Israeli youth chants "death to Arabs" and "burn their village!" Sadly, the majority of the Israeli society seems content with nationalist Zionist patriotism. 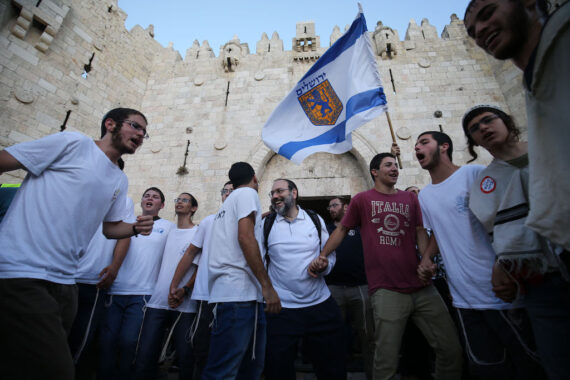 Ruhama Marton, M.D., born in Jerusalem before Israel’s creation, founded Physicians for Human Rights-Israel 33 years ago As someone who has worked tirelessly her entire life for human rights and equality in historic Palestine, I wanted to hear her views about the radicalization of Jewish Israeli youth, especially in light of the most recent Israeli aggression in Gaza and the West Bank and the mobs attacking Palestinians in mixed Israeli cities.

Over the last 10 years or more, coinciding with Netanyahu’s leadership, “nationalism” has become synonymous with “patriotism.” Ruhama explains that being a Jewish, specifically Zionist patriot is at the heart of this radicalization. If you are not a Zionist, you are not a patriot; you are a traitor or antisemitic yourself and therefore not “one of us.” As in all extremist movements, when the language of “us and them” becomes the standard to speak about right and wrong, there is already a disregard for humanity and dehumanization of the ‘other.’

In recent decades, the Zionist Israeli collective has been deeply influenced by the growing power of religious Israeli Jews. Ruhama explains that being “Religious” is not about theology, but centered on slogans such as “Elohim Hiftiach lanu et Haaretz”, G-d promised us this land. This, as a concept, is enough for these radicalized Jews. The focus on G-d’s promise is a call to action, producing psychopathic behaviors in these followers, without moral limits. These religious Zionists settlers are entitled to do whatever they like. In fulfilling G-d’s promise, they may kill and burn people alive, and vandalize homes, businesses, and houses of worship. Everything is legitimized by this slogan.

Read: Say This, Don’t Say That: Time to Confront the Misleading Language on Palestine, Israel

Ruhama remembers the small Zionist left that understood right and wrong and behaved morally. But being both “created such a headache.” How can you be both Zionist and a leftist? Jewish state or democracy? Jewish rights or equal rights? Though some still call themselves Zionist leftists, they sadly have no idea that they are irrelevant and their sense of right and wrong and their Zionism is dead.

With G-d on their side, right-wing fascist religious Jews don’t have these problems because there is nothing to determine if something is right or wrong. These ideas don’t exist within this framework. And because the vast majority of Israeli society are Zionists, there is no one to stop the madness. From young teenagers to the elderly, they are emboldened to do what they want.

Netanyahu’s outgoing right-wing government fueled these sentiments because the settlers’ actions work for the government politically. They need the religious settlers to build power, working in tandem, in their own ways, to fulfill the ‘promise’ of Greater Israel by making life unbearable for Palestinians through intimidation and violence. For the Israeli government, this is a practical way to clear out the Palestinians and finally achieve the goal of the land without Palestinians.

To understand the radicalization one must understand the history and context of the settlement movement. Israeli settlers treat the whole of historic Palestine as a settlement. Settlers are supported by the government, protected by the army, and funded by American Jews to create illegal enclaves all over the West Bank, keeping Palestinians from their lands and fulfilling the goal of making the land for Jewish people only. The settlers act in the interests of the government and their own, as a paramilitary force, helping Israel in its quest for territorial expansion.

Settlers have turned to buying houses in ‘mixed cities’ as a base to threaten, harass, and harm Palestinians, creating an untenable situation for Palestinians in places like Jaffa, Lod, and Acco, while simultaneously continuing these violent efforts in Hebron and Sheikh Jarrah. Some Palestinians with resources might eventually leave, but others can’t, nor should they be forced to. I asked about the role of the Israeli police. Ruhama confirmed that the police are not (yet) initiating attacks on Palestinians because they don’t have to. The settlers do the work while the police either actively protect them or turn away when Palestinians face vandalism and lynchings. When Palestinians need them the most, it is as if the police don’t exist.

Sadly, the majority of Israeli society seems content with nationalist Zionist patriotism. Younger people, who lack any contact with Palestinians, have been taught that Palestinians are the enemy, and Israel the victim. The right-wing government blames and dehumanizes Palestinians while claiming to protect Israeli Jews from internal and external enemies.

Israelis see the success of the religious extremists and don’t question the larger moral and ethical issues related to the occupation. There is no space for that consciousness to exist. Regardless, the society is still responsible for its behavior.

Ruhama mentioned the small minority of Israeli Jews who are moved by the immoral actions of the apartheid regime, who say “no, we do not agree.” However, this group lacks influence. Before our conversation, I received an important and unprecedented statement circulated by Israeli Jews calling for the decolonization of historic Palestine. It says, as Ruhama did, that nothing will penetrate Israeli hearts and minds.

The efforts of so many to do so from the inside has been a waste of time. The only course to address the future of Israel and Palestine is unapologetic international pressure, for example by following Palestinian civil society’s call for Boycott, Divestment, and Sanctions. But international pressure has not reached the tipping point required to make this apartheid regime fall like in South Africa. Australian Jews, U.S. Jews, and others are adding their names for decolonization alongside what Palestinians have demanded for decades and what some Israeli Jews are sending out as a message for help from outside.

What could the future look like? Ruhama said that if the International Criminal Court in the Hague would take Israel to task, this could be a game-changer. Both hopeful and hesitant with leadership changes in the ICC, she is going to see what will happen. She believes that international pressure on South Africa helped turn the tide, and that this is the only reality that can change Israel’s course.

It is not easy to imagine the transformative and healing process to change the Israel of today into a decolonized space, or how to address the harms that Israel has done. Ruhama agreed that South Africa’s Truth and Reconciliation Commission might not be an exact fit. She is clear that the process will be long. She believes what would work is to give Palestinians all the political, social, cultural, and economic rights that Jews enjoy, including the right of return and reparations.

And although money cannot undo injustice, it is a part of addressing wrongs. She recalls from her own past how Jews and Palestinians once lived together. She is not concerned about everyone loving one another, because there are plenty of people not to love – “where there is no big love, there is no big hatred.” Her main concern is that there be mutual respect and a sense of common humanity, to create a community that can thrive.  And this is down the road, after the harms have been addressed, and everyone has access to the same rights.