Meloni wants to end Italy’s ban on nuclear power and her party, Brothers of Italy, seeks to up Italy’s birth rate with increased family allowances. 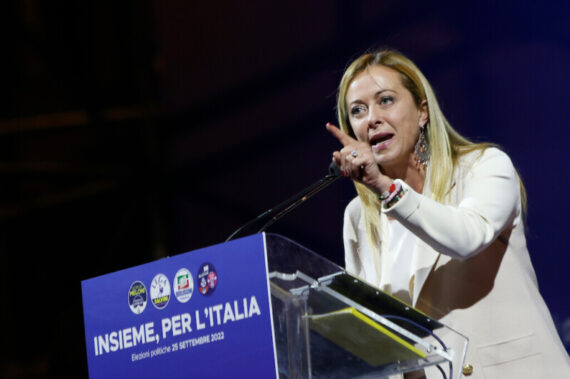 wo months after the collapse of Mario Draghi’s unity government, Giorgia Meloni, a far-right candidate, is set to become the first woman prime minister in Italy.

The roots of the Brothers of Italy— Giorgia Meloni’s party—in the Italian Social Movement (MSI), known to be the successor of Mussolini’s fascism, sparks debates about the implications of her leadership and policies.

Italy had no comparable de-Nazification process to Germany whereby the fascist parties were enforced to reform. The logo of Meloni’s party maintains the tricolor flame, perceived as the fire burning on Mussolini’s tomb; however, Meloni strongly rejects any fascist label.

As a teenager, she participated in the youth wing of Italy’s neo-fascist movement. In 2008, Meloni served as Italy’s youngest-ever minister. In 2012, she founded Brothers of Italy (Fratelli d’Italia) as a right-wing, populist, and national-conservative political party. In the last election that took place in 2018, she won 4.4% of the votes.

On the Sunday snap elections, Brothers of Italy garnered around 26% of the votes. Her right-wing alliance with Matteo Salvini (Northern League) and Silvio Berlusconi (Forza Italia) gives the right a majority in parliament, claiming both the Senate and the Chamber of Deputies with around 44% of the vote.

The lack of an electoral coalition between the center-left Democratic Party and the Five Star Movement in a disproportionate system allows them this majority. Meloni’s government is to form Italy’s most right-wing government since World War II.

Read: How a Ship Lays Bare the True Face of Italy’s Far-Right

Meloni’s campaign ran on the preservation of Christian identity and the “traditional” family, and Italian patriotism under the slogan of “God, family and homeland.” In a rally of the Spanish far-right Vox party Meloni stated, “Yes, to the natural family, no to LGBT lobbies!”

Her views on abortion and migrants bring concerns to many. The leader has pledged to impose a naval block on Libya and push back “masses of illegal immigrants.” Her coalition partner Matteo Salvini closed migrant camps and blocked boats carrying migrants rescued from the Mediterranean from entering port when he was interior minister.

At the same rally in Spain, she continued, “No to Islamist violence, yes to secure borders, no to mass migration… no to big international finance… no to the bureaucrats of Brussels!”

Meloni also vows to put Italians’ interests above everything in the EU. Some critics frame her prime ministry as a danger to the EU, often comparing her to Viktor Orbán of Hungary who is often in the headlines due to his quarrels with the EU.

However, it is important to note that Italy is dependent on EU funds which it has little interest in putting at risk, especially at a time of energy and living crises. Italy suffers one of the worst impacts of the pandemic and recession in Europe, and receives the heaviest portion of the EU recovery fund.

Meloni has pledged tax cuts on energy and other essential items to curb economic issues, and has promised to introduce a flat tax for the self-employed and renegotiate Italy’s massive EU COVID19 recovery plan.

She also wants to end Italy’s ban on nuclear power. Meanwhile, her party seeks to up Italy’s birth rate with increased family allowances.

Brothers of Italy are mostly experienced in local government. At a particularly challenging time to ascend to government, the party has a lot to prove by tackling large-scale issues like the economy.