As China rises, NATO finds itself at unease. 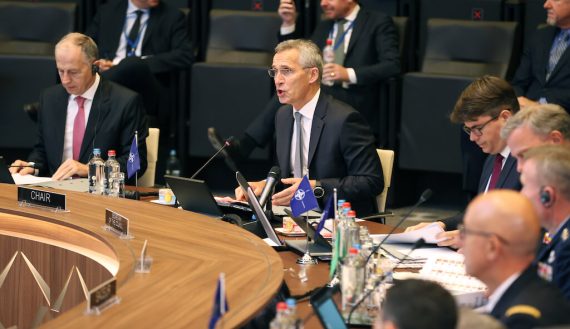 NATO Secretary General Jens Stoltenberg speaks at the Summit of NATO's Defense Minsters held in Brussels on October 22, 2021, where he warned against 'the Chinese threat'. Photo by Dursun Aydemir. Anadolu Agency.

In his interview with the Financial Times on 14 October 2021, NATO Secretary-General Jens Stoltenberg noted that the increased power of the People’s Republic of China (PRC) on the world stage necessitated an update to NATO’s geostrategic contingency planning. Stoltenberg envisaged inclusion of the implications of China’s rise as part of the agenda for NATO’s forthcoming Strategic Concept.

Inasmuch as the latter marks the grouping’ formal identification of its agenda of geostrategic concerns, inclusion of China underscores the transatlantic alliance’s apprehensions over the implications of the increasingly assertive foreign policy behavior of the Chinese Communist Party (CCP) and Beijing’s superpower ambitions.

Although Stoltenberg did not explicitly refer to China as a prospective adversary for NATO, the overall geostrategic context outlined by the Secretary-General reflected the unease with which the transatlantic alliance views the rise of China. Stoltenberg’s statement underscores the multifarious instruments of power that give Beijing enhanced capacity to undertake strategic coercion against the transatlantic alliance. Apart from the rapid growth in China’s nuclear and conventional military capabilities, China has also invested in a range of unconventional instruments of statecraft that, even whilst ostensibly civilian in nature, grant Beijing enhanced leverage and influence.

For instance, it is notable that Chinese infrastructure funding is granted with the expectation that recipients of such investment reciprocate through the adoption of pro-Beijing quid pro quos. European countries have not been spared from the growing impact of Chinese economics-based influence operations; for instance, China’s establishment of a factory in Germany for the production of batteries for electrical cars is aimed at ensuring market-share dominance in Europe, whilst simultaneously underscoring Beijing’s ability to put European jobs at risk.

Countries that have dared to defy China, such as Australia, Canada and the ROK, have found themselves on the receiving end of Chinese economic retaliation.

Concurrently, countries that have dared to defy China, such as Australia, Canada and the ROK, have found themselves on the receiving end of Chinese economic retaliation. Although China has pitched its ‘One Belt, One Road’ (OBOR) initiative as an opportunity for enhancing commerce between Europe and Asia, the underlying reality is that the OBOR enables China to tighten its economic leverage over much of Europe and Asia.

Elsewhere, the PRC has exploited the anonymous nature of cyberspace and the transatlantic community’s commitment to democratic values and freedom of speech. Beijing has invested in its cyberwarfare capabilities for a range of tasks that include espionage, election meddling, and the development of AI and facial recognition facilitate political persecution in Xinjiang and Hong Kong.

China’s increased net-savviness is reflected in its use of social media, exemplified by the ‘Wolf Warrior’ breed of militant diplomats, the ‘Fifty Cent Army’ of paid, pro-CCP internet trolls, and foreign-born, pro-CCP social media influencers, for highlighting the governance shortfalls in Beijing’s adversaries, whilst simultaneously covering up China’s own shortcomings in governance.

Although the notion of China as a threat to NATO may seem counter-intuitive given the PRC’s geographic distance from the transatlantic alliance and the regional nature of China’s power projection capabilities, it should be emphasized that the Chinese threat to NATO interests is not a direct military one in the manner of the Soviet Cold War threat.

The CCP is aware that attempting to project direct military power against the transatlantic alliance’s heartland, so far from China’s bases of power, is a fool’s enterprise. Rather, China is seeking to neutralize NATO members’ autonomy in their formulation of diplomatic and security policy – in particular, their ability and willingness to deploy their armed forces outside the transatlantic region in support of U.S.-led security initiatives.

Recent years have seen increasing numbers of NATO members joining US-led Freedom of Navigation (FONOPs) air and naval activity in the South China Sea and in the vicinity of Taiwan. Such developments, in conjunction with stepped-up joint military exercises between NATO members and regional states in the Indo-Pacific – including the members of the U.S.-led Quadrilateral Security Dialogue (or ‘Quad’), portend the prospective scenario of European NATO members contributing combat assets to a U.S.-led coalition against China in an Indo-Pacific security flashpoint.

Recent years have seen increasing numbers of NATO members joining US-led Freedom of Navigation (FONOPs) air and naval activity in the South China Sea and in the vicinity of Taiwan.

The Quad brings together the U.S., India, Japan and Australia – the most powerful democracies in the Indo-Pacific region, all of whom have strained relations with China. The expanded ‘Quad-Plus’ brings on board the ROK, New Zealand and Vietnam as additional security partners. Combined with the extent of Chinese dependence on its export markets to Europe, the CCP is wary of the possibility of China becoming diplomatically, economically and geostrategically outflanked by a U.S.-led partnership that combines the U.S.’s NATO partners, the Quad-Plus, and pro-U.S. members of ASEAN (in particular, the Philippines, Singapore and Vietnam, all of whom have increased the extent of their security cooperation with the U.S.).

Under such circumstances, China is attempting to develop non-military tools of coercion – in particular, economic influence and cyberwarfare – through which Beijing can subvert the democratic values of NATO members, sow discord in the transatlantic alliance, and thus neutralize any prospective scenario of a U.S.-led global effort that combines NATO’s assets with the existing U.S. security infrastructure in the Indo-Pacific.

Within the broader geostrategic context, NATO has further reason to affirm its alignment with the U.S. against China. The decades of European NATO members’ under-investment in their defense capabilities has resulted in a situation wherein NATO is dependent on the U.S. for their own security. Such dependence was highlighted by the abrupt nature of the U.S. withdrawal from Afghanistan, with European NATO members reduced to the status of helpless bystanders in the face of the Biden Administration’s pullout.

This development comes amidst the unease that European NATO members – in particular, the former Communist states of Central and Eastern Europe – of the prospective scenario of a resurgent Russia that has increased its investment in conventional force modernization, cyberwarfare, and hybrid warfare capabilities. Set against this threat, European NATO members are all too aware of their dependence on the U.S. in the event that the new ‘Cold War’ with Russia were to turn ‘hot’.

Under such circumstances, it is logical that NATO members align themselves with the U.S.-led efforts to contain China, in order to affirm the standing of NATO as allies of the U.S. that Washington is treaty-bound to protect in an East European security contingency.

Inasmuch as Stoltenberg’s statement reflects NATO’s concerns over the rise of China as a potential threat to the transatlantic alliance, it will be necessary for the latter to adopt a deft balancing act. On the one hand, China’s increasing assertiveness marks a direct challenge to the democratic principles that underpin the transatlantic alliance; on the other hand, critical global issues, in particular the threat posed by climate change, are too complex for the U.S. and its partners to ‘go it alone’, given the ability of China to act as a ‘spoiler’ to block international cooperation on issues of shared global concern.

Whilst it may be necessary for the NATO’s forthcoming agenda to acknowledge the geostrategic implications of the rise of China, it will be concurrently necessary for the U.S. and its partners to simultaneously keep the door open for cooperation with the PRC on such areas of common global interest.