The Quad and Japanese Nationalism: The Genie Is out of the Bottle

Once the nationalism genie is out of the bottle, it is difficult to put it back in. Nationalism and militarism have got out of control in Japan before, with disastrous results. Only time will tell if history is repeated. 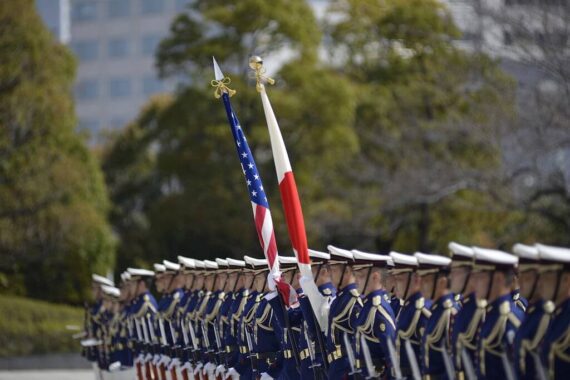 U.S. and Japan national flags flutter in the wind as Lloyd Austin, Secretary of Defense of the U.S. and Japanese Defense Minister Kishi Nobuo attend a review an honor guard prior the US-Japan Defense Ministers Bilateral meeting on March 16, 2021 in Tokyo, Japan. Photo by David Mareuil, Anadolu Images

The war drums are beating loud and hard in the Asia Pacific region. The rivalry between the U.S. and China has been escalating, and is more and more referred to as a new Cold War. Of course, the U.S. and its allies say they are “responding” to Chinese “aggression” to defend freedom and justice – a narrative that is amplified by a compliant media.

Just one manifestation of the new Cold War is the Quadrilateral Security Dialogue, often referred to as the Quad. Created in 2007, it is an ongoing informal dialogue between Australia, India, Japan, and the United States. From the outset, the Quad has been characterized by open hostility towards China and its increasing influence: that is obvious from the countries involved, their insistence on the hitherto nonexistent term “Indo-Pacific” to describe the region, and the fact that talks have been accompanied by joint military exercises on an unprecedented scale.

It is little wonder that China sees the purpose of the Quad as surrounding the country with hostile neighbors, which claim “defensive lines” practically at the Chinese shore. Essentially ignoring Chinese and other protests, provocative large-scale naval exercises continue. However, besides military and other co-operation, perhaps one of the main achievements of the Quad so far has been its success in reframing the terms of the discourse.

The 2021 statement of the leaders of the Quad trumpets their “shared vision” for an Indo-Pacific that is “free and open” and operates on a “rules-based order” – a language that has been repeated over and over by the international media, reinforcing the framing of the Quad as the purported defenders of freedom and justice. The Quad’s statement does not mention China, because it doesn’t have to – it is well understood by all what the unnamed “threats” to the above are. All of this serves to shroud the obvious intentions of the four countries (in particular the U.S. and Japan) to maintain their hegemony over the region.

To be clear, none of this is to defend the current Chinese system of governance, or the gross human rights violations perpetrated by the Chinese government. Nor is it to argue that there is no potential security threat posed by China. However, serious doubt should be cast on the narrative that the governments of the Quad are knights on white horses defending the free world from the yellow menace. For better or for worse, China is doing what any country does: demanding a global status it believes is commensurate with its might.

It may indeed be the case that, in the eyes of many in the world, the political system of Western liberal democracy is being challenged by the more authoritarian Chinese model. However, it is submitted that this is due less to Chinese successes and more to Western failings. The hypocrisy of the West in claiming that they defend democracy while they engage in military interventions throughout West Asia and Africa, slam their doors in the face of refugees, and provide the apartheid state of Israel with endless support, is plain for all to see.

While China has raised millions of its citizens out of poverty, Western economies remain geared towards exploiting the many for the greed of the few. And while respect for civil and political rights is certainly abominable in China, the perpetual “war on terror” has exposed the fragility of human rights in many countries in the West as well – not to mention the rise of near-overt fascism in the U.S. under Donald Trump. Facile concepts of “good guys versus bad guys” are not applied easily in the current Asia Pacific.

The Quad is a Japanese initiative, and while it is in part a response to increasing Chinese influence, it is important to understand that there are other dynamics at play.

Post-World War II Japan is a strongly pacifist country. The postwar Japanese Constitution, adopted in 1946 under American occupation, states that the “Japanese people forever renounce war as a sovereign right of the nation and the threat or use of force,” and announces that Japan will not maintain military forces. Japan does have a military (formed under U.S. occupation), but it is euphemistically called the “Self Defense Force.”

It is subject to various political constraints, making it, in particular, politically difficult to operate abroad or to procure weapons commonly viewed as offensive in nature. Japan remains a forward base for U.S. forces in the Pacific, with as many as 100,000 personnel stationed there and wide-ranging freedom for American forces even to fly over central Tokyo at will (leading many Japanese to compare their situation with a military occupation). However, Japan remains a junior partner in the military alliance with the U.S., and for many decades was content to take a back seat in security-related fora.

This has changed dramatically since the late 2000s, as Japan’s (and the United States’) relative power has declined. Japan’s speculation-fueled “bubble economy” burst in 1989, and since then, inept economic management, weak political leadership, and endemic corruption have meant that economic growth has been stagnant. Employment has become increasingly precarious for many, and real wages have been on a declining trend throughout what are now often referred to in Japan as the “lost thirty years.”

The overtaking of Japan by China in 2010 as the world’s second largest economy was a potent symbol to many Japanese of their country’s ongoing plummet, and of the end of the era where they dominated Asia economically. Though Japan remains the world’s third wealthiest country in terms of GDP, a shrinking population adds to a strong sense of continuous decline.

The Japanese right wing has been quick to exploit this social malaise, claiming (like in many other countries) that so-called traditional values is the answer – a return to an allegedly golden era when men were men and women knew their place. In particular, from nearly the get-go the pacifist postwar constitution has been the bête noir of the right, which has portrayed it as a national humiliation and the defanging of the Japanese military as a castration of the Japanese spirit.

Read: What Is China’s Endgame in Northern Iraq?

Since the early 2000s, China has served as a convenient boogeyman, with the alleged “Chinese threat” being a constant feature of their campaigns. Though public support for pacifist policies generally remains strong, the right has been successful in shifting the discourse, ensuring a seemingly endless stream of references to this “threat” in political fora, the media, and popular publications.

Advances of the right under Shinzo Abe

In particular, the premiership of Shinzo Abe (who initiated the Quad in 2006) from 2012 was a watershed. A committed ideologue, Abe and his political allies have strong connections to shadowy right-wing organizations, many of which are committed to a return to the prewar order: worship of the emperor, militarism, and eradication of “Western values” and “individualistic” human rights.

True to form, Abe’s premiership was characterized by assaults on democratic institutions, the promotion of militarism, and the ramming through of oppressive legislation purportedly aimed at protecting national security (such as laws establishing vague crimes of conspiracy). Schoolchildren would be marked on the level of their patriotism, and Japan’s press freedom ranking plummeted from a high of 11 in 2010 to 72nd place in 2016 (61st place in 2021) as Abe set heavy penalties for both journalists and private citizens who publish leaked government information designated “secret.” Throughout this period, the “Chinese threat” served as an implicit (and, at times, explicit) justification for these measures.

Abe is no longer PM, but he remains an influential figure of the right, and, more importantly, the bullish nationalism he promoted seems here to stay. The anti-Chinese discourse has been amplified throughout the COVID-19 pandemic, with the right-wing press constantly referring to the “Wuhan virus” and parroting Donald Trump’s anti-Chinese fabrications.

In fact, the Japanese right is fundamentally contradictory. Domestically, they campaign against human rights and other “Western values” that were allegedly forced upon Japan after the war. However, in international relations, they are staunchly pro-American, and see Japan’s future as within the military alliance with the U.S. Hence the ease with which they make claims at the Quad and other international fora that Japan stands with its Western allies for human rights and democracy (as opposed to China of course).

This contradiction can be traced to the history of Japan’s modernization process (which has similarities with Turkey), and perhaps a postwar colonial mindset (idealizing the vanquisher). Whatever the psychology, it is clear that the right has been using China as a scapegoat to advance their repressive agenda.

Therefore, to look at the Quad – and other recent security-related initiatives by Japan – solely through the prism of strained relations with China is to miss an important part of the picture. Like nationalists everywhere, the Japanese right has been exaggerating the “Chinese threat,” and right-wing politicians have been milking it for their own purposes.

Of course, China remains one of Japan’s largest trading partners, and the economic interdependence of the two countries makes talk of open war somewhat farcical. Japanese big business in particular is against provoking China – a fact that most politicians, dependent on large corporations for political donations, are acutely aware of.

The problem is that once the nationalism genie is out of the bottle, it is extremely difficult to put it back in. What is truly under threat in Japan is not the nation as such or its “traditional values,” but democratic institutions and human rights. Nationalism and militarism have got out of control in Japan before, with disastrous results. Only time will tell if history is repeated.

VIDEO: Who Are the Quad and Why Are They After China?