Trump moving the U.S. embassy to Jerusalem, legitimizing Israeli settlements, and brokering normalization agreements between Israel and the UAE and Bahrain, did not dramatically shift Jewish voting. 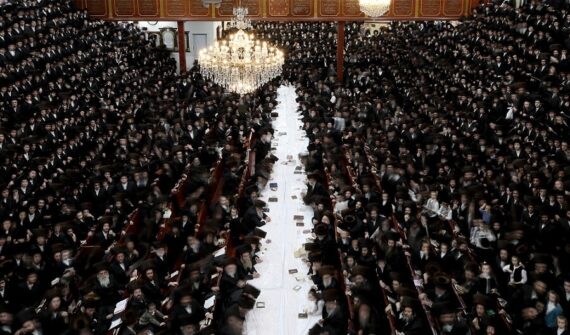 Satmar Jews gather to celebrate the Sukkot, the Feast of the Tabernacles, in New York, United States on October 22, 2019. Photo by Tayfun Coskun, Anadolu Images

While we continue to watch Trump’s disregard for the U.S. democratic election process and unwillingness to concede to President-elect Biden, how Jewish Americans voted gives some indication about the significance of Biden’s win and the opportunity to roll back Trump’s policies and disregard for humanity on national and global levels.

Jewish Americans are a religious and cultural minority that most closely aligns with the social, economic, and political priorities of the Democratic party. In the Jewish Electorate survey, Jews supported Biden over Trump at a higher rate than the general population. A J Street poll showed support for Biden 77%-21%, a 56% margin. The Jewish electorate has broad ideological commitments, including to many progressive causes. Factors pulling voters to the right include assimilation, economic class, religious conservatism, and Israel policy. Because of strong voter turnout, Jewish voters, though a small minority, can be a factor in pushing a candidate over the line in a swing state or in a tight race such as the January 5th Georgia U.S. Senate runoff elections which will determine the Senate majority.

The U.S. Jewish population, the world’s largest at about 7.5 million, comprises 2% of the U.S. population but between 2-5% of the electorate. The majority of Jewish Americans are white and Ashkenazi, however, the Counting Inconsistencies study estimates that 12-15% are Jews of Color, Black, Latinx, or other. The majority of Jewish Americans who vote Democratic identify as Reform, Conservative, Reconstructionist, secular, unaffiliated or with no religion, while orthodox Jews make up 10-12% of Jewish Americans. Ultra-orthodox Jews principally vote Republican, backing Trump on Israel and conservative religious issues. Sephardic voting patterns are less clear, since it is ambiguous whether Sephardic Jews identify in surveys as Hispanic or Middle Eastern or otherwise nonwhite, and whether they identify with a particular Jewish religious stream. In terms of influence on political campaigns, 15 of the 25 major donors to 2020 Republican and Democratic presidential and other campaigns are Jewish or have Jewish ancestry. However, it is imperative not to conflate major donors’ personal priorities with those of a broad and diverse Jewish electorate.

Surveys can shine light on how Jewish voters cast their ballots while saying little about their deeper commitments. Pre-pandemic, the progressive Jewish organization Bend the Arc found that “[i]n an open-ended question about what matters most about next year’s elections [2020], the most common response is defeating Donald Trump.” An increase in Jewish political activism was directly related to how Trump dangerously emboldened white supremacy, racism, and antisemitism, enabled by the Republican party. Jewish support for Biden was the safest option.

According to a pre-election American Jewish Committee survey, the majority supported Biden and strongly disagreed with Trump’s actions. Domestic issues such as COVID-19 and health-related issues were the most important issues in choosing a candidate, followed by the economy and race relations. Foreign policy, even about Israel, was not among the most critical issues for Democratic voters. Similarly, Windmueller explains that Jewish voters prioritize the U.S.’s well-being over Israel.

Jews are gathered in front of the New York Public Library on 5th Ave. to protest anti-semitism as 'End Jew Hatred' in Manhattan of New York City, United States on October 15, 2020. By Tayfun Coskun, Anadolu Images

Most Jews felt less safe than the four years prior due to rising antisemitism, exemplified by Ku Klux Klan (KKK) and Neo-Nazi marchers in Charlottesville and the deadly shootings at the Poway and Tree of Life synagogues. The shock and horror of George Floyd’s murder also brought with it a new understanding and commitment to fighting against anti-Black state violence.

An especially problematic feature of the Trump years has been the overt conflation of Jewish Americans with Israel under the guise of support for Israel. Trump told Jewish voters “we love your country,” and that they should vote for him because he “stood with your prime minister” (referring to Israel and Netanyahu). This ultimately endangers Jewish Americans by exposing them to antisemitic accusations of dual loyalty.

In fact, Jewish Americans have become more critical of Israel and Israel is a top-two concern for only 5% of J Street poll participants. With that said, however, since both candidates expressed a commitment to Israel, Jewish voters were not faced with a difficult choice related to Israeli policies. Were a presidential candidate to express genuine support for Palestinian human rights and equality, as Bernie Sanders did, we might have seen whether Israel would have emerged as a more significant issue.

Trump moving the U.S. embassy to Jerusalem, legitimizing Israeli settlements, and brokering normalization agreements between Israel and the U.A.E. and Bahrain, did not dramatically shift Jewish voting. Though some Jewish voters sided with Trump, even some Republicans (e.g., at the online gathering Jewish Republicans for Biden – Putting Country over Party) expressed worry over the fallout of irresponsible Middle East policies as well as Trump’s lack of moral character.

The Republican Jewish Coalition reports that Trump received 30.5% of the Jewish vote. The discrepancy between this number and J Street’s data could possibly be due to the organization’s political leaning and polling methodology which tilts toward an older and conservative population. It’s no surprise that the economy, Israel, and foreign policy weighed heavily for Trump, while support for Biden highlighted character and addressing COVID-19. Additionally, the ultra-orthodox and a quarter of modern orthodox supported Trump because of the administration giving Israel carte blanche. The U.S. administration’s diplomatic recognition of Israeli violations of international law indeed wooed some hawkish Jewish voters. Democratic voters might accept or even agree with these policies, but they do not determine their presidential choice.

While most Jewish Americans continue to find a home in the Democratic party, the makeup of the Jewish community is changing. Mainline Jewish institutions are losing their influence and relevance while movements like Black Lives Matter are capturing the ideological imagination and providing the leadership and home that radically inclusive, intersectional, young, Black, Indigenous, Jews of Color, Sephardic and Mizrahi Jews (BIJOCSM) and other progressive Jews are seeking.

These movements unapologetically support justice for Palestinians and oppose harmful U.S. foreign policies. These activists will increasingly engage with the progressive wing of the Democratic party, working tirelessly to get out the vote even for a centrist Democrat such as Joe Biden because they know their lives depend on it, and in the hope of advancing a broader and more meaningful, transformational progressive agenda.

The majority of Jewish Americans continue to vote for the Democratic ticket as they have for decades. It remains challenging to measure what this vote actually means beyond support for the Democratic party platform. The surveys are limited, their questions constrained by the framework of the two-party system and the priorities of surveying organizations, rather than providing a true, in-depth analysis of what Jewish voters, in all their diversity, support.

For now, the results tell us that the majority of Jewish Americans wanted anything but Trump and his Republican enablers.