While Democrats might take comfort and be tempted to view the horrid Trump administration as an aberration, Trumpism is far from being defeated. 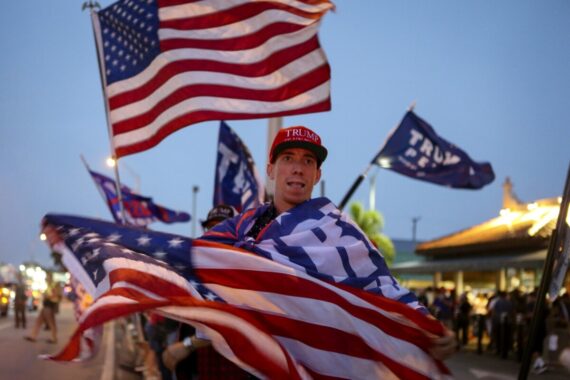 Trump was only elected in the first place through a quirk in US electoral politics which allows a candidate to attain the presidency despite having lost the popular vote. In 2016, Democratic presidential candidate Hillary Clinton bested Trump by nearly three million votes, yet he cruised to victory by a whopping 306-232 margin in the electoral college.

This anti-democratic electoral college, along with the Senate, is a vestige of the Founding Fathers’ original Faustian bargain with states that enslaved human beings. It enticed them into a federated republic without fear of losing their chattel by establishing a system through which the smaller electoral base of slave states could exercise disproportionate influence over federal policy.

While slavery was belatedly abolished only in 1865, the electoral college and Senate still play much the same role as originally envisioned: to buttress white supremacy by attaching disproportionate electoral weight to thinly-populated, overwhelmingly white, conservative states to the disadvantage of more populous, diverse, and liberal states. To take the most egregious example, votes in Wyoming are weighted 3.6 times more than votes in California.

Read: From the Nixon-Reagan Tapes to Trump’s Tweets: Racism Has a Tradition in US Politics

While Democrats might take comfort in this fact and be tempted to view the horrid Trump administration as an aberration, Trumpism is far from being defeated.

First, let us start with the fact that Trump still has more than two months left in his term, during which he could inflict even further incalculable damage to the democratic system he has so assiduously undermined while in office. A peaceful transfer of power to the Biden administration is by no means guaranteed.

For months prior to the election, Trump openly signaled that a Biden victory could only be predicated upon fraud and that he would not accept the outcome should Biden win. Predictably, Trump has been true to form, declaring without a shred of credible evidence that the election was rigged. His slap-dash, risible lawsuits against the election results, even in states with Republican governors, have been tossed aside by judges wholly contemptuous of his claims.

Trump protesters gathered during the "Million MAGA March" from Freedom Plaza to the US Capitol in Washington, DC, United States on November 14, 2020. Photo by Tayfun Coşkun, Anadolu Images

Whether Trump is actually so delusional as to believe his claims is immaterial. The purpose of his delegitimization of the democratic process is to set the stage for a coup attempt should he decide to try to cling to power after his legal remedies are exhausted.

So far, the signs do not bode well for a peaceful transfer of power. Trump is being bucked up by a largely sycophantic Republican congressional caucus and a coterie of close advisers who are emboldening him not to concede, while his attorney general is disgracing whatever is left of his already badly-frayed credibility by lending credence to the president’s specious allegations.

Most troubling, Trump unceremoniously fired Defense Secretary Mark Esper via Twitter. Trump has loathed Esper ever since he opposed his efforts to invoke the Insurrection Act and mobilize troops to quell racial justice protests that erupted this summer after the police killing of George Floyd, an unarmed Black man, in Minneapolis.

Asked by the Military Times in an interview published a few days before his ouster why he did not do more to oppose Trump’s policies, Esper expressed concern at what would happen if he were fired. “Who’s going to come in behind me? It’s going to be a real ‘yes man.’ And then God help us.”

In Christopher Miller, Trump now has a loyalist in place who could be more amenable than Esper to acceding to a coup attempt.

In the first presidential debate, Trump told supportive white supremacist militia to “stand by.” If Trump decides to unleash them now in a last-ditch attempt to remain in power, the consequences could be catastrophic.

Even if Trump is coaxed out of the White House and Biden is able to assume the presidency in a modicum of normality, Trumpism is far from being a spent force.

Despite everything over the past five years since Trump announced his candidacy–his mocking of people with disabilities; his virulent anti-Black and anti-Latino racism, xenophobia, misogyny, Islamophobia, and antisemitism; his praise of authoritarians and rejection of democratic allies; his obstruction of justice and his solicitation of foreign government intervention in his reelection effort; his bungled response to the coronavirus pandemic which has now infected more than 10 million people in the United States and killed more than 250,000; his congenital lying, pomposity, braggadocio, bullying, buffoonery, sloth, incompetence, and ignorance–despite all of this and so many other blatant disqualifications to be president, the most perturbing aspect of this election is that more than 71 million people witnessed all of this and decided they wanted more.

Over the course of the disastrous Trump administration, many liberal (mostly white) people shook their heads despondently and muttered in disbelief that “this is not who we are as a country.” Yet Trump just won the second-most popular votes of any presidential candidate in the history of the country. Yes, Trump is an ugly reflection of all the worst history, policies, and proclivities of the United States in caricatured form.

Both the Democratic and Republican parties mobilized their bases in unprecedented numbers for the 2020 election, leaving the country even more diametrically polarized and deeply divided between liberal, diverse, urban and suburban islands in a sea of conservative, white, small-town and rural strongholds. Of course, there are exceptions to this over-generalization. For example, Lynchburg, Virginia, home of the Christian fundamentalist Liberty University, voted blue for the first time since 1946.

The election results also reinforced the tenacious and enduring reality of white supremacy. According to ABC News exit polls, white people were the only racial group to support Trump and his brand of white nationalism, and by a wide margin, 58 to 41 percent.

Steve Schmidt, a founder of the anti-Trump Republican super PAC (political action committee) the Lincoln Project, whose devastating ads riled Trump, thrilled the Democratic base, but apparently had little effect on its intended target of the mythical moderate Republican voter, perhaps stated best the sad legacy of Trumpism.

“Trump has been defeated, but Trumpism has not,” Schmidt told the Washington Post. “What Trumpism is is a statist, authoritarian ideology that’s inimical to the American precepts of democracy. It’s antithetical to America’s ideas and ideals, and it has fascistic markers. It is a cult of personality . . . and 70 million-plus people in the country were susceptible to it, to the racial antagonisms, to the assault on institutions and the rule of law, and it’s going to take a long time to deal with it.”

Joe Biden is now faced with the daunting prospect of trying to unite and govern this fractured polity. President Abraham Lincoln famously stated that “a house divided against itself cannot stand.” Believing that the country could not endure “permanently half slave and half free,” he nevertheless was optimistic that the country “will cease to be divided.”

Historians tend to agree that Lincoln was the greatest US president for his deft leadership of the country through its Civil War. Today, the United States is at perhaps its greatest divide since then. Clearly, Biden will need to summon Lincolnian levels of leadership if we are to consign Trumpism to the history books.

Also Read
When Lies Become Truths: How Trump’s Rhetoric is Reshaping America for the Worse