The just war doctrine is not perfect and there is an urgent need for a third way debate. 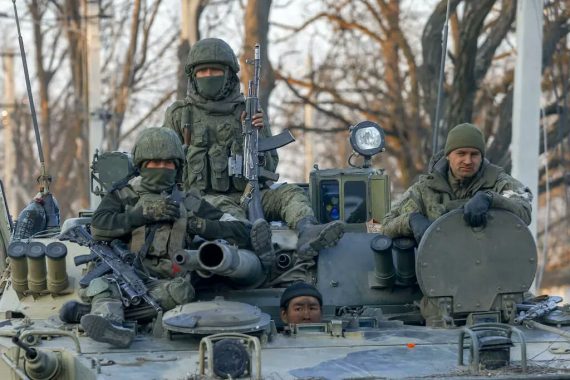 Russian soldiers are seen on a tank in Volnovakha district in the pro-Russian separatists-controlled Donetsk, in Ukraine on March 26, 2022. Photo by Sefa Karacan, Anadolu Images

The just war doctrine debate goes back to the Middle Ages, when philosophers and theologians linked to the Roman Catholic Church, such as Augustine of Hippo in his encyclopedia on the city of God against the pagans (De civitate Dei contra paganos), commonly referred to as The City of God and Thomas Aquinas in his theological compendium Summa Theologica (Summary of Theology), provided theological justifications for waging wars. These wars were seen as a necessary evil by the Church to bring about better outcomes and justice, and to help those who the Church saw as worthy.

The reason the Church had to justify going to war was that as a pacifist institution being involved in wars was against its founding principles. Thus, the Church and its theologians introduced new concepts such as the theology of liberation, which was understood as the liberation of an oppressed people, justifying war as a last resort to achieve justice.

The theology of liberation manifested itself in the form of crusades—wars in the Middle East to save Jerusalem and Eastern Christians from what the Roman Catholic Church at the time saw as “oppression” by Muslims. For the Catholic Church, their crusades were “just,” but for people in the Levant, including large sectors of Christians, they were simply unjust.

It is important to note that when the crusaders arrived in the Levant, certain Christian groups fought alongside Muslims to repel the invading forces. Also, when the same Catholic Church revived the theology of liberation in the1960s in Latin America, in an attempt to explain the role, the Church should play in public life and politics, it was faced by a strong opposition by theologians linked to centers of power and government. Subsequently, when Pope John Paul II visited Nicaragua in 1983, he called for the removal of five priests from their jobs over their liberation theology advocacy.

The doctrine of just war

Michael Walzer, an American philosopher and the leading figure of the just war theory, outlines his approach in his well-known book Just and Unjust Wars, published in 1977, and still widely read today. Walzer speaks of two stages of war: jus ad bellum, the conditions leading to war, and jus in bello, the rules governing conduct during war. The first stage of just war requires meeting specific conditions before going to war, namely a just cause, a right intention, a legitimate authority, proportionality, and making war a last resort.

Still challenging, defining a just cause is subjective, and it could differ from one person and one actor to another (state or non-state). For the crusaders, waging a war was a just cause to “save” Christians. For the people of the Levant, including some Christians, these wars were unjust, and the crusaders had to be fought off.

Add to this, interpreting intention is subjective too. The same applies to the existence of a legitimate authority to wage a just war. In some colonial contexts, such as in Lebanon and Algeria, loyal authorities were installed by the colonial powers. This applies to France as well when the French government loyal to the Nazis assumed power during the Nazi occupation of France. French resistance against the Nazis included the French Communist Party, which refrained from opposing French settler-colonialism in Algeria.

In the same vein, the just war doctrine argues that the proportional measurement of the outcomes of a war should bring about much better results than the evils and potential losses of this war.

These expectations and outcomes could also go wrong. Calculations of the consequences of war could differ greatly especially in today’s world, with access to more destructive weapons, including nuclear warheads.

Read: Liberation Legitimacy: How Far Does It Count?

We have seen how a spark can lead to a world war when the assassination of Austria’s Archduke Franz Ferdinand led to the outbreak of World War I. Of course, there were underlining reasons such as nationalism and expansionism, but nonetheless individual acts were also important to the buildup to war.

There are instances, especially in the context of anti-colonization struggles such as the National Liberation Front (FLN) of Algeria, where all attempts at dialogue for the withdrawal of the French failed. This lack of will to end colonial rule peacefully has left the colonized people with no other option but to take up arms against their oppressors.

The concept of a war as a last resort is a matter of interpretation as state actors—in the above case, colonial authorities—can always claim the absence of a partner for reaching an agreement to prevent a war. A prime example of this is Israel which puts forth the “absence” of a Palestinian partner as its excuse for not engaging in the process to achieve a sustainable and long-term peace.

Despite the principles of jus in bello, in almost all wars, whether waged by state or non-state actors, civilians have always, directly and indirectly, fallen victims of attacks carried out by parties that claim to be fighting a just war.

In many instances, the response of colonial authorities to the colonized people was so brutal that it left scars on civilians for years to come such as France’s response to the May 1945 protests, where nearly 45,000 Algerians and 86 European settlers/soldiers were killed.

Israel’s use of force against Palestinians is another example of this colonial violence where in all confrontations to this day, the number of Palestinian victims has always been unproportionally higher. In fact, in many instances, even a comparison is impossible. Equally important, attacks against military targets located in civilian areas have also been documented in Palestine, Iraq, and Afghanistan, where the harm is undoubtably and disproportionately higher than the benefits.

The third way: justice as an end

It appears clear that the just war doctrine is not perfect and there is an urgent need for a third way debate that moves beyond the confines of a just war, on the one hand, and terrorism, on the other. This is true because the theory of a just war, despite including state and non-state actors, is still widely a state-centric theory. At the same time, many non-state actors seem on the defensive and don’t have the privilege of choosing their own designation. Both theories of just war and terrorism are western-centric, in as much as the agency of the colonized people is trivialized.

The third way theory should seek justice as an end, based on two important principles: people’s right to self-determination, and stressing the agency of non-state and state actors alike, by setting the rules of conduct during armed conflicts. The framework governing this theory of justice should be international law rather than national interests, history, or political calculations. This way, the theory becomes less subjective and not open to interpretation, power and interest relations.

Seeking justice should be the driving force of oppressed people. A balanced approach to peace and war is the only way to achieve justice. Non-state actors, with all their agency, are also responsible for making sure that injustice does not take place while seeking justice. For this reason, non-state actors must abide by the rules of conduct in wars in line with their right to self-determination, as defined by international law.

Go to Top
Also Read
Can the Taliban Deal with their Handicaps?