Liberation Legitimacy: How Far Does It Count?

It does not matter if a group won the country’s independence through arms or through dialogue - what matters at the end of the day is meeting people’s increasing needs. 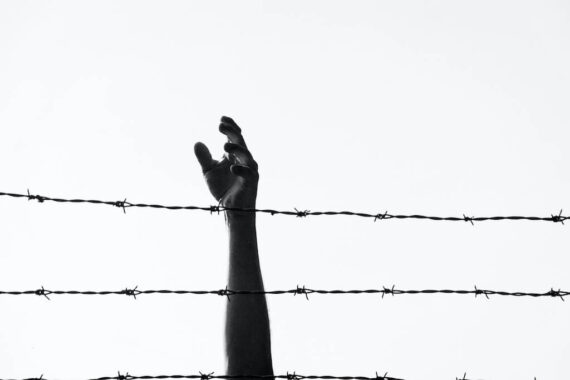 A hand reaches higher than the barbed wire in this image depicting the fight for freedom. Photo by Marcia Straub, Getty Images

Liberation legitimacy occurs when a group that is fighting a liberation war in the context of foreign domination enjoys the feeling of the support of the masses and attains international legitimacy to fight the war. This feeling of being legitimate often remains as the only force on the ground in the context of foreign domination, occupation, or colonization.

Liberation legitimacy derives its validity from the self-perception of non-state actors fighting a liberation war, the continuation of the foreign occupation, and the relevant international laws that provide that people under occupation have the right to self-determination. This argument, from the point of view of non-state actors and international law, appears to conform to the existence of occupying foreign forces occupying another nation. But the question is, what happens if these forces leave?

In some examples, non-state actors have engaged in civil wars as a result of the emergence of other forces that adopted different views on how to deal with the foreign presence on their soil. This includes Algeria, Palestine, Angola, Lebanon, Afghanistan, and Vietnam, among others. A major justification for the use of force by dominant non-state actors is the legacy of fighting foreign forces which very often provides them with a valid legitimacy. This legitimacy ends when the presence of foreign forces ceases; however, some self-described liberation groups behave as if it lasts even after the foreign forces have left.

Read: Liberation Theology and Politics: From Latin America to the Middle East

Some liberation movements (non-state actors) in many parts of the world, be it in Algeria, Zimbabwe, Mali, and Ghana, have (mis)used liberation legitimacy even after the foreign occupation ended. This has created a dilemma for these self-described liberation groups as in the transition to democracy many of them have leaned on their entitlement to rule which derives from what they view as their liberation legacy. Some non-state actors, such as the Palestine Liberation Organization (PLO) in Palestine and the National Liberation Front (NLF) in Algeria, act as if this legitimacy is stronger than electoral boxes.

Voters, who might be the same base that gave support to liberation groups during wars of independence, might vote for another group or individuals who didn’t emerge out of liberation groups. In many instances such as the NLF in Algeria, voting a liberation group out of government results in the army’s opposition to such unfavorable electoral results and its intervention which impacts the country for years to come. In other cases, the leaders of the liberation war stay in power indefinitely, claiming a liberation legitimacy and legacy.

An example of a leader who stayed in power by utilizing liberation legitimacy is Robert Mugabe of Zimbabwe, the leader of the liberation war, who stayed in power for 30 years despite becoming very ill towards the end of his life. Although Mugabe adopted reforms that defended the rights of his people to better access to education, healthcare, and land, his last years in power saw the deterioration of his country’s economy to record levels. Claiming his right to rule as a result of fighting a liberation war, he even appointed his wife as his deputy. Mugabe was forced out only after the army intervened and pressured him to resign in 2017.

Read: Why Many Liberation Movements Fail at Government

Although there are examples where liberation groups cling to power claiming their liberation legitimacy and legacy, there are other examples where liberation groups establish democratically elected governments. A well-known example is the government of South Africa, which despite accusations of corruption, still runs as a functioning democracy. It was the struggle of the African National Congress (ANC) that led South Africa to end the rule of a white minority and state apartheid.

This culminated in the election of Nelson Mandela as the first black president of the country in 1994. Today, however, the government of South Africa faces mounting challenges and a legitimacy crisis due to accusations of mismanagement and corruption.

Sinn Féin’s transition to governance has also created divisions among the Irish people with some viewing the Good Friday Agreement of 1998 as a positive step and others as a setback.

Another example where national liberation groups have succeeded in moving to governance is Sinn Féin in North Ireland, where the political group is now part of the country’s political system. The transition of Sinn Féin to governance and its acceptance of a political settlement came at a high cost as it followed a wave of violence for attaining independence from Britain. Sinn Féin’s transition to governance has also created divisions among the Irish people with some viewing the Good Friday Agreement of 1998 as a positive step and others as a setback.

The claim to liberation legitimacy creates a dilemma for liberation groups in government; they sometimes act against the will of their people although they were meant to exist to defend this very same will. Liberation groups need to establish bodies and mechanisms that can ensure a smooth transition to providing good governance after the end of liberation wars.

Once a liberation war is over, it is the electoral box that gives a government its legitimacy. Once liberation groups refrain from respecting the will of the people under the claim of enjoying an absolute liberation legacy, they lose the people’s respect.

The last phase of liberation should always be moving to good and democratic governance. Nelson Mandela, the charismatic leader of South Africa, has set a good example by running for president only once. Refusing to let go of power based on claims of liberation legacy does not sell. What sells for the ordinary people on the ground is providing them with solutions to their problems especially in a post-liberation phase, where transition to government faces many structural challenges.

It does not matter if a group won the country’s independence through arms or through dialogue – what matters at the end of the day is meeting people’s increasing needs. It is up to liberation groups to present people with leaders who can win elections. Once a group is unable to do so, by no means should it use its liberation legacy as an excuse to continue being in power in opposition to the will of the nation’s people.