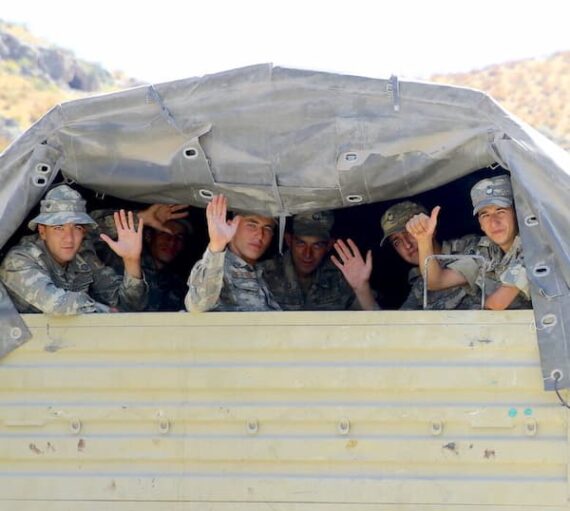 he governments of Azerbaijan and Armenia have traded accusations of responsibility over border clashes that have claimed the lives of 71 Azerbaijani and 100 Armenian soldiers at the Karabakh border area since September 12, 2022.

The death toll is the highest since the two countries reached a truce in 2020 following the renewal of a 30-year-old conflict that ended in Baku recapturing much of the territory belonging to Azerbaijan that had been occupied by Armenia. Following Turkish diplomatic and military support, a truce brokered by Russia was reached.

The United Nations Security Council (UNSC) held a meeting on September 15, 2022, to discuss the situation on the ground in Karabakh, where a small Russian peace force is present.

The Ministry of Foreign Affairs of the Russian Federation has called on all parties to the conflict to practice self-restraint. Both Azerbaijani and Russian presidents met at the Shanghai Cooperation Organization Summit held in Uzbekistan on September 15-16.

The Collective Security Treaty Organization (CSTO), a Russia-led military bloc, of which Armenia is part, along with Belarus, Kazakhstan, Kyrgyzstan, and Tajikistan, said it will not send troops to support Armenia following a meeting held on September 13 at the request of Yerevan.

Nikol Pashinyan, the prime minister of Armenia, said in a speech before his country’s parliament that 105 Armenian soldiers were killed in the clashes, noting that he sought military assistance from the CSTO. Yerevan announced a unilateral ceasefire on September 14, and Baku in return offered to hand over the bodies of 100 Armenian soldiers killed at the border.

Yury Ushakov, Russian presidential aide, called on both parties to “observe the well-known trilateral statement of the leaders of Russia, Azerbaijan and Armenia from November 2020, as well as January and November 2021.”

Turkey and the escalation

Turkish president Recep Tayyip Erdoğan reiterated Ankara’s support for Baku, noting that “the world should know that Türkiye stands by its Azerbaijani brothers and sisters,” during a speech he gave in Ankara on September 14.

“Türkiye hopes Armenia will step back from its current mistaken path to work for peace instead,” he said.

In the same context, Turkish Minister of Defense Hulusi Akar discussed the escalation in Karabakh in a phone call with his Azerbaijani counterpart Zakir Hasanov on September 14, stressing that Ankara stands by Baku and the people of Azerbaijan.

Anthony Blinken, the U.S. secretary of the state, said in a statement that “the U.S. is deeply concerned about reports of attacks along the Armenia-Azerbaijan border, including reported strikes against settlements and civilian infrastructure inside Armenia. As we have long made clear, there can be no military solution to the conflict. We urge an end to any military hostilities immediately.”

State Department spokesperson Ned Price stated, “We have called on Russia, and we do call on Russia, to use that influence and to use that leverage in a way that helps to achieve a cessation of hostilities, and more broadly, a de-escalation of those tensions.”

Armenia and Azerbaijan fought a war in 2020 over the Karabakh region, which claimed the lives of 6,000 people and ended on November 9, 2020, following Russian mediation. Baku was able to recapture much of the territory of Karabakh, which was under Armenian occupation for 30 years.