The fight against the so called "Muslim Separatism" in France reveals a lot about France's own history and view of Islam. 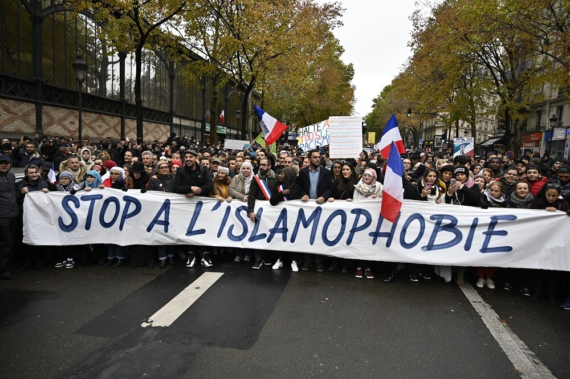 Thousands of demonstrators gather at Gare Du Nord after the call from scores of institutions, during a demonstration to protest against Islamophobia, on November 10, 2019 in Paris, France. Photo by Mustafa Yalcin, Anadolu Images

At the beginning of his speech at Mureaux titled “Fight against Separatism” on October 2, 2020, French President Emmanuel Macron said that it is necessary to understand the current problems of France with a taboo-free approach.

During his speech, which lasted about 70 minutes, he identified the problem and this taboo-free approach: “There is an Islamic separatism that endangers our society, our capacity to live together, our Republic; it is first trying to establish a hostile society parallel to the Republic, and then take it over!”

The president did not mention terror, terrorists, or a terrorist organization, and even said he distinguished these Islamic separatists from the rest of Muslims in France. So, who are the perpetrators of this “separatism?” More importantly, what is the difference between an ordinary Muslim and a separatist Muslim in the eyes of the state? How can one tell a Muslim is not a perpetrator of “separatism”?

According to the French president, the separatist Muslims “propose ideas that turn the republic’s values upside-down, disregard gender equality, and even contradict human dignity.” In France, for almost 30 years, there have been many instances of explanations by high-level officials as to what Macron means by this and who this rhetoric affects.

François Hollande, compared to his successor Sarkozy, gave the impression of a politician with a more respectful and earnest approach towards Muslims. Sarkozy stated, “If a woman with the headscarf is given the opportunity to improve herself, she will be liberated from captivity, eventually throw away the headscarf, and become ‘French’.”

Laurence Rossignol, Hollande’s Minister of Family, Children, and Women’s Rights, explained how women’s dignity is disregarded. “Once there were black people who wanted slavery in the U.S., the women with headscarves are just like them.” Manuel Valls, the former mouthy prime minister of France under François Hollande, said that religious symbols besieged the streets and that this meant a rebellion against the republic. He also assumed the role of a religious authority as the prime minister and said, “The burkini is not in the Qur’an, so it is the symbol of radical Islam.”

Last year, when the sportswear brand Decathlon marketed a sports hijab, the top representatives of the political class became hysterical! Aurore Berge, Macron’s party spokesperson, called for a boycott of the brand.

Of course, the views of the former socialist president, François Hollande and his cabinet are not exclusive to them. Statements by Macron’s ministers, by the dominant intellectual class, and the incessant comments in the media show that there is no end to the cases against gender equality and women’s dignity. Last year, when the sportswear brand Decathlon marketed a sports hijab, the top representatives of the political class became hysterical! Macron’s party spokesperson, Aurore Berge of National Assembly (La République En Marche group), called for a boycott of the brand.

“Now it is impossible for me to trust a brand that contradicts our values, neither as a woman nor as a citizen,” Berge said. While Marlène Schiappa, who served as Secretary of State for Gender Equality in the government of Prime Minister Édouard Philippe from 2017 to 2020, cried, “This sportswear is obviously a promotion of political Islam, a proof that religion controls everything.”

According to the spokesperson of the Republicans (Les Républicains), Lydia Guirous, the brand’s move was “nothing but chaperoning the submission of women.” And for some members of the French parliament, the brand was “obviously starting the sexual apartheid process.”

After a few days, the company announced, “We have been subjected to unprecedented threats and a wave of insults, our employees were insulted and physically threatened.” As a result, the company withdrew the product from the market.

The French president made other striking points such as “[i]n some municipalities, there are requests for men and women to swim at separate hours in the pools” and “some students in some schools ask for mealtimes at school cafeterias according to their religious beliefs!”

During a TV program, the Minister of the Interior Gérald Darmanin stated, “I am always shocked when I see food aisles applying religious beliefs at supermarkets!” While Macron emphasized in his lengthy speech at Les Mureaux that the government will get to the bottom of this issue, according to the Minister of Interior Darmanin “this is how communitarianism starts” and capitalism is the culprit.

While explaining the difference between “Muslims” and the “separatist Muslims”, Macron stressed that the separatists talk a lot about France’s colonialist era!

Somewhere in his speech, while explaining the difference between Muslims and the separatist Muslims, Macron stressed that the separatists talk a lot about France’s colonialist era. Clearly these separatists talk about the parallel society created by the first-class French citizens who gave a status of half citizenship to the Muslims who survived the torture and massacres in the former colonies of France.

Simple things like the beaches closed to Algerians in Algeria, or 25 Muslims staying in a barrack room whereas five French people staying in similar rooms, or not being able to get a passport! As written on the walls of the barracks, French people needed more oxygen – just like today.

Though French President Macron accepts that France has its “faults” and “responsibility” for the colonial past, he personally thinks the separatists have evil intentions, “otherwise why would they talk about this?” he wonders. “If,” he begins and explains, “their grandparents have been living in our land for many years now, children and their parents who never saw the colonialist era, these separatists entrap them.”

The formula of the French president is simple, and he expresses it whenever possible. He explained his formula last year in January in the old capital of the Republic of Cote d’Ivoire, Abidjan, by saying, “Colonialism was a big and serious mistake of the French Republic!” Implying that it is all in the past now, he made a call to all of Africa, “Let’s turn this page now. Besides, the population of the African continent is young. For example, three-fourths of the population of Cote d’Ivoire never lived in the colonial era. Likewise, I also am not from the generation of the colonial era.”

If the issue of halal food, which could be handled very simply in the school canteens, was considered an issue at the state level, then, the problem is directly the belief and religious practices of Muslims.

Therefore, it could be expected that France would confront Muslims with the strict laicism principle. And then, we could say France’s traumatic past with Catholicism does not legitimize the attack on the Muslim minority today, but that’s not the case.

Also Read
The Right to Blaspheme, the Mila Case, and Islamophobia in France