The next mass shooting in America is expected to happen in less than 13 hours. 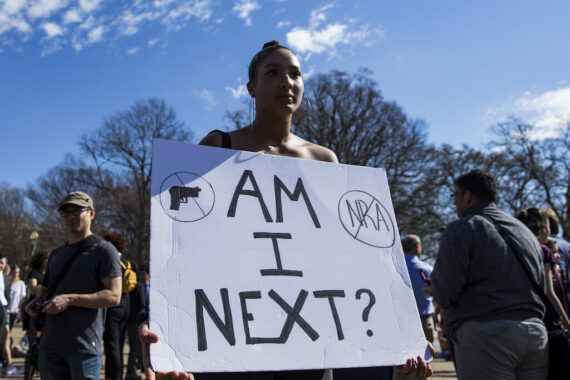 A student holds a placard as hundreds of students call for greater gun control laws as they protest outside of the White House in Washington, USA on February 21, 2018. Photo by Samuel Corum, Anadolu Images

The next mass shooting in America is expected to happen in less than 13 hours. That is what 457 incidents by August 29, 2021 translates into and it is horrifying.

Yet, as dramatic as it may seem, a graver threat to America comes from the mass shootings that are likely in the longer run. The momentum that these attacks are building, and have been building, has largely been ignored, but represents a much grimmer menace.

The underlying causes of mass shootings have become so saturated within the society that they cannot be distinctly identified anymore. Because they’re elusive, institutions and policies that perpetuate such proclivities are even harder to pinpoint and galvanize support against.

When the focus should be on building a better society for future generations, we don’t seem able to agree even on how to save lives today.

The substance of even more immediate policy gets lost, more or less, along partisan lines. Republicans, who overwhelmingly support lax gun ownership laws, tend to put the onus on mental health. Former President Trump had gone so far as to say, “Mental illness and hatred pull the trigger, not the gun.”

But consider this: the U.S. is estimated to have the largest number of firearms per person in the world. Even more remarkable is the extent to which the U.S. figure at 120.5 per 100 exceeds even the second highest country on the list, Yemen at 52.8 per 100 – a country in the midst of civil strife and war.

Read: Gun Violence in the US and Puerto Rico: This Can No Longer Continue!

Yet, even as the frequency and intensity of the shootings have been on the rise over the last few decades, people’s attitudes towards gun ownership, on average, are still changing only very slowly. According to a Pew survey, as recently as 2019, 80% of Republican voters said it was more important to protect gun owners’ rights than to rein in gun ownership.

It takes a lot of effort and at least some pretense to argue that there would have been as many killings in America if Americans had fewer guns on average. Unrestrained gun ownership is the elephant in the room.

Lagging behind on psychological well-being

Still, gun ownership is not the only explanation for mass shootings, even if most Democrats would be inclined to believe so. Mental health, which the more left-leaning voices cautiously avoid blaming on rather passionate grounds that it could stigmatize those facing mental health challenges, is nevertheless associated with violence, and America’s situation here is again concerning.

According to a survey of 11 high-income countries by the Commonwealth Fund, every fourth American is diagnosed with a psychological condition. Moreover, almost half of the respondents reported they had experienced emotional distress due to neighborhood safety concerns, or not having enough money for housing and/or food. This is an alarming statistic, considering America is the most resourceful country in the world according to overall GDP levels.

However, even with this grim picture of mental health and one of the highest rates of suicide among industrialized countries, the U.S. compares unfavorably to other high-income countries on the number of professionals working in mental health.

Thus, the problem is way bigger than the precious little legislation in some states on “background checks” for assault weapons manages to capture.

Which one is it?

In a world of complex interactions, a witch hunt for the absolute fundamental determinant of violence is as naive as it is useless. What is incontrovertible, nevertheless, is that gun ownership levels in the U.S. are not normal for a normal country – and that shrugging it off as a byproduct of a sacrosanct “gun culture” could turn out to be yet dearer in the future. Mental health issues, too, are at an alarmingly high level without the required infrastructure for support.

Both of these are problematic. Both need immediate redressal to bring them more in line with a level befitting a country with such massive resources as those of the United States.

Yet, it’s already quite late. Gun ownership may be restricted, but the guns people already have – including assault weapons – cannot be taken away. There can be investments in mental health, but it will be a challenge to pull society out of such pervasive challenges toward a better mental health state at large.

What’s worse, gun ownership and mental health could be interacting in far more complex ways than any research has been able to discern so far. In short, measures taken even today will take a long time to have any effect.

Where do the shootings originate?

Even such measures would be essentially dealing with only the somewhat superficial mechanics of the problem. The underlying causes of mass shootings cannot be identified without reconsidering the contours of social justice in American society today.

Why is it that well-being in one of the richest countries in the world has not kept pace with economic growth, even as corporations have thrived? While the common person struggles to survive, politicians are in a state of disconnect and are essentially hostages to the groups that enthroned them. Special interests determine who gets what from the pie, sprinkling peanuts of micro-choices here and there to delude the masses into an illusion of liberty, and even the lure of “Americanism.”

There is nothing American about settling for a mass shooting every day. There is no liberty in not being able to choose to live. If anything, there is an incentive for those who design the frame of our choices to conflate constructed, imaginary ideals with “identity.”

If the corporate world can make assault weapons a part of consumption culture, and go so far as to conflate arms ownership with national pride, elevating guns to becoming a definitive symbol of the American “identity,” undoing this formidable milieu is going to take a strong will and a perspicacious strategy.

Given the deep-seated polarization in American politics today, breaking the categories will take long. Reimagining justice seems, unfortunately, quite distant.

Meanwhile, a distressed, hate-filled mass shooter is planning his attack somewhere. He knows he is short on time.