Gun Violence in the US and Puerto Rico: This Can No Longer Continue!

The Gun Violence Archive reveals that a total of at least 19,223 people lost their lives due to gun violence in 2020 in the United States. 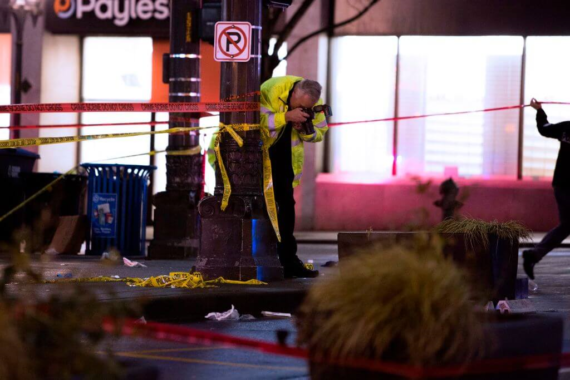 A crime scene investigator photographs the scene of a shooting that left one person dead and seven injured, including a child, in downtown Seattle, Washington on January 22, 2020. Photo by Jason Redmond, AFP via Getty Images

The gun crisis in Puerto Rico is inherently different than that taking place in the United States. People in Puerto Rico and the United States behave the same way when it comes to using guns to carry out violent acts. Yet, going deep into the matter, Puerto Rico has a higher rate than the U.S. mainland when it comes to deaths and incidents caused by firearms. The United States’ biggest problem with guns is mass shootings and the “heritage” attached to owning a gun since it’s a constitutional right – a right that was given to U.S citizens at a time where guns were not automatic.

In Puerto Rico, people don’t experience events like mass shootings at schools or white supremacists entering a building and gunning down people. Here we see day-to-day gun violence and illegal guns coming to the island in many different ways. Richard Hofstadter pointed to the uniqueness of the gun crisis within the United States “as the only modern industrial urban nation that persists in maintaining a gun culture.”

American gun culture is deeply rooted in the nationwide reality of the country, the lawful possession of guns by a large percentage of the population, and viewing guns as material objects. The vast majority of U.S. citizens are allowed to buy and keep firearms without restriction.

Lobby groups in the U.S. have campaigned for owning arms, a right granted under the Second Amendment of the U.S. Constitution, which states, “A well-regulated Militia, being necessary to the security of a free State, the right of the people to keep and bear Arms, shall not be infringed.”

VIDEO: How U.S. Gun Deaths And Mass Shootings Compare To Other Countries

Federal law sets the minimum standards for firearms regulation in the United States, which is why the people of Puerto Rico demand the US federal government to adopt stricter measures when it comes to gun ownership and possession. Individual states have their own laws, such as the kinds of weapons that are allowed to be owned or carried in public.

The U.S. has less than 5% of the world’s population, but up to half of the world’s civilian-owned guns. It also has the highest homicide-by-firearm rate among the world’s most developed nations.

Nevertheless, in Puerto Rico, on December 11, Puerto Rico’s Governor Wanda Vàzquez Garced of the New Progressive Party signed the Puerto Rico Weapons Act of 2020. The legislation overhauled the island’s gun laws in a manner that will make it easier for the island’s residents and visitors to exercise their “constitutional right” to keep and bear arms. We all know that this is not the whole truth/that is only part of the truth.

For the government, it’s more about benefitting from the gun crisis on the island. The legislation’s provisions pertain to firearms licensing procedures. Prior to the enactment of the Weapons Act, Puerto Ricans could apply for a possession license, or a carry license that was much harder to obtain.

The Weapons Act combines the two licenses into a single license, making it easier for citizens to own firearms. This single license of owning arms is a shall-issue, meaning it requires a license to carry a concealed handgun. Previously, Puerto Ricans were required to petition a court for the approval of a carry permit. The legislation also puts in place a flat $200 initial licensing fee, and a $100 renewal fee.

Puerto Rico, an unincorporated territory of the United States, has faced a wave of armed crimes for several decades.

When analyzing the statistics of violent deaths, including those carried out by firearms in various jurisdictions throughout the world, we find that Puerto Rico had a rate of 22 homicides for every 100,000 inhabitants three years ago. This represents almost a third of the rate of El Salvador (62 for each 100,000) which may look favorable, but is very high compared to countries like Costa Rica (12 for every 100,000), the Dominican Republic (11 for each 100,000), and the United States (5 for each 100,000).

In Puerto Rico, firearms are used in 90% of murders, a percentage that is double the world’s average for the use of weapons in homicides (41.2%). Interestingly, only 12% of the population in Puerto Rico are in illegal possession of firearms, while the number of guns that are owned under license are 422,000.

According to data from the Puerto Rico Police Bureau, the average number of murders in Puerto Rico between 2010 and 2018 was 811. A Vice News report stated that in 2011, Puerto Rico’s homicide rate increased by more than 1,100 murders in one year. In 2012, Puerto Rico topped the world in deaths caused by firearms beating countries like Sierra Leone, Guatemala, and even Honduras.

Firearms were used in approximately 74% of homicides in 2018. The other 3.6% of firearm deaths are unintentional, undetermined, due to law enforcement intervention, or due to public mass shootings (0.2% of the total firearm deaths). There are approximately 115,000 non-fatal firearm injuries in the U.S. each year. Thirty-one percent of households in the U.S. have firearms, and 22% of American adults personally own one or more firearms.

Read: Can A Third Political Party Bring Change in US Foreign Policy?

Also Read
The American Injustice Industry: Why Shutting Down Guantánamo is Not Enough