Military and Economic Measures tabled against the KRG

With the rights arising from the 1926 Treaty of Ankara, Turkey is expected to exercise pressure on the Iraqi central government and the KRG. Minimizing the activities of the Turkish Consulate General in Erbil and reducing the diplomatic relations with the KRG to minimum can also be expected. 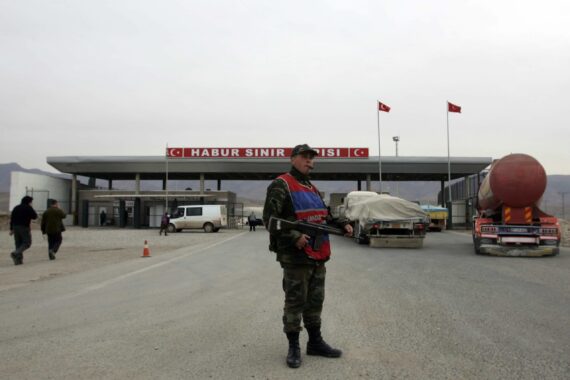 The U.S. invasion of Iraq in 2003 and the developments in its aftermath led Turkey to develop different policies towards Baghdad and Erbil. This change was caused by the drafted constitution that was prepared by the Coalition Provisional Authority (CPA) and transferred to the Iraqi Interim Government Council following the fall of Saddam Hussein. The draft, which was approved by the Council on March 8, 2004, formed the basis of the Iraqi Constitution and paved the way for the country’s federal system composed of two parliaments. In the light of the provisional Constitution, the Iraqi federal legislative elections and the Kurdish regional elections were simultaneously held on January 30, 2005 while the Kurdistan Regional Government (KRG) gained de facto autonomy. With the January 30 elections, Jalal Talabani, one of the two prominent Kurdish figures in northern Iraq, was elected the President of Iraq, while his opponent Masoud Barzani consolidated his political position by being elected the KRG President. The Iraqi Constitution was ratified on October 15, 2005 with a referendum and recognized the KRG as a regional actor. On October 24, 2005, Masoud Barzani was welcomed as the “KRG President” by then U.S. President George W. Bush at the White House one day before the official results of the constitutional polls were announced.

Although Iraq’s Constitution of 2005 puts emphasis on an “Iraqi” identity, it was built upon a sociology based on ethnicity and sect, which impeded the Constitution to offer an integrative approach. As viewed through the lens of the KRG, the only explanation of rationalizing this volatile coexistence presented by a non-integrative constitution might be a bond of voluntariness that could be abused when the time comes. This is the reason why the Iraqi Constitution gained around 80 percent support from KRG-controlled areas during the polls on October 15, 2005. The notion of region expressed in the fifth section of the Iraqi Constitution is the greatest problem ahead of a unitary Iraq, while also constituting a national security threat to Turkey as well. For Turkey, the two main controversial aspects in the new Iraqi Constitution are the future of the KRG and the status of Kirkuk province.

The Iraqi Kurds belonging to the Barzani tribe have displayed pragmatic responses to all kinds of local, regional and global developments as of 1918 following the dissolution of the Ottoman Empire. As the opportunist and occasionally violent approaches of the group posed military and political threats on a local level to the answering authorities in terms of autonomy and independence, they aimed to increase the capacity of their activities in the region with the reactions they showed to various developments.

These developments can be listed as follows:

The 2003 invasion and its aftermath led pro-Kurdish politics, which flourished in 1945 in the domination of the Kurdistan Democratic Party (KDP), to evolve into a regional threat. Meanwhile, the Daesh incursion of Mosul in 2014 laid the conditions which provided the KRG with an opportunity to move from autonomy to independence. However, the claims of independence were not prevalent in the entire KRG, as they were only revolving around the KDP and its leader Masoud Barzani. Independence assertions within the Goran movement and the Patriotic Union of Kurdistan (PUK) have not been as strong as in the KDP. KDP circles were concerned when Daesh was defeated by the Iraqi army and the Iran-backed People’s Mobilization Forces (al-Hashd al-Sha’abi) in Mosul in 2017 as the territories were taken back by the central government of Iraq. The KDP rationalized its independence argument through the central authority’s re-establishment in areas near the KRG borders, the disturbance caused by the increasing influence of Iran in the region and the good relations developed with Turkey. Therefore, the planned independence referendum became increasingly important in terms of consolidating Kurdish presence in the disputed territories and in terms of institutionalizing Masoud Barzani’s political power.

What should Turkey’s diplomatic, economic and military measures be?

Since the First World War, Turkey has not gained any benefit from the conflicts in the Middle East, particularly in Iraq and Syria. Contrarily, the country exerted utmost efforts to resolve the problems through diplomatic means without being a party to the conflicts. Turkey generally has only taken active roles in such conflicts when the course of events directly threatened the country’s national security. Turkey’s preventive military operations against the outlawed PKK in northern Iraq, Daesh and People’s Protection Units (YPG) in northern Syria were launched as part of this strategy. It is clear that the KRG’s independence vote poses a national security threat to Turkey. When Turkey’s relations with the KRG and the central government of Iraq are considered, it can be expected that the country’s response to a possible independence will entail a list of measures in diplomatic, economic and military terms.

At the Turkish National Security Council (MGK) meeting held on September 22, a number of recommendations were given to the government to implement a list of sanctions in line with regional relations and national security threats. With the rights arising from the 1926 Treaty of Ankara, Turkey is expected to exercise pressure on the Iraqi central government and the KRG. Minimizing the activities of the Turkish Consulate General in Erbil and reducing the diplomatic relations with the KRG to minimum can also be expected. In addition, Turkey might exert pressure on the central government to conduct legislative regulations and take physical measures that would obviate the KRG’s assertive rights in the disputed territories, including Kirkuk.

The economic sanctions Turkey will possibly impose on the KRG include suspending activities at the Habur border gate, stopping shipping at the Kirkuk-Ceyhan Oil Pipeline, restricting Turkey-based investments in the region, limiting the commercial activities between the KRG and Turkey, suspending the energy projects, and withdrawing grants and credit support given to the region.

The military measures Turkey will take started to become evident before the MGK meeting. The Turkish Armed Forces (TSK) could turn the military drill it kicked off and expanded in Silopi into an operational assignment depending on a possible conflict in the KRG. Within this scope, the military operation the TSK has launched in coordination with the Iraqi army in Sinjar, located near the Syria-Iraq border, will enable the TSK to engage with the PKK in the region while also enabling the Iraqi army to handle KDP units. This would help to divert the KDP Peshmerga away from disputed territories in the north and east of Mosul. The TSK can be expected to have a direct engagement with the PKK and indirect interventions on the KRG by means of large-scale air raids and special operations it will launch on the PKK camps located in northern Iraq.

Also, Turkish combat troops might be deployed to Kirkuk in the framework of a protocol that is to be held with the central government of Iraq in order to ensure the security of the Turkmens in the province. Extensive special air operations are estimated to be conducted in coordination with Iran against the PKK camps in Khakurk and Qandil regions, which are located within the domain of the KRG. There is also a possibility that Iran could launch a counter-operation to the KDP units deployed near the Iran-Iraq border.

None of Turkey’s military options suggest a direct intervention in KRG units. The engagement conditions will arise against the KRG Peshmerga forces only in case of a direct attack against the TSK forces. Military clashes are most likely to be seen among the Iraqi Army and the KDP Peshmerga, al-Hashd al-Sha’abi and the KDP, Iran and the KDP, and between the PKK and TSK, while additional clashes might occur between the KDP and the PUK, the KDP and the Iraqi Turkmen Front, the PKK and al-Hashd al-Sha’abi, and the PKK and the Iraqi army.

Who will benefit from the referendum?

Turkey does not wish to jeopardize its amicable relations with the KDP due to the pragmatic approaches of Barzani and his proponents as such a situation is likely to reduce Turkey’s influence in the KRG. However, it is also seen that the KRG’s independence process overtly threatens Turkey’s national security due to the risks it entails – even the debates on the referendum caused quite a stir and led Turkey to revise its current strategy towards the KRG. The process kicked off with the KRG’s independence venture, presenting two main arguments for Turkey to boost its efficiency in Iraq: new and manageable regional alliances and direct military engagement with the non-state actors.

Even triple alliances might be built in this respect while Turkey-Iraq and Turkey-Iran alliances are anticipated. This reflects the fact that the current situation in the KRG can be regarded as a common threat. Turkey’s arguments concerning non-state actors take shape in consideration of the PKK, leading the Iraqi central government to take direct measures against this terrorist organization. In this way, Iran will see that its own security would also be threatened unless it adopts any direct stance against the PKK.

It must be clarified that the PKK will gain the upper hand if the alliances are not well-managed, and this would certainly neither favor the KRG nor the other regional countries. The most important result of this process is probably the signs indicating that the status of Kirkuk will be determined soon. Within this scope, Turkey’s military, diplomatic, economic and cultural presence in the region might provide a chance for Turkey to meet the expectations of the Turkmens in the region while it will also deepen Turkey’s domain in the crisis points of Iraq.