Until Donald Trump announced the US recognition of Moroccan sovereignty over Western Sahara in exchange for the restoration of diplomatic relations between Morocco and Israel, these two issues were never discussed together. 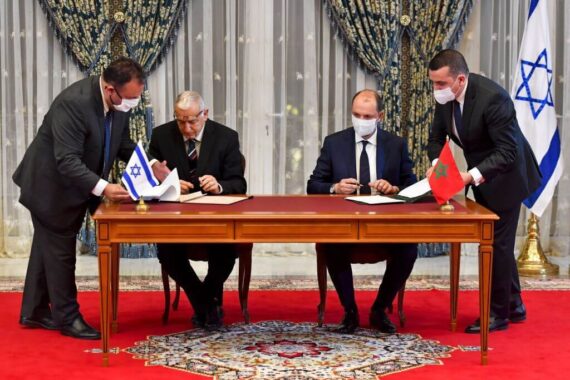 Israel and Morocco sign an agreement at the Royal Palace in Rabat on December 22, 2020, on the first Israel-Morocco direct commercial flight, marking the latest US-brokered diplomatic normalisation deal between the Jewish state and an Arab country. Photo by Fadel Senna, AFP via Getty Images

Morocco has always had two “sacred” causes. The first and the oldest cause is Palestine, which had been there since the declaration of the State of Israel in 1948, eight years before the Sherifian Empire regained its independence from France and Spain. The second “sacred” cause dates to 1975, when, Spain handed over the keys of Western Sahara to Morocco and Mauritania following the Green March and the Madrid tripartite agreements.

This was a poisoned gift by Spain that triggered a war between Morocco and the Saharawi independence fighters of the Polisario Front. The withdrawal of Mauritania from its zone, that is the southern half of Western Sahara, in 1979, pushed King Hassan II to occupy the zone militarily in order to prevent the Polisario from using it for their own benefit.

The Moroccans have always held the causes of Palestine and the Western Sahara close to their hearts. With the exception of a few small Berber groups, all Moroccan political parties have continuously declared themselves pro-Palestinian.

For the Western Sahara conflict, only one political formation of Marxist affiliation, Annahj Addimocrati (The Democratic Way), is neutral and calls for the holding of a referendum on self-determination as accepted by Hassan II and adopted by the eighteenth summit of the Organization of African Unity (OAU), the forerunner of the African Union (AU), in 1981.

The position of the Democratic Way is rare in a country where the concept of “national consensus” has been imposed, according to which all Moroccans are obligatorily in favor of the Moroccanness of the Sahara, and those who deviate from considering Western Sahara as Moroccan, as well as those who call for the holding of a referendum, although granted by Hassan II, are considered “traitors.”

A group of people gather during a demonstration in support of the "Great March of Return", on May 13, 2018 outside the Parliament building in Rabat, Morocco. Photo by Jalal Morchidi, Anadolu Images

Until President Trump announced the U.S. recognition of Moroccan sovereignty over Western Sahara in exchange for the restoration of diplomatic relations between Morocco and Israel, these two issues were never discussed together. Neither of these two causes was more important or more sacred than the other.

And it was unthinkable that one could ever be bartered for the other. However, this is precisely what just happened. By agreeing to re-engage with the Israeli state, the King of Morocco Mohamed VI has broken, even if he defends himself against it, this consensus on Palestine by making a major geostrategic deal.

Hence, a large portion of the Moroccan population didn’t understand the Israel move. While Moroccans are satisfied that the current U.S. administration’s recognition of their country’s sovereignty over Western Sahara, they are mortified by the king’s decision to restore diplomatic relations with Israel, which is considered a colonial state.

In a country like Morocco, which has an allegedly constitutional monarchy, the elected representatives in the House of Representatives (the lower house), despite knowing the feelings of their electorate base, didn’t express their voice, at least symbolically, revealing their dissatisfaction with the move.

However, nothing happened in the country, where public opinion does not count and where virtually all political parties have long been tamed. Only three parties have declared opinions contrary to the royal decision.

Nothing happened in the country, where public opinion does not count and where virtually all political parties have long been tamed.

The Federation of the Democratic Left (FGD), with two deputies in the House of Representatives that protested, but softly; and two other movements without parliamentary representation, who are still considered as the real opposition parties in Morocco: the Marxists of the Democratic Way, and the Islamists of the powerful association Al Adl Wal Ihsane (Justice and Spirituality). The latter used the same word to say no – “treason.”

As for the other Islamists, the Party for Justice and Development (PJD), whose secretary general, Saaddine El Otmani, is the head of the Moroccan government, it expressed its reaction, which turned into a drama.

The PJD, the strongest bloc in the House of Representatives with 125 deputies out of 395, has built part of its credibility among the conservative Moroccan masses based on its intransigence in the Israeli-Palestinian conflict.

When he was not yet the head of government, Dr. Saaddine El Otmani wrote an article entitled “Normalization Is a Civilizational Genocide.”

And above all, last August, El Otmani had trumpeted loudly before a meeting for the youth of his party that “Morocco, the king, the government, and the people, are resolutely hostile towards any normalization with the Zionist entity.”

A boy holds a scarf reading "Sahara will win." Sahrawi people of Toulouse gathered against the recognition by Israel of the sovereignty of the Morocco Kingdom on the Western Sahara and its inhabitants, the Sahrawis in exchange of a normalization of relations between Israel and Morocco. December 19, 2020. Photo by Alain Pitton, Nur Photo via Getty Images

The fact that El Otmani was forced by the Royal Palace to sign, in front of television cameras on Tuesday December 22, 2020, the tripartite agreements with Jared Kushner and a high representative of the “Zionist entity,” Meir Ben-Shabbat, a close adviser to the Israeli prime minister, was felt by him and his electoral base as a strong slap in the face.

On Wednesday, December 23, 2020, Abdelillah Benkiran, the predecessor of El Otmani as the head of the PJD and the government, stated that “the PJD could not oppose the decisions taken by the king” because it is part of the state. This disturbed the party’s base even more.

The public humiliation inflicted on El Otmani was, however, the price that had to be paid for accepting the meagre power granted by the Royal Palace. What is even more dramatic is that PJD ministers cannot even resign to escape the general opprobrium. In Morocco, the ministers, let alone the prime minister, do not resign. They are dismissed or resign at the request of the king.

Read: Why Has Morocco Been Witnessing Protests Since 2011?

Morocco, as recognized in the West, is a “moderate” Arab and Muslim country. However, if it is really moderate, it is only so in its relations with the European Union and the United States of America.

As for everything else, the Moroccan monarchy is a genuine autocracy. The King of Morocco reigns, governs, is the supreme chief, and the chief of staff of the Royal Armed Forces (FAR), and has the country’s greatest fortune. To support the legitimacy of his dynasty, he also proclaims himself as the “commander of the believers” and claims to be directly descended from the Prophet Muhammad.

If we add to these powers, both temporal and religious, the fact that the sovereign directly controls several “ministries of sovereignty,” such as the foreign affairs and the interior, and that all the secret services are under his control, it is easy to understand why Moroccans and their representatives in parliament and government, are unlikely to do much to reverse the royal decision on normalization with Israel.

In the end, the “sacred” causes in Morocco are neither Palestine nor the Western Sahara. The first sacred cause is the survival of the Alawite dynasty. By abandoning Palestine, the King of Morocco, who is also the chairman of the Al-Quds Committee, consolidates the Moroccan presence in Western Sahara.

A Morocco without the Sahara, following billions of dollars in investment for the development of this arid region, serving as a manna, could simply mean a Morocco without a monarchy, some believe.

This is true and false at the same time. If one day, for one reason or another, the survival of the monarchy is to depend on the abandonment of Western Sahara, the king would not hesitate a single second to get rid of it, probably using similar fabricated arguments as those used today. Given the king’s stronghold on the state’s repressive apparatus, Moroccans will not object. They will let go of Western Sahara, as they are doing today of Palestine.