Defining Islamophobia is never the problem, genuine change usually is. 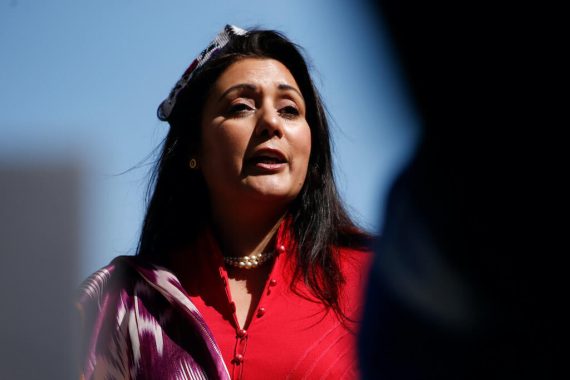 Nusrat Ghani is a Tory MP and a former British minister. She made claims that she was sacked from the cabinet in 2019 because some of the ministers were not comfortable with the presence of a Muslim minister. Photo by David Cliff. Anadolu Images.

In a critical time for Boris Johnson, Nusrat Ghani’s allegations have roiled the Conservative Party. The prime minister is awaiting the outcome of a pivotal inquiry into lockdown-flouting parties in Downing Street that took place during a period when government-backed public health restrictions prohibited most social gatherings.

In an interview with the Sunday Times, Nusrat Ghani said that when she was fired as transport minister during a reshuffle in 2020, she was informed that “Muslimness” had been mentioned as a concern at a Downing Street meeting.

“At the post-reshuffle meeting with the whips, I asked what the thinking was behind the decision to fire me…that my ‘Muslim woman minister’ status was making colleagues uncomfortable and that there were concerns ‘that I wasn’t loyal to the party as I didn’t do enough to defend the party against Islamophobia allegations.”

The accusations made by Ghani have been previously echoed by former Tory peer Baroness Sayeeda Warsi, the country’s first female Muslim cabinet minister and a persistent campaigner against Islamophobia. When she learned that Javid had been named chancellor, she stated in a tweet “It’s a shame… that it’s taken four years and a leadership contest to finally drag my colleagues kicking and screaming to address this issue.”

To be an Anti-Muslim bigot is to be rewarded and elevated to a party post but to speak out against it is to be shunned and politically exiled.

There has been criticism from the wider British Muslim community on Ghani’s role as a Conservative MP in normalizing anti-Muslim bigotry through government initiatives such as Prevent. Ghani’s definition of Islamophobia is markedly different from the standard definition, which is as follows: “Intense dislike or fear of Islam, especially as a political force; hostility or prejudice towards Muslims.”

Read: Account of Time at Guantanamo Bay: An Interview with Moazzam Begg

CAGE (the independent UK based non-profit advocacy organization dedicated to empowering communities affected by the War on Terror) highlights the concern that the British Muslim community face, and in a recent published report on Nusrat Ghani’s political platform, it states: “Almost a year ago to the day of her expose, she wrote this piece for the right-wing think tank Policy Exchange.” Her piece states “Prevent matters”, and she writes… It has done invaluable work in steering vulnerable people away from violence and reducing the security threat we face.”

“To begin with, the fact that she is ok with being published by Policy Exchange– of which she is a Senior Fellow – is in itself a problem, as the think tank regularly spews racist and Islamophobic content,” CAGE added.

Ghani seeks to push the limits of who constitutes a danger to the UK in the same Policy Exchange piece by presenting harmful caricatures of Muslims. The new ‘dangerous type,’ she claims, is the one who wears a suit and preaches about human rights/social justice.

Read: How Islamophobia Is Leading to a Teacher Shortage in Belgium

“Thus, if the archetypal radicalizer in the first decade after 9/11 was the almost pantomime figure of Abu Hamza with his eye-patch, hook hands and wild rhetoric; his counterpart in the last ten years was likely to be smartly dressed, soft-spoken and to mouth platitudes about social justice and human rights,” she continued as saying.

Prevent has faced criticism not only from civil organizations but international bodies including the UN.

In a report on anti-Muslim hate and discrimination by UN Special Rapporteur, Ahmed Shaheed, on Freedom of Religion or Belief submitted, it stated the key issues form the Prevent Strategy:

The language used by media outlets and politicians, notably during the “war on terror,” has contributed to the normalization of this bigotry. As with other types of discrimination, it is critical to hear the victims’ voices loudly.

Despite mounting worries from the British Muslim community over escalating Anti-Muslim prejudice, the conservative party has failed to settle on a definition. Islamophobia, as defined by the All-Party Parliamentary Group on British Muslims, is “rooted in racism and is a type of racism that targets expressions of Muslimness or perceived Muslimness.”

The Labour Party, Liberal Democrats, Plaid Cymru, and the Mayor of London have all endorsed this term, but the Conservative Party has rejected it. The Tory government’s refusal to adopt the definition of Islamophobia despite the support of the definition by cross party parliamentarians is a reflection of the party’s stance towards Muslims and Islam.

A YouGov poll conducted on behalf of Hope Not Hate (an non-partisan organization tackling racism and fascism) show Conservative members showing worrying beliefs in Islamophobic myths, don’t want a Muslim to be Prime Minister, and overwhelmingly reject even the very idea that the Conservative Party has a problem with this issue.” 67% believe  “there are areas in Britain that operate under Sharia law,” as opposed to just 18% who oppose this. 39% of members believe that “Islamist terrorists reflect a widespread hostility to Britain amongst the Muslim community”.

Although the Conservatives are in power and have the responsibility of bringing this problem to the forefront, Islamophobia is not only a Conservative issue; the Labour Party is not exempt.

Read: War on Elected Muslim Women in the US: Does Institutional Islamophobia Exist?

Regardless of how strongly one may disagree with Nusrat Ghani, justice requires that we contextualize this moment within the larger framework of Islamophobia that Muslims suffer. In the end, when we tolerate one person’s persecution, we all lose. While we are not compelled to demonstrate sympathy or solidarity with one person, we must evaluate all angles in the injustice of Anti-Muslim bigotry, Anti- Muslim hatred, Islamophobia (which all mean the same thing).

Changing a word’s spelling, but the intent remains the same, defining the issue is never the problem, genuine change usually is.

VIDEO: ‘I Am Mohammed Saleem’: Campaign urges the UK ‘to define Islamophobia’