The NYC Subway shooting comes during heightening crime in New York such as mass shootings and transit crime occurrences. 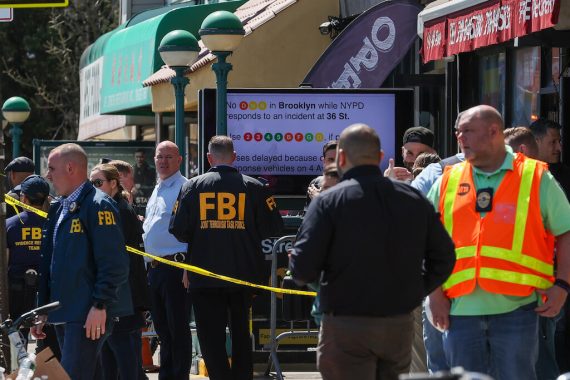 At least ten people were shot in the Brooklyn subway on Tuesday, April 13 in the morning rush hour, and a total of at least 20 people were injured in the chaos. The shooter opened fire after setting off a smoke grenade in the subway car while the train was still moving from 25th Street to 36th Street station.

Investigators believe that the shooter’s gun jammed preventing him from firing further. The case is currently not suspected to be an act of terrorism but a lone wolf attack; however, the possibility has not been ruled out. Initial worries of an explosion or a bomb were rebutted as the police stated there were no explosives found.

Videos and photos showed people rushing out of a train to 36th Street subway station platform in panic, the platform covered in smoke with bloody passengers lying on the ground.

The suspect, who fled, was identified as dressed similarly to a Metropolitan Transportation Authority (MTA) worker, wearing a hooded sweatshirt with an orange construction vest and a gas mask. The U.S. Department of Justice and the FBI are among federal organizations that are working with the New York Police Department (NYPD) to apprehend the shooter.

It was reported that the cameras at three subway stations investigated had malfunctioned but had not been tampered with. Investigators recovered the nine mm gun the shooter used to carry out the attack, detonated and undetonated smoke grenades, extended magazines, a hatchet, a garbage bag, gasoline, a rolling cart, and the key to a van parked near the subway station where the suspect is thought to have entered.

Read: Mass Shootings in America Are Now Programmed into the System

A credit card linked to a “Frank R. James” was used to rent the van, however, it is yet to be confirmed if he is the shooter. Some videos of James on social media show him criticizing racism and gun violence in the U.S., one saying, “This nation was born in violence, kept alive by violence… and is going to die a violent death.”

In another video on April 11, he talked about the need to stomp, kick, or torture people out of their comfort zone to deal with gun violence. “It’s not going to get better until we make it better,” he said. He also criticized mayor Eric Adam, particularly his plans to deal with homelessness and safety in the subway system and rising gun violence.

Major crime in New York City on a rising trend

The shooting comes during heightening crime in New York such as mass shootings and transit crime occurrences including an incident where a woman was pushed to death in front of a subway train by a stranger in January. The MTA had vocalized the decreasing sense of safety felt by passengers and that it led to decreased usage of the subway system.

The city’s new Democrat mayor Eric Adams, a former police officer who took office in January, had pledged to increase security measures in the subway in February by sending more police patrols and taking measures to prevent the homeless from sleeping on trains or ride the same lines all night.

At least six people were stabbed in the New York City subway in the same month. Following the latest shooting, Adams announced that the city will double the number of police officers in the subway.

Adams had focused his promises on tackling crime and gun violence. He introduced his “Blueprint to End Gun Violence” in January and took measures such as new anti-gun police units and stricter enforcement of low-level criminal offenses.

Read: Gun Violence in the US and Puerto Rico: This Can No Longer Continue!

Gun violence and policing have been an ongoing area of debate in New York City. Gun violence in the city shows an increase compared to 2019, with people emerging out of lockdown. Major crimes in New York have experienced an uptick of nearly 60% compared to last year.

The indiscriminate nature of Tuesday’s attack makes it stand out. A similar attack was prevented in 2017 when an attacker partially detonated a pipe bomb at a Port Authority transit hub adjoining a subway station to a bus terminal at rush hour.

President Joe Biden remarked on the attack briefly while speaking about energy prices at a bioprocessing plant in Iowa. He said that the first lady and he were praying for the victims of the attack, thanked the civilians who performed first aid before responders arrived to the shooting scene, and stated that he had been in touch with Mayor Adams and the NYPD.

Mayor Adams condemned the attack in an interview with CNN and called it a “senseless act of violence” while praising transit workers for their conduct during the attack. New York politicians and lawmakers also stated that they were closely monitoring the situation.

New York Governor Kathy Hochul addressed the shooting in a press conference saying, “No more mass shootings.” She emphasized that “it has to end now” and stressed that this was true for other forms of violence as well. She pledged to commit the resources of the city to fight the surge of crime.

Gun control debate once again sparked in the U.S.

Adams called for a “national response” for gun control in a CNN interview. Other Democrat politicians touched upon the need for gun control, Congresswoman Nydia Velázquez among them. Velázquez wrote that she was monitoring the situation, underlined the diverse immigrant community of Sunset Park where the attack took place, and voiced the need to push for stricter gun control laws in a Twitter thread.

Congressman Jamaal Bowman shared an interview about guns and underlying mental health challenges that lead to gun violence. On Monday, a day before the subway shooting, Biden had announced a new gun control measure on “ghost guns,” while the president is increasingly under pressure to address the country’s gun violence crisis.

In light of the New York City subway shooting, Canada’s Toronto mayor John Tory announced police and transit staff would be increasing patrols in their transit system, which has been experiencing cases of assault and crime recently.

Also Read
Protests Continue to Set Fire to Iran: A Review of What Is Happening