It’s time for the United States to realize that scapegoating and pressurizing Pakistan will not work at all in its favor. 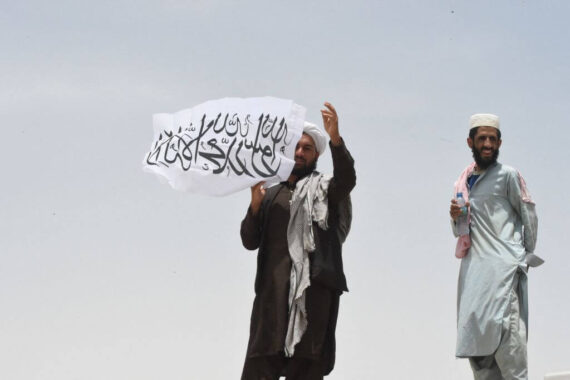 A man standing on Afghanistan's side of the border holds a Taliban flag as people walk towards a border crossing point in Pakistan's border town of Chaman on July 17, 2021. Photo by Banaras Khan, AFP via Getty Images

In the midst of the sudden political changes in Afghanistan, the disastrous withdrawal of the U.S. forces, the rapid Taliban takeover, and the narrow escape of the American-installed Afghan government, Pakistan sees itself once again trying to carefully handle the mess left by the Americans on its western border. International pressure is mounting, time is short, the internal situation of Afghanistan is fragile, and Pakistan is once again at crossroads to tackle the American leftovers.

“So, we then left Pakistan. We said okay, fine, you deal with the Stingers that we left all over your country. You deal with the mines that are along the border. And, by the way, we don’t want to have anything to do with you, in fact we’re sanctioning you. So, we stopped dealing with the Pakistani military and with ISI and we now are making up for a lot of lost time.”

These were the words uttered by then U.S. secretary of state Hillary Clinton, in the congressional hearings of April 2009, on the Obama administration’s foreign policy. She categorically highlighted that the U.S. had a share in plaguing Pakistan. She criticized the role of the U.S. in the post-Soviet scenario for leaving Afghanistan prematurely and never looking back. Importantly, the U.S. not only left the mess in Afghanistan for Pakistan, but to add salt to injury, Pakistan was sanctioned by the United States.

Today’s Pakistan once again is being blamed by the U.S. for American failures in the region. The Pakistani military and intelligence are being targeted by the West. The U.S., as always, is trying to look for a scapegoat in Pakistan. The Biden administration is not only criticizing Pakistan’s role in Afghanistan but U.S. senators have introduced a bill seeking to probe its alleged role in the Taliban’s takeover in Afghanistan.

Today’s Pakistan once again is being blamed by the U.S. for American failures in the region.

One wonders if the U.S. will ever learn from its past mistakes. Will it ever put a full stop to its hegemonic stance towards the countries that do not accept its influence while designing their foreign policy?

It’s time for the U.S. to realize that scapegoating and pressurizing Pakistan will not work at all in its favor. It will neither help Pakistan nor will it bring any good to the people of Afghanistan. It is not the time for diplomatic confrontation.  Rather, it’s time for seeking long-lasting resolutions by extending a helping hand to the ultimate shareholders of Afghanistan, the Taliban. As highlighted by Pakistani Premier Imran Khan in his recent address to the United Nations General Assembly, the world must come forward to help Afghanistan before it turns into a humanitarian crisis.

If the U.S. is genuinely concerned about the well-being of the people of Afghanistan, then it must shun the idea of enjoying unipolar superpower stature in the world. The U.S. needs to turn itself into a cooperative state that believes in mutual benefits based on bilateral relations, rather than acting as an agitating and aggressive state towards other nations.

The Taliban, viewed as unacceptable by the U.S. for whatever reasons, are the same Taliban who the Americans sat and negotiated peace with. Another important fact is that the U.S. and the Taliban were working in an unannounced alliance against ISIS-Khorasan. In the past, the U.S. hailed the Taliban’s fight against the terrorism of ISIS-K in the Nangarhar and Kunar Provinces of Afghanistan.

Zalmay Khalilzad, while representing the U.S. in the Afghan Peace Process, in a tweet, highlighted the fact that the U.S. and the Taliban were allying against terrorism. Importantly, if the U.S. is serious about the restoration of peace in Afghanistan, it must understand that not helping the Taliban will weaken their strength in fighting against the menace of ISIS-K. Indeed, if the Taliban are not helped and assisted now, they will lose the will to fight against terrorism on behalf of the world.

Pakistan has been playing its role positively in the peace process and the post-U.S. withdrawal scenario. It is to be noted that Pakistan was not the only facilitator of the Afghan Peace Deal. Qatar, China, Iran, and Russia played their role too. Indeed, Pakistan has always ultimately desired a favorable peace in Afghanistan. Interestingly, for the past 18 years, time and again, Pakistan has openly shown its concerns over the unholy Indian presence in Afghanistan.

Sadly, the Americans did not pay any heed to Pakistan’s concerns and Pakistan had to fight against terrorism on its own. Pakistan paid an enormous cost in a war on terror that initially had nothing to do with Pakistan. Nearly 80,000 people lost their lives, with almost the same number losing limbs, and more than $200 billion was lost owing to the fragility of the western front.

One might question how is India to be blamed for terrorism in Pakistan for the last 18 years? Well, interestingly enough, the current national security advisor to the Indian premier, Ajit Doval, while delivering a lecture at SASTRA University in 2014, highlighted the “defensive offense” doctrine that India followed to engage with Pakistan. The doctrine revolves around Indian tactics to engage with Pakistan on two fronts. Doval boasted about how India exploited Pakistan’s fault lines to invest in proxies against Pakistan from its western front.

Pakistan continued showing its concerns related to India about issues such as India financing and facilitating terrorism in the country through supporting the Tehreek-e-Taliban Pakistan (TTP) and the Balochistan Liberation Army (BLA). Pakistan captured an in-service commander of the Indian Navy, Kulbhushan Jhadev, from Balochistan. Hindu by faith, commander Jhadev held a passport with the Muslim name “Hussein Mubarak Patel” and clandestinely entered Pakistan via the Pakistani-Iranian border. The case is still sub judice in the International Court of Justice (ICJ).

VIDEO: Pakistani FM: Was Pakistan a safe haven for the Taliban? | Talk to Al Jazeera

India believes that Pakistan’s military has always focused on its eastern front with India. To engage Pakistan through an Afghanistan ruled by an anti-Pakistan regime was the most suitable solution for India as it would force Pakistan to split its military’s strategic focus. As a nation, Pakistan fought valiantly and tirelessly against the Indian “defensive offense.”

Currently, Pakistan’s supreme focus is on the sustainability of the Taliban setup in Kabul knowing that the Taliban, time and again, have stated that they will never allow their land to be used against any of their immediate neighbors. Pakistan not only wants sustainable peace in Afghanistan, but to ensure that Afghanistan gains momentum economically. It is an uncontested fact that Afghanistan will be self-reliant in securing itself under the rule of the Taliban, but whether they can ensure the country’s economic security is debatable.

Linking the China Pakistan Economic Corridor (CPEC) to Afghanistan and eventually to the Central Asian Republics (CARs) from Pakistan is the only viable solution to the clouds hanging over economic security in Afghanistan. Only an economically active and self-reliant Afghanistan under the Taliban can ensure regional peace.

Raja Faisal is an Islamabad-based journalist and analyst. He is currently working with PTV World as a program host on geopolitics. He is also the director of Communications at Center of Pakistan and International Relations (COPAIR).