Can you imagine what would happen if in a country somewhere in the world civilians or soldiers were trained to shoot at figures with the Jewish kippah? 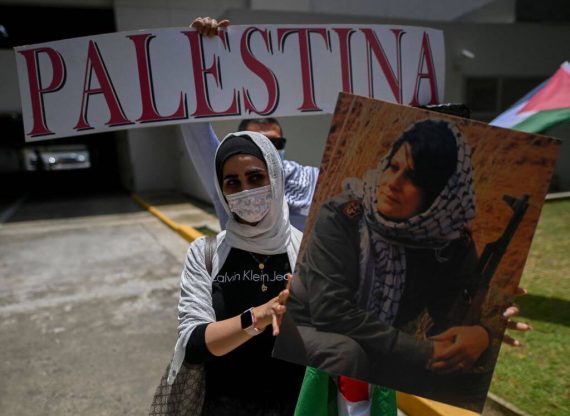 Members of the Palestinian community in Panama take part in a protest outside the Israeli Embassy against Israel's military operations in Gaza. Panama City, May 20, 2021 Photo by Luis Acosta, AFP via Getty Images

The T-shirt promoted by the Israeli military with an image of a pregnant Arab woman under the gaze of an Israeli sniper and with the slogan “ONE SHOT TWO KILLS” can still be found easily on the web, and remains fresh in the minds of many.

Recently, the world was shocked to see yet another photo where Panamanian policemen, in a joint exercise with Israeli trainers, pointed and fired their bullets at a target of a figure – it is not clear if it is a man or a woman –  wearing the traditional Palestinian keffiyeh.

The aberrant image was captured in what the Panamanian police called a “part of a training course with military instructors from the Israeli embassy.” A few hours later, the police institution of the Central American country issued a brief statement in which it apologized, clarifying that its values ​​are not represented in the leaked images.

The apology was issued in large part thanks to pressure from the Panamanian Committee of Solidarity with Palestine and various personalities of Arab origin.

Panama is a country that was born in 1903 when it separated from Colombia, largely thanks to U.S. imperialist ambitions. Today, the country has a population of just over 4 million, and is home to both Jewish and Arab communities which are among the most influential and powerful in the world.

Despite the fact that the country’s Arab and Jewish population numbers only 40,000 individuals, with Arabs and Jews being equal in number, their coexistence is absolutely peaceful and they have even forged social and commercial ties over time. That said, there have been cases in which Jewish families have sent their children to join the Israeli occupation army.

The Israeli influence, supervised by the United States, is very strong in Panama. One example is that Panama is one of the only two Latin American nations, along with Mexico, that still do not recognize Palestine as a state. In the UN Israel-Palestine votes, the Panamanian diplomatic representation usually votes in abstention, which in practice generally amounts to supporting Israel.

Read: Liberation Theology and Politics: From Latin America to the Middle East

However, the former Panamanian president Juan Carlos Varela paid a visit to Ramallah where he met with Palestinian Authority President Mahmoud Abbas in May 2018, declaring his support for the formation of a safe, stable, and peaceful Palestinian state. Also in 2018, the Free Trade Agreement between Panama and Israel was signed, strengthening the already vibrant commercial relationship between the two countries.

Panama has always been in the crosshairs of imperialist powers. Its privileged geographical position makes it a strategic territory not only as a gateway to Central and South America, but also as a critical passageway between the Atlantic and Pacific Oceans thanks to the Panama Canal, a project that the U.S. was able to snatch from the French at the end of the 19th and early 20th centuries.

Israel appeared in Panamanian society and military several years ago.

Panama losing its interests in the region is not a development that the U.S. can afford. Israel appeared in Panamanian society and military several years ago and the collaboration between both countries in this aspect has been constant – needless to say that the U.S. is happy with this “friendship.”

As soon as the infamous photo of the Panamanian policemen shooting the figure with the keffiyeh while being advised by Israeli instructors was made public in Panamanian media and social networks, the Arab community and several voices of local society were heard, resulting in a public apology by the police. Yet, Israel is unfazed. Israeli summer camps offering military training where even minors and tourists pay to go shoot figures in Arab dress continue their activities. Can you imagine what would happen if in a country somewhere in the world civilians or soldiers were trained to shoot at figures with the Jewish kippah?

Most of the Arabs in Panama are Muslims; many Arab women wear the hijab, the traditional headscarf that many female followers of Islam wear, and it is also possible to find men and women wearing keffiyeh. Knowing that the police of Panama, their country, and the very state body created to protect them, is being trained to kill people who look like them cannot be a pleasant feeling.

In neighboring Colombia, a few months before elections, there is a latent possibility that alternative movements will take power through democratic procedures. A large section of Colombians still remember that a few decades ago, a large part of a political party called the Patriotic Union, which opposed the traditional Colombian establishment, was eliminated through assassinations that in many cases went unpunished.

VIDEO: What are ISRAEL’S interests in LATIN AMERICA?

It has been proven that the paramilitary forces responsible for thousands of these deaths received advice from former Israeli military personnel. Countries like Argentina, Guatemala, or Honduras also still remember the role that Israel played in providing arms, and logistic and diplomatic support to dictatorial regimes that committed abuses against their peoples.

Many Panamanians are aware of the history of their neighboring countries. They are also clear that their country is a U.S. colonialist target. The U.S. invasion of Panama at the end of 1989 with the supposed objective of overthrowing General Manuel Noriega, a former CIA agent, and the mysterious plane crash in 1981 causing the death of General Omar Torrijos, who displeased Republicans by advocating for Panama’s rights and negotiating new terms for the administration of the Panama Canal with former U.S president Carter, are two facts that continue to serve as open wounds in the nation of the isthmus. Not all Panamanians welcome the fact that the U.S. protégé has so much influence over their military and police apparatus. It is not just the Arabs of Panama who have been upset by recent events.

The political stability of Panama is remarkable with the country being a place of peaceful coexistence for many cultures, and the Panamanian people know that what the police did was wrong. Its rectification has not really convinced Panamanian Arabs, but at the same time something important has happened: thanks to the fact that thousands of Panamanians did not remain silent, it is very likely that, at the very least, such an abomination will not be repeated on Panamanian soil and that the Israeli hasbara machine will think twice next time before provoking a community that, although far from its ancestral lands, is still part of them.