The Turcos of Latin America: The Story of 20th-Century Ottoman Migrants

Latin America hosts nearly 30 million of Arabs of Ottoman heritage, who arrived in with Ottoman passports long time ago. 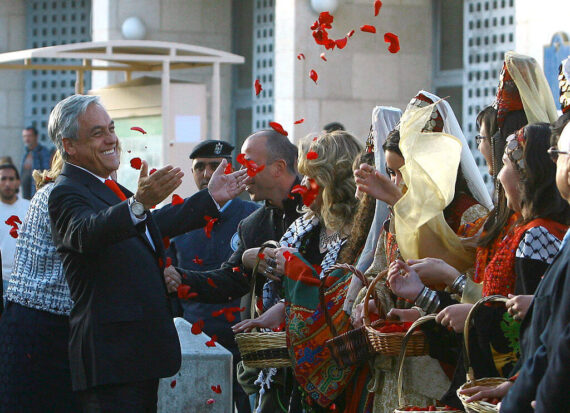 Former Chile's President Sebastian Pinera is greeted with petals upon his arrival at the Church of the Nativity, believed to be the traditional birth place of Jesus Christ, in the West Bank city of Bethlehem on March 5, 2011. Photo by Musa Al-Shaer, AFP via Getty Images

When Gabriel Turbay Abunader, a son of Lebanese immigrants, ran for the Colombian presidency in 1946, an especially turbulent period in Colombia’s democratic history, he was the target of vicious criticism by the conservative media and public opinion of the time.

Despite belonging to a well-respected family of jurists and being a respected doctor himself, Turbay suffered virulent attacks – not for being a socialist, but for being a “Turco.” El Siglo, the main right-wing newspaper at the time, constantly appealed to Colombian society’s nationalist spirit calling on voters to vote against Turbay because he had “no Colombian blood whatsoever running in his veins.”

At the time, in contrast with other countries in the region like Argentina and Brazil, Colombia did not have a strong immigration policy with its immigrant population standing at 0.5%. Arab Colombians interviewed by the authors of the magnificent book The Arabs in Colombia: From Rejection to Integration, stated, “The establishment would have never allowed a ‘Turco’ as a president.” However, decades later, in 1978, another “Turco,” this time by the name Julio César Turbay Ayala was elected president of Colombia.

Being called a “Turco” was not a compliment in a country whose elites considered themselves superior due to their European ancestors. Turcos, at the best, were supposed to be the salesmen of basic products like clothes or certain foods.

Anyone coming from the Middle East was contemptuously classified as a “Mohammedan” regardless of whether they were Muslim or not, and authorities warned against their “exotic” costumes.

Anyone coming from the Middle East was contemptuously classified as a “Mohammedan” regardless of whether they were Muslim or not, and authorities warned against their “exotic” costumes. Perhaps, this initial discrimination urged the Arabs who arrived in the region to try to forget their origins and integrate as fast as they could. It was a matter of basic survival, after all.

The first wave of Arab immigration to Colombia and to Latin America as a whole occurred at the end of the 19th century. These migrants came mostly from the Levant. Mainly as a consequence of the worsening condition of the Ottoman Empire, which was reaching its end, young Levantines left their homes either fearing being recruited for war or simply seeking a better future in the Americas. Since they came with a Turkish passport, natives called them “Turcos” – the Spanish word for Turkish.

Later, when the British Empire replaced the Ottomans and the creation of a Zionist entity in historical Palestine became a reality, a second wave of Palestinians, Syrians, and Lebanese immigrants crossed the Atlantic populating almost every country of the Latin American geography. The largest number of Arabs arrived in Argentina, Brazil, and Chile, but large numbers also landed in Honduras, El Salvador, and Colombia.

VIDEO: Why Chile is giving citizenship to Palestinian refugees

The colonial past of Latin America took a toll on the Levantine immigration: most of the Latin American elites with European origins saw the arrival of “Orientals” as a threat to the incipient identity of the population of their countries and more resources and facilities were given to immigrants from Germany, Italy, and Spain.

For the Arabs, the journey to their new home was one of sorrow and heartache. Yet, there was no time for tears once they arrived on the shores of their new countries. In many cases, their identity was diluted from the very beginning. Sitti (Arabic for my grandma) came twice to Colombia: the first time in the 1930s and finally in 1952. Back in Palestine, her name was Rahme, the Arabic for mercy, but when she arrived before the Colombian immigration authorities, the officer in charge wrote her name down as “Carmen.” And this was her name until her death in 2004.

Many Arabs had a similar experience of having their first and last names changed. It is something they generally accepted without protesting.

Many Arabs had a similar experience of having their first and last names changed. It is something they generally accepted without protesting. The sadness in their hearts was so devastating that the only antidote was never to look back. Maybe this is the reason why the next generation of Arab Latin Americans is not very concerned with current matters in the Middle East.

Those who lived through the excruciating pain of departure just wanted to move on. Most even tried to forget their language. Perhaps the link that constitutes the most solid bridge between their Arab heritage and the younger generations of Arab Latin Americans is food. For instance, in my hometown, Barranquilla, in the north of Colombia, delights like kibbehs, hummus, pita bread, and stuffed grape leaves are almost considered typical of the region.

My aunt Odette, who passed away in 2006, was known as “Turca” in the city’s market. Every Saturday, she drove her 56 Chevy downtown in search of eggplants, cucumbers, and cabbage for Sunday’s food festival, as I warmly recall them. “Turca, I saved the best eggplants for you today,” I remember a salesman shouting to her in his musical Caribbean accent when I joined her once in one of her visits to the market.

However, the flavors that the Levantine immigrants brought to the New World were not always considered delicacies. In the early 20th century, a mayor of the Caribbean Colombian city of Cartagena, one of the primary ports of entry for Syrian and Lebanese immigrants, issued a law forbidding “Oriental” food. He believed that the migrants were feeding the natives “donkey’s food.” It should be noted that Cartagena is the Colombian city with the most colonial Spanish influence.

Palestinians in Chile also have an influential group of lawmakers and politicians who belong to different parties but unite around the Palestinian cause.

Today, the sons, daughters, grandsons, and granddaughters of those who left the Levant in the last century seeking a better life in Latin America have key positions in the region’s politics, culture, science, sports, and economy. Most of them are too busy being successful or often struggle to remember where they came from.

Although in almost every country in Latin America one can find cultural or social organizations run by the local Arab communities, perhaps the most developed one is the Palestinian-Chilean community. With remarkable figures in every field of this Andean nation, the Palestinian-Chileans even have a 100-year-old professional soccer team named “Palestino.”

Palestinians in Chile also have an influential group of lawmakers and politicians who belong to different parties but unite around the Palestinian cause – something that cannot be found anywhere else in the continent. They have traveled back to Palestine, which more often they simply call “home,” with some being rejected entry by the Israeli occupants of their lands.

In other countries like Ecuador, El Salvador, Honduras, and Argentina, Arab descendants of migrants have been elected as presidents. However, they have not shown much loyalty to their ancestors’ homelands, and instead have surrendered themselves to the imperialist interests that subjugate their home countries.

Yasser Arafat was present at the summit of the Non-Aligned Countries held in Colombia in October 1995. He was interviewed by Yamid Amat, one of Colombia’s most respected journalists who is also of a Palestinian descendant. Amat asked Arafat why he signed the Oslo Accords with Israel in 1993.

Although now we know the terrible consequences of the accords, Arafat answered Amat in the following words, “Yamid, you have sons. Are your sons more Colombian or more Palestinian today?” Amat answered, “Colombian.” Arafat continued, “You see? That’s why I did it.” Putting aside any discussion of Arafat’s political motives, Arafat understood that the Palestinian diaspora in Latin America tended to forget where they came from.

With every new generation of Arab Latin Americans, the memory of the past fades further into the background. What is certain, though, is that in Latin America somebody will always be called “Turco/Turca” to remind everybody around that a part of this chaotic melting pot under the Río Grande once received thousands of Arab immigrants who came with little luggage but great hopes.