Many undocumented migrant workers are being illegally used by the French authorities to construct the venues for the Paris 2024 Summer Olympics. 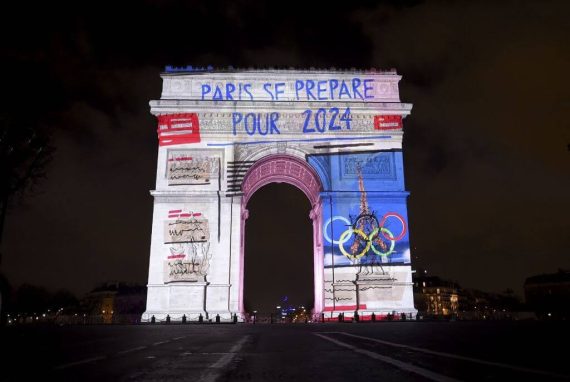 Images with a slogan reading "Paris is getting ready for 2024", refering to the 2024 Olympic Games that Paris was awarded, are projected on the Arc de Triomphe monument during a laser and 3D video mapping show as part of the New Year celebrations in Paris on December 31, 2017. Photo by GUILLAUME SOUVANT/AFP via Getty Images.

According to the social and solidarity economic plan of the 2024 Olympics, the International Olympic Committee, and partner organizations are working to ensure that young people and those struggling to find work can find employment in jobs created by Paris 2024 Summer Games. However, what is the human cost of this sporting event? Recently, some alarming facts have come to life which show the dark side of this athletic extravaganza.

A dozen unlawful migrant employees were involved in the construction of the Athletes Village in the Parisian suburb of St. Denis. The recent discovery of such undocumented workers toiling at Olympic construction sites reveals the unscrupulous subcontracting network at the heart of delivering the Paris 2024 Olympics. This may just be the tip of the iceberg.

The uncovering of mostly minority ethnic undocumented labour has led to only 100 checks being carried out by authorities despite thousands being employed constructing the many venues that will be used to host the Games. Why they are reluctant to investigate the full extent of the problem remains a mystery, though one may guess as to the reason.

These undocumented workers will likely be employed on poor terms and conditions and not receive the pay and benefits that lawful employee should expect to receive in France. The discovery of the abuses of migrant labourers comes as France brands its Olympics as the ‘Games for social inclusion of refugees and asylum seekers.’ Furthermore, the French Government supports the Olympic Refuge Foundation ahead of Paris 2024.

These high-minded aspirations appear to be little more than a blatant attempt to mask the truth about French society and sport. Ground-breaking research shows that even amateur French football, along with that of other European countries, discriminates against ethnic minority immigrants.

Robert Oulds, Executive Director of ImpACT International, told Politics Today that “It would be ironic, if it were not so tragic, that France’s showpiece tournament aims to raise awareness as to the plight of refugees whilst exploiting those very same migrants. The French Olympic authorities are taking the hypocrisy of virtue signalling to new extremes. President Macron’s showpiece tournament may hide the trouble that France has found itself in for a few weeks, but the dishonour of exploiting labour in service of building their stadia will stain his reputation.”

“Having experienced life in France, where workers’ rights are so neglected, it is no surprise that so many migrants and refugees are choosing to cross the English Channel in search of a better life in Britain. Their hopes may, however, be dashed.”

Ultimately Oulds finds that “The bogus claim repeatedly made by Remainers that staying in the EU was the only way to protect workers’ rights was ridiculous.”

“British standards and protections exceed those set by the European Union. Working people in Britain know that aim of Brexit is about the opportunity to get a well-paying job. Indeed, Remainers’ like Lord Rose campaigned for a low-wage economy. Far from some employment Nirvana countries like France just want to continue exploiting the vulnerable while pretending that they care about migrants,” concludes Oulds.

How are the games affecting the property market?

Making matters worse, the 86,000 acre Olympic and Paralympic village is being built in St. Denis to provide athletes with a place to live and is set to be used as a residential neighborhood that is expected to provide an estimated 5,000 homes once the games end. As part of the “Grand Paris Hub” project to renovate the St. Denis suburb, a new train station, better transport links, new housing and increased public facilities will be created.

Apart from the Olympic village, the hub plans to build a high-class complex building used as office space, two forty story hotels, shopping and restaurant facilities and a grand exhibition centre. In essence, such a grand project looks extremely attractive to foreign investors and those who can afford to enjoy such luxuries.

However, the reality does not look quite exciting for those less fortunate and will hit those families who are unable to afford to live in St. Denis after the Games due to the rise in property prices that the development will cause. It is estimated that there could be an increase of 10% to 15% in property prices in the surrounding areas with a potential for apartments to increase by up to 25% around the new transport facilities created in the St. Denis suburb. Thus, with property prices already skyrocketing in Paris’s suburb towns, residents will be left scrambling to afford basic living conditions.

The northern region of Paris already suffered from years of neglect, unregulated infrastructure, and a less well-off population than that of central Paris. Therefore, this expected spike in property prices will only make matters worse by increasing the division and gap between Paris’ wealthy and poor residents. A rise in poverty levels should be expected at the cost of lavish mega sporting events.

When assessing the Paris Olympic bid evaluation, the Institute for Human Rights and Business accessed that the French were indeed committed to making use of existing infrastructure meaning that there would not be a substantial risk of displacement of populations to create new game venues. Additionally, according to the IOC, the Paris Olympics will already feature 95 per cent of the existing and temporary venues in the city.

However, what can be seen since Paris won the bidding process to hold the Olympic Games, is quite the opposite of the above-mentioned statement, instead, the creation of the Olympic Village in the Northern suburb has led to the forced eviction and relocation of thousands. The human cost of a mega sporting event of such large magnitude comes as no surprise of course, however, the lack of response from the IOC and its member committees is quite shocking to say the least.

Apart from the forced relocation of residents in the St. Denis suburb, schools and local businesses have been coerced into shutting down to make space for the building process. Unsurprisingly, the IOC has not done anything to stop the destruction of over 20 businesses, 3 schools, hotels, one student accommodation complex, and housing for migrant workers.

Although residents and workers have been offered temporary housing relocation offers, local protests have been underway since the Olympic village project was announced. Alongside this, a rise in unemployment will come because of business closures and relocations, exacerbating the divisions between the rich and the poor.

One representative for the migrant workers’ hostels complained about the temporary housing relocation claiming that the location was far from transportation links, little or no access to restaurants, grocery stores, cafes, or a disable friendly environment. Students are left to find more expensive housing closer to the capital whilst business owners are concerned over damage to profit earnings.

It should go without saying that if a host country has a minimal amount of pre-allocated land for the building of the iconic Olympic Village they simply should not be considered or allowed to enter the bidding process. This means that countries who wish to host future Olympic Games should show evidence of allotted space that is available to be used for the creation of new venues. This will provide assurance that the human cost of building such grand stadiums and racetracks will be mitigated and decreased, ensuring as little harm as possible happens to those communities.

Lara Hamidi is studying History, Politics and International relations Royal Holloway, University of London. She is a researcher at ImpACT International for Human Rights Policies, a non-governmental think-tank based in London, United Kingdom, which is concerned with policies at the intersection of states and businesses.