Parties, Politicians and Dispositions towards the July 15 Coup Attempt

While the July 15 coup attempt and the immediate aftermath produced a unified synergy in favor of democracy, in the year since then this has not been the case. The Republican People's Party (CHP) and the People’s Democratic Party (HDP) in particular initially stated they were against all kinds of coups, yet lately they have made certain unjustifiable allegations that could cast a shadow on the process of uncovering the truth about the night of July 15, 2016. 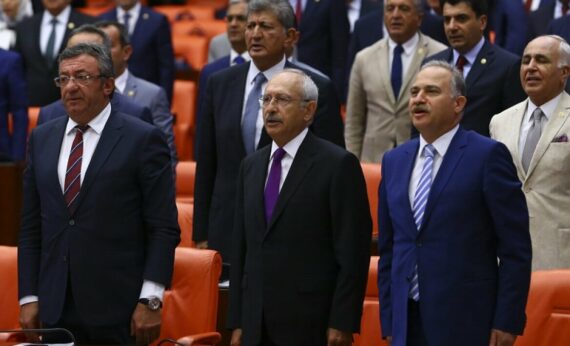 While the July 15 coup attempt and the immediate aftermath produced a unified synergy in favor of democracy, in the year since then this has not been the case. The Republican People’s Party (CHP) and the People’s Democratic Party (HDP) in particular initially stated they were against all kinds of coups, yet lately they have made certain unjustifiable allegations that could cast a shadow on the process of uncovering the truth about the night of July 15, 2016.

The most obvious indication of a unified anti-coup synergy was the spontaneous reaction by Turkish politicians on July 15 and July 16, and the Yenikapı Demonstration on August 7. President Recep Tayyip Erdoğan, Prime Minister Binali Yıldırım and the Chairman of Nationalist Movement Party (MHP) Devlet Bahçeli announced that they were never-ending advocators of democracy in all circumstances. CHP Chairman Kemal Kılıçdaroğlu also made similar strong statements against the coup attempt. The main catalyst for this active resistance against the coup attempt was in fact the message conveyed by President Erdoğan via Face Time that night, when he called for a unified national reaction.

The next day, all politicians formed a more unified nationalist stance against the coup attempt. Chief of the General Staff Hulusi Akar too attended parliament at the moment, and was an indispensable component of this anti-coup bloc. In the session, the Chief of the Parliament İsmail Kahraman said “our national anthem is our manifesto and we are all united nation.” Prime Minister Yıldırım said “all those who are involved in the coup attempt are traitors, regardless of their military ranks” after thanking all political politicians for their support. Kılıçdaroğlu said “this is definitely a coup attempt against our Republic and our traditions.” Bahçeli too said that “with the coup attempt, coup collaborators embedded into the Turkish army were identified and clarified.” HDP Chairman Selahattin Demirtaş was not able to attend the parliamentary talks as he was out of the Ankara; however, HDP spokesman İdris Baluken asserted that they were against all kinds of military coups.

In this atmosphere, the Yenikapı bloc was formed not only by political parties but also by the people, who came from various ideological segments of the society. The most prominent aspect of the Yenikapı bloc was the sharp stance against all kinds of coups and a clarity about the identities and aims of the perpetrators. A national stance, one that included the cooperation of civil and military institutions, soon emerged against FETO, whose mafia-like organization and illegal actions were uncovered. Unfortunately, this unity started to crumble in a short period of time. After the national declaration at the parliament, politicians reiterated anti-coup messages for days; however, the CHP and HDP’s hesitant disposition in this matter distanced them from their initial political reflexes.

The Yenikapı Demonstration on August 7 was organized as the second platform to demonstrate national unity against the coup attempt, after the first one in parliament on July 16. Yet, the HDP was the first to stay out of this second unified platform. Demirtaş made unjustifiable accusations about the Justice and Development Party’s (AK Party) involvement in the coup, both while he was in Turkey and abroad. Hence, the HDP once again fell into the trap of illegal activities, just like it had with its treatment of Kurdish politics, with its disposition towards the coup attempt. Idris Baluken’s tweet: “AKP-CHP-MHP partnership isn’t new; it’s an alliance against Kurds since June 7 with the excuse of the survival of the state and fight against terrorism” was the confirmation and declaration of the HDP’s excluding itself from the anti-coup alliance. The HDP’s absence at the Yenikapı Demonstration was also a sign of their unsustainable image in the new path of Turkish politics.

On the other hand, the CHP Chairman Kılıçdaroğlu declined to attend the Yenikapı Demonstration initially, saying “Erdoğan tried to increase his political influence on the people through criticizing the opposition party.” However, after Erdoğan and Yıldırım’s insistence, the CHP chairman changed his mind saying “we will attend the Yenikapı demonstration for the same reason we were at the parliament on the night of the coup attempt.” At the same time, he underlined that he would continue to be a legal part of the Turkish politics by accepting the invitation. The MHP Chairman Devlet Bahçeli announced that they were against the coup attempt, and beyond taking part in the demonstration, they also supported the government in these difficult days without wavering.  Bahçeli maintained his stable political stance behind the AK Party during the Yenikapı Demonstration and during the constitutional referendum campaign. The MHP saw itself as an important proponent of the political and institutional change the AK Party wanted to see in Turkey.

As a part of his “No” campaign in the lead up to the 16 April referendum, and a part of his general “anti-Erdoğan” campaign, Kemal Kılıçdaroğlu tried again to discuss unproven speculative details of the coup attempt in the public sphere and thus he took unexpected risks both socially and politically. CHP politicians abused clear evidences of the coup attempt for their inter-party politics. By reiterating claims first made by Fetullah Gülen that “the coup was planned and controlled,” the CHP’s view converged with that of FETO.

These statements by Kılıçdaroğlu became a signal of just how marginalized he had become from the national political scene. In order to counteract Erdoğan’s politics, Kılıçdaroğlu started to voice uncertain statements that downplayed the treacherous and violent aspects of the coup attempt. Abstaining from the anti-coup bloc thus was a calculated political mistake, and the balance of national unity was tipped against the HDP and CHP politicians who involved themselves in that alliance.

In the CHP’s report on the July 15 Coup Attempt, the expression “controlled coup” was reiterated. These implications and disinformation about the coup attempt have created a controversial discourse that is also harmful to the fight against these kinds of illegal bloody attacks. In any case, these allegations circulated by the CHP did not bear fruit, and were seen by the public as more attempts by the party to criticize the AK Party’s policies.

What is being done by the CHP and HDP is actually an attempt to downplay the government’s success in thwarting the coup attempt through inter-party political quarrels. Ultimately, the CHP’s allegation that the government – which was in fact the main target of the coup attempt – was responsible for July 15 was viewed by the people as simply a part of the party’s constricted politics.