Although it’s been over 8 years since the beginning of the Arab revolutions, the developments in Sudan show that revolutionary appetite is still alive across the Middle East and the Arab world. 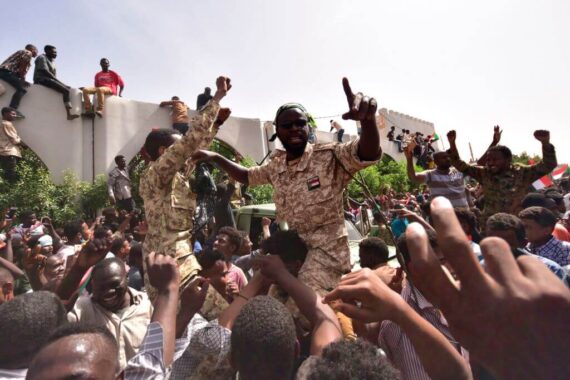 Members of the Sudanese military gather in a street in central Khartoum on April 11, 2019, after one of Africa's longest-serving presidents was toppled by the army. Getty Images

The anti-government protests that erupted in different cities across Sudan on December 19, 2018, rapidly evolved into a mass popular movement that started to threaten the rule of Omar al-Bashir, who had been in power in the country for three decades. Increasing pressure on the government in Khartoum forced Al-Bashir to seek for regional and international support that would help him keep his grip on power. As part of these efforts, Al-Bashir made visits to regional countries, including Qatar and Egypt, as well as war-torn Syria. He became the first leader to meet with Bashar Assad since the start of the civil war in Syria in 2011. While all these countries, and others such as Saudi Arabia and Ethiopia expressed support for the continuation of Al-Bashir’s rule, the Sudanese people continued to protest against the government.

As the protests grew, pressure on the Al-Bashir regime intensified. Thousands of demonstrators gathered around the Ministry of Defense and the headquarters of the Sudanese Army in the capital Khartoum and called for the resignation of Al-Bashir. Protestors even called the military to dismiss him from his position. These developments opened a new chapter in the country’s history. On the morning of April 11, the Defense Minister, Awad Ibn Auf, made a televised address and said: “I announce as minister of defense the toppling of the regime and detaining its chief in a secure place.” Ibn Auf also stated that President Al-Bashir has been removed from his duties and that a transitional military council, which will be headed by Auf himself, would govern the country. Following two years of a transitional period, democratic elections will be held, leading the country to civilian rule.

Increasing pressure on the government in Khartoum forced Al-Bashir to seek for regional and international support that would help him keep his grip on power. As part of these efforts, Al-Bashir made visits to regional countries, including Qatar and Egypt, as well as war-torn Syria.

It can be argued that the motivations of protestors that led the toppling of the Al-Bashir government were similar to that of the masses during the Arab revolution protests that began in December 2010 in Tunisia, and which followed in Egypt, Libya, Syria, and Yemen. The main motivations of these revolutionary movements were establishing democratic political systems, respect for rights and freedoms, the elimination of economic problems and the tackling of income inequality. Such motivations were also present in the protest movement that led to the termination of a 30 year old regime in Sudan.

In addition, the methods and instruments utilized by Sudanese protestors were also similar to that of the Arab revolutions period. The masses gathered in largely peaceful protests and the youth played an important role in generating solid political opposition. The protestors also utilized social media and traditional media tools in order to make their voice heard both in and outside of the country. The military’s position was also crucial, as the army did not take a direct stance against the masses.

Just like the Arab uprisings that began in 2010, the main motivations of the revolutionary movement in Sudan are establishing a democratic political system, the respect for rights and freedoms, elimination of economic problems, and the tackling of income inequality.

During the Arab revolutions period, each revolution attempt experienced a different path. Sudan has also been following a unique process. Although the military’s seizure of power cannot be considered as a revolutionary act, it is an important development that would eventually pave the way for a smooth transition rather than a civil war or institutionalized instability. Despite grip pictures coming from the country, the fall of the Al-Bashir regime would be considered as a change for the emergence of a new and civil regime in the country. As the Defense Minister reassured protestors for a democratic future, it is now the army’s responsibility to gradually rescind from political duties. These developments are a reminder of the early post-revolutionary period in Egypt as the transitional council led the country to elections less than a year following the fall of Hosni Mubarak. However, the democratization efforts of the Muslim Brotherhood were unsuccessful and the counter-revolutionary forces, including the Egyptian army, staged a military coup that led to the establishment of the most repressive regime in the country’s history.

The developments in Sudan are a reminder of the post-revolutionary period in Egypt, as the transitional council led the country to elections less than a year following the fall of Hosni Mubarak. However, democratization efforts were unsuccessful and led to the most repressive regime in the country’s history.

For this reason, it can be argued that the protest movements in Sudan and Algeria have seriously disturbed these counter-revolutionary actors that perceived such developments as direct threats to the regional status quo. Therefore, it is of great importance for revolutionary actors to put pressure on military powers to hand over power to civilian administrators. This is also a responsibility of the Sudanese and Algerian armies – if they are to contribute to the successful revolutionary transformations of their countries.

Although it’s been over 8 years since the beginning of the Arab revolutions, the developments in Sudan show that revolutionary appetite is still alive across the Middle East and the Arab world. Social unrest and the toppling of long-time leaderships in Algeria and Sudan, civil wars in Libya, Syria, and Yemen, the on-going competition and power struggle in regional politics, and the continuing dissatisfaction of the Arab masses illustrates that Middle East politics will continue to witness popular uprisings in the coming years.