What Is the Impact of the Polish Constitutional Court Ruling on the European Union?

The conflict between national Polish law and EU law is not the first, and most likely it will not be the last. 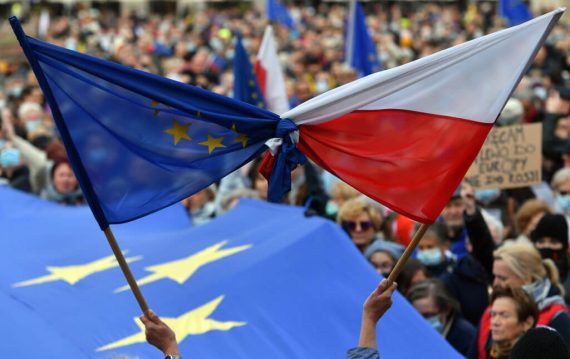 Demonstrators hold bound flags of the European Union and Poland during the demonstration. A Pro-European demonstration was held by opponents of the right-wing Law and Justice Party (PiS) following the judgment of the Polish Constitutional tribunal recognizing the superiority of Polish law over EU law. Photo by Alex Bona, SOPA Images via Getty Images

In sum, quite a few conditions need to be fulfilled before the top Polish court would consider an action by the EU as unconstitutional. Still, this is probably the most radical stance taken by a national top court when it comes to the age-old debate of whether and under what conditions EU law is superior to national law.

Read: How realistic is the European Defense Union?

In an interview, the president of the ECJ, Belgian professor Koen Lenaerts, stated that “when [Hungarian PM] Orban says that primacy of EU law is only valid for competences attributed to the EU, he is absolutely right. However, then, there is the question whether something is within or outside the scope of the EU’s competences, and who should rule on this. The ECJ has the monopoly to supervise respect for the distribution of competences between the EU and member states.”

Quite a few conditions need to be fulfilled before the top Polish court would consider an action by the EU as unconstitutional.

The dispute however is that many top courts of member states have in the past openly distanced themselves from the interpretation taken by the ECJ on this.

We have no doubt about the primacy of European law over national laws in all areas where competence has been delegated to the Union by member states. However, like the courts in many other countries, Polish Tribunal raises the question as to whether the monopoly of the Court of Justice to define the actual limits of entrusting these competences is the proper solution.

Read: Angela Merkel, The Leader of the Free World?

In this respect, in the interview regarding the Polish ruling, Lenaerts also mentioned, “It’s not the first time this happens. Everyone speaks about Poland and Hungary, but we, for example, also have a case from Romania.”

In a piece for Brussels Report, I provide an overview of the occasions where national top courts have challenged the superiority of EU law, listing examples from Germany, France, Italy, Spain, Lithuania, Belgium, the Czech Republic, and Denmark.

The German example is best known given that the European Commission opened an infringement procedure against Germany earlier this year over a 2020 ruling by its Constitutional Court, which had ruled that the European Central Bank (ECB) had overstepped its mandate with its sovereign bond purchases, while also scolding the ECJ for not doing a thorough enough job reviewing the ECB’s activities.

Thereby, the German Constitutional Court ruled that the ECJ in Luxembourg acted ultra vires (beyond one’s legal authority), adding that the ECJ’s judgement was “simply not comprehensible” and, as such, had been “objectively arbitrary.”

This is reminiscent of the criticism by former German president Roman Herzog in 2008 who wrote that the ECJ “invents legal principles serving as grounds for later judgements” and also “undermines the competences of the member states even in the core fields of national powers.”

In the end, the key problem is that the ECJ is part and parcel of the EU system and therefore it is not neutral in the discussion on whether a competence belongs at the national or at the EU level. This is often up for interpretation.

Therefore, I have suggested the creation of a so-called subsidiarity court, a new intergovernmental institution superior to the EU legal order and comprised of representatives of the judicial branches of EU member states, exclusively tasked to stop the European Court of Justice from adopting unacceptably extensive interpretations.

Meanwhile, the dispute between Poland and the EU will need to be sorted out. In effect, the Polish ruling followed a question of clarification coming from the Polish government on when precisely EU law is superior. Supposedly, the Polish government may try to use this as justification for not complying with ECJ rulings, for example on the ECJ ordering it to shut down a coal mine near the Czech border or with regards to fines that have resulted from this. Here, compromises are possible, even if it may not be obvious.

Several EU member states, including Belgium, the Netherlands, and Sweden, are pushing to cut EU funds to Poland as a punishment for violating the EU’s rule of law. This may sound appealing to some, but it is a tricky path. There is a serious danger of double standards: why would Poland need to be punished and not Romania, which was condemned  by the European Court of Human Rights over the firing of the chief prosecutor of the National Anticorruption Directorate? That’s not to say that there is no problem with the rule of law in Poland, of course, but to let other democracies be the judge of that is a risky game.

Fundamentally, the main action the EU can take is to stop fueling cronyism in member states by indulging them with a lot of EU funds. A lot of those EU funds all too often support local oligarchs, who often acquire large amounts of political power on that basis as well. In Southern Europe, organized crime groups have skimmed off a lot such money.

In that sense, to cut EU funds is a great idea. After all, a 2016 Centre for Economic Policy Research report concluded that “EU structural funds [are] negatively correlated with regional growth.” However, it should happen equally and for everyone.

Pieter Cleppe is the editor-in-chief of the website BrusselsReport.eu. Between 2008 and 2020, he represented British EU affairs think tank Open Europe in Brussels. He has served as a Belgian cabinet advisor and is a lawyer by training. He is @pietercleppe on Twitter.