Survivors in Canada had repeatedly demanded that the pope apologize for the Church’s role in the "cultural genocide." 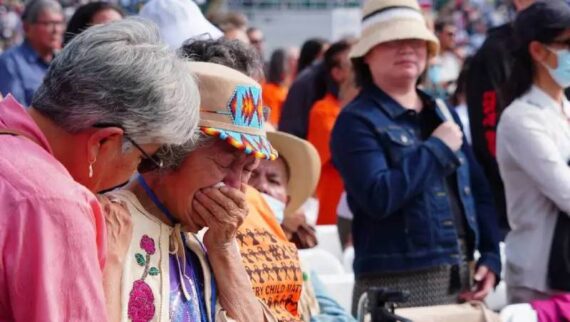 On July 25, 2022, Pope Francis personally apologized for the Church’s role in the decades-old plight of indigenous communities in Canada. More than 150,000 indigenous children were forced to attend the church-run residential schools, where they were physically and mentally abused and died in countless numbers.

“I am deeply sorry—sorry for the ways in which, regrettably, many Christians supported the colonizing mentality of the powers that oppressed the Indigenous Peoples,” Pope Francis said, as he spoke to a crowd of 15,000 people during his week-long “penitential pilgrimage.”

Survivors in Canada had repeatedly demanded that the pope apologize for the Church’s role in the “cultural genocide” with calls multiplying last year after the groundbreaking discovery of unmarked graves near residential schools.

The findings triggered a nationwide outrage over the atrocities committed against Canada’s Indigenous communities and gravely affected the pope’s reputation. “I feel sorrow and shame for the role of a number of Catholics,” the pope said to the representatives of survivors in Rome on April 1, 2022. Last year, Canadian Prime Minister Justin Trudeau was the first head of state to publicly apologize for the crimes committed by residential schools.

Though the Church’s apology in Canada was the latest to hit the headlines, it wasn’t the first apology by Pope Francis or his predecessors. In fact, it was a further addition to a series of papal apologies.

Last November, the Swedish Church officially apologized for its centuries-old repression and abuse of Sami people.

The Sami are indigenous to countries like Sweden, Finland, Norway, and northern Russia. For more than 400 years, the Swedish government, along with the Church, suppressed their language and culture, subjected them to racial abuse, and forcefully assimilated them to Christianity. Their land was exploited and their social ties were broken. Resulting from the colonial school system practiced at the time, the majority of Sami children were forced to leave their homes.

Read: The Pope and the Grand Sheikh of Al Azhar Show the Way Forward

“We have been curved inward on ourselves, we have not stood up to racism and abuse of power. Our backs are bent by the guilt we carry. We have placed unjust burdens on you. We have burdened your ancestors with shame and pain that has been inherited by new generations,” Archbishop Antje Jackelén said as he apologized during a special service.

The effects of “unjust burdens” mentioned by Jackelén are still traumatizing for many Sami people.

The apology will be made twice. A second public apology is expected in the upcoming Sámi church conference in Luleå in October 2022.

On October 6, 2021, Pope Francis expressed “shame” and apologized on behalf of the Roman Catholic Church for the grave acts committed by pedophile priests in France. His remarks came after a shocking report which revealed that 330,000 French children were sexually abused by Church authorities over a period of more than 70 years.

According to the independent commission report, an estimated 216,000 people were abused by priests, clerics, and other church figures. The report also revealed that most of the victims were boys aged between 10 and 13.

“I would like to express to the victims my sadness, my sorrow for the trauma that they have suffered,” Pope Francis said to his weekly audience in the Vatican last October. He urged all bishops in France to make sure that the church is “a safe place for all.”

The grave crimes of the Church and the demands for an apology have not been limited to the above examples. In fact, forceful assimilation, starvation, and sexual abuses have carved a bitter mark on the history of countries like Australia, Chile, and Ireland.

The willingness to apologize has almost become a defining characteristic of the modern papacy. Unlike popes in the past, Pope Francis stands with the victims and assures them of his support. Whether apologies are enough is up for debate.