The Vatican-Azhar ties are most profoundly illustrated when Pope Francis and Sheikh Ahmed signed the document on “Human Fraternity for World Peace and Living Together." 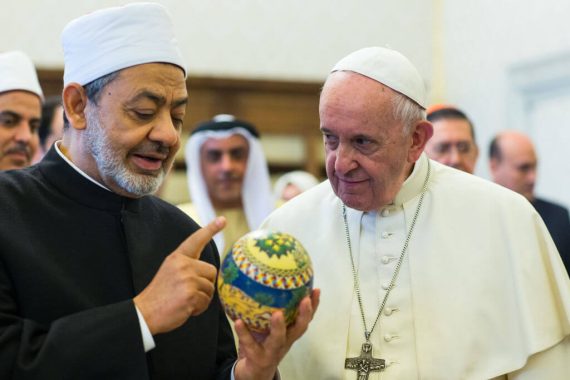 Throughout history, ties between Christian and Islamic leaders have had more downs than ups. It was Pope Urban II who launched the first Crusade in 1095 triggering almost two centuries of hostilities. But in recent times, relations have largely improved. Pope John Paul II made significant efforts to advance the cause of Catholic-Islamic relations. He condemned the siege of Sarajevo repeatedly. When John Paul II visited Damascus, and prayed at the Umayyad Mosque in 2001, it was the first ever Papal visit to a mosque. Pope Benedict XVI prayed in the Blue or Sultan Ahmet Mosque in his visit to Istanbul in 2006.

However, Benedict’s gesture was in large part to make up for what was seen as a disastrous Regensburg address in September 2008. In the speech, he cited a conversation between a Byzantine emperor and a Persian scholar, “Show me just what Muhammad brought that was new, and there you will find things only evil and inhuman, such as his command to spread by the sword the faith he preached.”

Most Muslims took offence at what they perceived to be the Pope arguing that Islam was inherently violent and evil. The former Pope perhaps to heal ties then changed his position from opposing Turkish entry to the European Union to supporting it. Relations with Al Azhar also were put on pause after Pope Benedict called for the protection of Egyptian Christians after an attack on a Coptic church in 2011. Benedict as a German Pope tended to see everything through a very Eurocentric prism.

Read: The Pope’s Visit to Iraq: How the KRG Tainted Its Message of Hope

Pope Francis has over the last seven years made strenuous efforts to reset ties. Aside from his meetings with the Grand Shaikh of Al Azhar, he has reached out to many figures in the Islamic World. In 2014, he visited Palestine and met with the Grand Mufti of Jerusalem, Sheikh Mohammad Hussein. This year he made the first ever Papal visit to Iraq in March and was able to sit down with Grand Ayatollah Ali Al-Sistani, one of the pre-eminent clerics in Shia Islam. Islamic prayers were uttered within the walls of the Vatican for the first time ever back in 2014.

The Vatican-Azhar ties were most profoundly illustrated when Pope Francis and Sheikh Ahmed signed the document on “Human Fraternity for World Peace and Living Together” in February 2019. The introduction described the document as “…a joint declaration of good and heartfelt aspirations. It is a document that invites all persons who have faith in God and faith in human fraternity to unite and work together so that it may serve as a guide for future generations to advance a culture of mutual respect…” This formed the basis for an ensuing Papal encyclical entitled, “Fratelli tutti” that was certainly forward thinking.

Productive ties between leaders of different religious traditions matter. One hopes that they retain a positive influence amongst their flock. Who knows if some of the more extreme elements might turn their heads when Popes, Grand Ayatollahs and Grand Muftis work together? One can only hope that increasingly such comings together include senior Jewish and other religious figures from other faiths.

That leaderships of major Christian and Islamic groups are reaching out to each other successfully is something to be welcomed. That said, there are those lower down who may not share this approach and have reservations. On both sides, there are those who believe the relationship may have gone too far, too fast.

It is the politicians and other influencers far more so than the religious figures who have driven division and rancor between Christians and Muslims. Perhaps the most damaging was the way in which Donald Trump won the 2016 elections in the United States whilst pushing for a complete and total shutdown of all Muslims entering the country. The devastating message for Muslims was that rather than this being an automatic exit from the race to the White House, this was a vote-winner and fueled Trump’s victory.

In the United Kingdom, Boris Johnson became Prime Minister despite a host of Islamophobic comments from him as well as other senior figures in the Conservative party. He infamously compared niqab-wearing women to “bank robbers” and “letterboxes.” A Tory backbencher Michael Fabricant MP shared a cartoon that depicted the mayor of London, Sadiq Khan’s head on a balloon engaged in a sex act with a pig. Elsewhere President Macron of France has described Islam as being in ‘crisis all over the world.’ He too looks as if he is weaponizing anti-Muslim sentiment prior to next year’s Presidential elections.

Children greet Pope Francis (L), and Ahmad Al-Tayyeb (R), Grand Imam of al-Azhar, during a Prayer for Peace attended by several religious leaders in conclusion of the "People as Brothers, Future Earth" interfaith meeting, at the Colosseum in Rome, Italy, on October 07, 2021. Photo by Riccardo De Luca. Anadolu Agency.

In Europe and North American anti-Islamic sentiment is rife. It has existed of course for centuries in differing forms but in the modern era the events of 1979 and 2001 certainly drove Islamophobia on. The Iranian Revolution saw a major rift with the West and notably the U.S. which continues today. The fatwa against the author Salman Rushdie did not help at all nor did the Danish cartoons crisis, both issues where the divides were considerable. The 9/11 attacks triggered huge anger in the U.S. and elsewhere but also a series of wars in Afghanistan, Iraq and elsewhere which saw hundreds of thousands of Muslim civilian lives lost.

The Islamist extremist attacks by the likes of Al Qaida and Daesh also drove these sentiments. The world stood with Paris, Berlin and London as they suffered vile attacks with major landmarks being lit up.

Much of the above anger is understandable. Such attacks were unconscionable. But the 9/11 attacks did not represent Islam and nor does Al Qaida and Daesh. For the overwhelming majority of Muslims, they are an abomination. Even Donald Trump pointed out that the greatest victims of Al Qaida and Daesh violence have been Muslims. However, at a public level, this is rarely understood. All too often the Western media focusses intently on the western victims of Islamist violence not the Muslims. Daesh’s beheadings of western journalists and aid workers in Syria led to military intervention but little was said of the much larger numbers of Syrians and Iraqis beheaded and even crucified by the group.

Read: Imams in Politics: Secularism vs. Religion in Mali and Senegal

However, too many leaders in Europe and North America instrumentalized this hatred as opposed to calming the situation and directing the struggle at those truly responsible. It was more convenient to depict Islam and Muslims as a threat than as part of the solution. This continues today as the likes of Viktor Orban of Hungary likes to portray his country as the last bastion of Christendom against the hordes of Islam as if Vienna was back under Ottoman siege once more. “Is it not worrying in itself that European Christianity is now barely able to keep Europe Christian? There is no alternative, and we have no option but to defend our borders.”

Anti-Immigration like Islamophobia is a vote winner. Hence Muslim immigrants are doubly vulnerable to this, depicted as a cultural, economic and a terrorist threat.’

Anti-Immigration like Islamophobia is a vote winner. Hence Muslim immigrants are doubly vulnerable to this, depicted as a cultural, economic and a terrorist threat’ even though research shows that every act of terrorism in the U.S. since 9/11 has been committed by a citizen or legal resident. The threat is not foreign as the far right likes to portray. But blame the immigrant anyway.

The treatment of refugees is also damning, not least when European powers do so little to help those making the terrifying dangerous Mediterranean crossings. Few make the difference between migrants and refugees, those fleeing conflicts and oppression. Our societies are the poorer for putting up walls, physical and psychological. We need to explore other means of resolving these crises without having to resort to inhuman incarceration or refusing to help save lives of innocent people.

Pope Francis tried to play a positive role. In 2016, he washed the feet of 12 immigrants, some of whom were Muslim and following a visit to the Moria camp on the Greek island of Lesbos, he arranged for the Vatican to host 12 Syrian Muslim refugees. But did this get the attention it deserved, and did it stem in any meaningful way the tidal wave of anti-Muslim, anti-immigration hatred? The Pope called on every Catholic diocese to host refugees but the take up was very poor.

Islamophobia still does not get the attention it merits. Many belittle the issue and fail to recognize how widespread this issue has become. Social media is a cesspool of hatred on all issues. In the first 24 hours after the Christchurch mosques’ massacres in 2019, Facebook removed 1,500,000 videos of the attack that killed 50 Muslims. Some uploads were watched over 20,000 times.

VIDEO: Message from the Pope and the Grand Imam of Al-Azhar on #HumanFraternityDay

The challenge then those who hold leadership positions in Christianity and Islam is how to challenge the impoverished and dangerous levels of public discourse. Top level discourse is to be welcomed and it is a story in progress but these leaders need to find new and potent ways to convince larger numbers of their adherents to focus on what unites Christians and Muslims not what divides them.

In a warmer climate and a more positive backdrop, the issues of grievance including the treatment of Muslims in the West and Christians in some Muslim majority countries can then be addressed to mutual advantage. It is hoped that political leaders can follow their lead rather than playing to their base and inspire more deep-rooted rapprochement between Christians and Muslims everywhere.

Chris Doyle is director of the London-based Council for Arab-British Understanding (CAABU). He has been director of the Council since 2002. He has organized and accompanied numerous British parliamentary delegations to Arab countries. Doyle is a frequent commentator in the international media on the Middle East. Twitter: @Doylech