The Iranian Reform Front called on the authorities to organize a referendum to end the crisis and demanded immediate, courageous, and innovative changes. 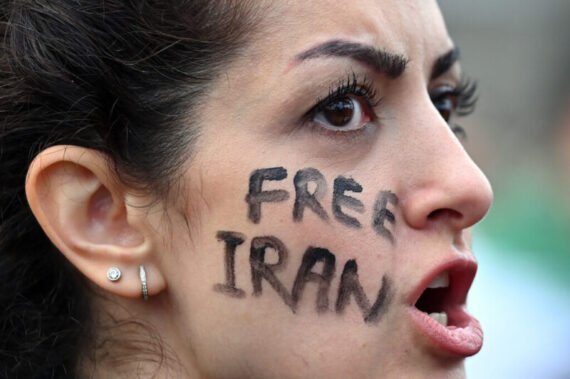 A woman attends a rally following the death of Mahsa Amini in Copenhagen, Denmark, on October 22, 2022. Photo by Anadolu Images

ince the death at the “morality police” station of 22-year-old Iranian Mahsa Amini on September 16, protests have not stopped all across Iran.

At the onset of the protests, Iranians were divided over Mahsa Amini’s death. She was first arrested in Tehran on September 13 for “improperly” wearing her hijab, and passed away three days later in hospital after she fell into a coma at the detention center, according to the UN report.

Demonstrators believe that protests started as a reaction to the government’s suppression of people’s freedoms, especially Iranian women’s freedoms. They also consider the Iranian government responsible for Amini’s death – or, as they believe, murder – due to excessive police brutality.

Supporters of the Iranian government consider the protests a conspiracy by Iran’s enemies. They believe that Mahsa Amini’s death was used as a pretext to carry out preplanned actions against their government, and find the official medical report by Iran’s Forensic Organization satisfactory. The report claims, “Mahsa Amini’s death was not caused by blows to the head or any vital organs or parts of her body”.

The protests went beyond Amini’s death with protestors seeking to overthrow the regime. Slogans used by demonstrators such as “Death to the dictator” and “Death to Khamenei” make their intentions clear.

So far, protests have taken many forms of rebellion against the state and legislative laws that restrict individual freedom, especially dress codes. Many Iranian women protestors have either cut their hair in the streets or burnt their headscarves in public places – videos of these women spread like wildfire on social media.

Some protesters try to ridicule Shiite clergymen by tossing their turbans off their head and posting such acts on social media.

Read: Will the Protests Open the Path to a Regime Change in Iran?

Despite the fact that Iranian authorities cut off social media and internet services, videos continue to spread showing Iranian police suppressing demonstrators with the use of violence.

Iran Human Rights (IHR NGO) claims that at least 304 people, including 41 children and 24 women have been killed in the ongoing nationwide protests and adds that “the numbers of deaths published are an absolute minimum.” “Reports of protester killings in the last few days are still being investigated.”

Media and human rights groups give information about the arrest of students and teachers by the police. Observers note the large participation of the youth, especially university students, in the protests.

Hengaw Organization for Human Rights has documented many arrests of juveniles and students. According to Hengaw, government agents abducted three juveniles between October 31 and November 3 in continuation of the wave of arrests by the Iranian security forces in Iran’s Kurdish region.

According to the Committee to Protect Journalists (CPJ), state officials have arrested dozens of journalists. Reporters Without Boarders (RSF) claimed that at least 42 journalists have been arrested throughout Iran since Amini’s death, stating that two of them are facing the death penalty.

Since the early days of the protests, top Iranian political and security officials such as Iran’s President Ebrahim Raisi and the Supreme Leader Ali Khamenei, condemned what they described as foreign interference in Iran’s internal affairs. These condemnations included the U.S., Israel, Saudi Arabia, France, the U.K., and Germany.

In an interview, the Iranian Minister of Security Esmail Khatib said, “In recent events, obviously there are the hands of Zionists in implementing, of the British in the media, and of the Saudis in financing. Full financial support has been given to Berlin’s degenerate media game, providing atmosphere, renting photographic equipment, providing facilities for journalists, and so on.”

However, the most prominent declaration during the protests was a joint statement of Iran’s Intelligence Ministry and the Intelligence Organization of the IRCG (Iranian Revolutionary Guard Corps). The statement confirmed that “[i]ntelligence evidence shows that the CIA had devised an extensive plan with the cooperation of allied spy services and reactionary proxies before the start of the unrest to initiate a nationwide chaos.”

Moreover, media outlets close to the Iranian government published a leaked audio recording of British-Iranian journalist Rana Rahimpour, a presenter on the BBC Persian television channel. In the recording, Rahimpour said that Iran International TV directed its employees to conduct television interviews only with leaders of the anti-regime parties in Iran. She also said, “The countries of the region do not want a democratic Iran.”

The reformist movement in Iran

With the start of the protests, the reformist leaders have made convergent statements about the country’s sociopolitical conditions. On October 26, Daesh (ISIS) carried out a terrorist attack on a religious shrine in the Iranian city of Shiraz with a gunman killing at least 15 people. A day after this attack, reformist leader Mohammad Khatami indicated that “the demand for a dignified, safe, and just life is a natural demand.

If people find that these conditions are not present, they have the right to criticize and protest.” However, Khatami emphasized that “criticism and protest must negate violence and not be tainted by it, especially in situations where Iran’s enemies abroad have false hope through inhumane weapons, such as sanctions or encouraging violence to exploit the pure blood of the country’s youth.”

Furthermore, the Iranian Reform Front called on the authorities to organize a referendum to end the crisis. It demanded “immediate, courageous, and innovative changes” in order to open an effective nationwide dialogue.

Several reform movements have appeared in Iran since the victory of the revolution in 1979. These movements differ in their religious and ideological orientations, but in general they demand sweeping changes in several venues, especially in regards to individual freedoms and breaking the unquestionable ascendancy of the Shiite clergy in political decision-making processes.

As this report is being penned, Iranian protestors still continue their protests, set symbolic places on fire such as Ayatollah Khomeini’s ancestral home in Khomein, burn their hijabs at railway stations, and chant slogans in the streets.

Omar Awad received a B.A in Journalism and Media Communications. His areas of interest are Middle East politics, soft power and media studies.