Will the Protests Open the Path to a Regime Change in Iran? 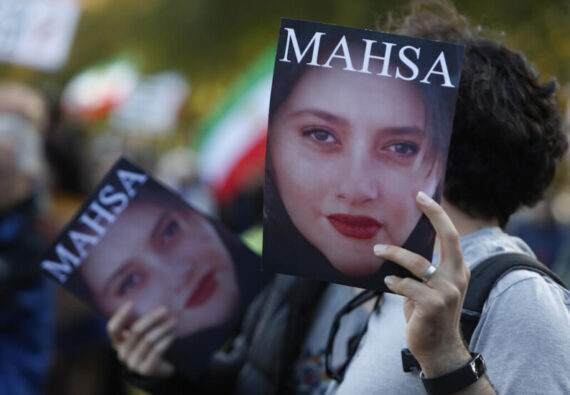 People holding banners gather during a protest over the death of Mahsa Amini, 22, who died in police custody for not wearing her hijab properly, in Amsterdam, Netherlands, on October 08, 2022. Photo by Anadolu Images

n September 16, widespread protests erupted in Iran following the death in custody of 22-year-old Iranian Mahsa Amini. Protests continue to shake the country with Iranian security forces suppressing the demonstrations with brutal force. Thus far, clashes between protestors and the Iranian security forces have seen around 200 people killed. On October 2, police stormed Tehran’s Sharif University of Technology, arresting many students and causing a stir among young, educated Iranians and academia around the world.

Protests spread from universities to high schools where students, especially female ones, organize demonstrations. In the streets, women are taking off their hijabs to challenge the foundational ground of the system (nizam). Protestors target the system’s most fundamental symbols with slogans such as “Death to the dictator” and “No to the Islamic Republic” being chanted to demand regime change in Iran.

As a response to the protests, police and Basij militias use excessive force, and as a precaution, the political authorities have severely restricted the internet inside the country. Protestors use social media along with people who support the protests to disseminate information and videos calling on more people to participate.

The motives behind the protests

Mahsa Amini was detained by the morality police on September 13 for not wearing the hijab properly. Three days later, Amini’s death while in custody was announced. Thereupon, protests started and especially women took to the streets. The slogan “Women, Life, Freedom” marked the protests and became a symbol of women’s struggles.

In fact, the hijab code is not a new development. In Iran, women are required to wear the hijab in public since 1983. But President Raisi’s conservative policy combined with Iran’s chronic problems caused social unrest to grow.

Read: Change Is Inevitable in Iran: How the Four-Decade-Old System Has Become Outdated

In July, Iranian President Ebrahim Raisi issued an order requiring the strict enforcement of the hijab dress code in all public institutions and streets. This move put further pressure on Iranian women and Mahsa Amini’s death in custody ignited the protests.

Although the protests started against the state domination over the female body, there are various motives, such as economic problems, at play. Since U.S. President Donald Trump’s withdrawal from the nuclear deal in 2018, Iran’s economy has been hit by western sanctions. The Iranian economy further deteriorated due to COVID-19 and global economic problems.

In the last couple of years, there has also been growing skepticism toward the Iranian political system and elites. The latest parliamentary elections in 2020 and presidential elections in 2022 witnessed the lowest turnouts since the Islamic revolution in 1979, and the political elite of the Iranian regime turned a deaf ear to this strong message.

Such insensitiveness has always had a potential to cause protests to become more violent. Iranians, who think that their voices are not heard, resort to non-political means. Despite these warnings, the Raisi government continues to neglect the protestors’ discontent with the Iranian state and political system.

Iran is no stranger to mass protests. After Ahmadinejad’s election as president in 2009, tens of thousands of people participated in protests which lasted for months. In 2017, 2018, and 2019, protests shook the country. But the current protests are different in certain respects as they are distinguished by the spread of the protest wave to the whole country, the high death toll in a short time, and an ideologically motivated, direct opposition to the current political system. Another important aspect is that the protests have spread to regions inhabited by ethnic groups, especially Kurds and Baloch, that are spots of intense conflicts.

The response of the Iranian political elite

The Iranian authorities blame foreign powers for the protests and condescend to the protestors. President Raisi claimed the protests were part of a plot to destabilize the country, while Supreme Leader Ali Khamenei accused the United States and Israel of orchestrating the demonstrations.

However, reading between the lines reveals that the Iranian authorities could not ignore the protests, no matter how much they wanted to. In the same speech, Khamenei appeared to admit that the hijab rule does not work, claiming that the majority of Iranian women, who do not observe the hijab code properly, actually support the regime.

In another speech, President Raisi said that some adjustments could be made in implementing the hijab rule. Iran’s Judiciary Chief Gholam-Hossein Mohseni Ejei, in contrast to his hardline stance,  spoke about the need for a dialogue between the government and protesters. These statements indicate that the initial responses of Iranian officials didn’t work, and the Iranian regime may have to show some flexibility. However, it is doubtful whether this flexibility can end the protests.

Several international actors and states have spoken out in response to the protests in Iran. Among western countries, the United States has been the most involved in the Iranian protests. The U.S. has sanctioned a number of high-ranking Iranian officials for their alleged involvement in Mahsa Amini’s death.

After the Iranian government blocked internet access amid ongoing protests, CIA Director Bill Burns stated that the U.S. is committed to supporting the “free flow of information.” White House National Security Advisor Jake Sullivan said that the U.S. supports “brave protestors taking a stand for justice for #MahsaAmini, and condemned the brutal and violent repression they are facing.”

European countries did not remain silent about the protests in Iran either. On September 26, the German Foreign Ministry stated on Twitter, “We call on the Iranian authorities to allow peaceful protests and to not deploy further violence.” In her statement, European Parliament President Roberta Metsola stated, “Women. Life. Liberty. Three words that have become a rallying cry for all those standing up for equality, for dignity, and for freedom in Iran.” Metsola emphasized the European Parliament’s support for Iranian women.

The UK has also taken some steps regarding the protests in Iran. On October 10, Iran’s morality police and senior security and political figures were sanctioned by the UK. “These sanctions send a clear message to the Iranian authorities—we will hold you to account for your repression of women and girls and for the shocking violence you have inflicted on your own people,” said UK Foreign Secretary James Cleverly.

Furthermore, while Elon Musk said that he activated Starlink satellites to provide internet access to the protesters, Google stated that they support protestors. In addition, human rights activists and celebrities worldwide such as Angela Davis, Joan Baez, Juliette Binoche, Angelina Jolie, and Bella Hadid expressed their support for Iranian women. The fact that the struggle for women’s rights steers the Iranian protests may be the most crucial factor in winning global support.

Not unexpectedly, foreign powers do their best to exploit this situation for their political goals. The head of the CIA has said they are supporting the protesters in Iran. But the grievances that gave rise to the protests are the consequences of Iran’s internal problems that Iranians have been complaining about for decades.

Read: Why Is It So Hard to Reach a New Nuclear Deal with Iran?

Iran observers began to make frequent claims that the protests were leading to a political revolution. However, for a revolution to occur in Iran, certain conditions, which do not currently appear, must be met. First and foremost, the protests lack leadership. There is no charismatic leader, nor an elite council, party, or organization to guide the public fury and action. Second, each ethnic group involved in the protests has its own agenda and political demands. Furthermore, there is no prescription to reconcile these demands and turn them into unified political action.

Third, as in the Iranian Islamic Revolution in 1979 and the Arab Spring in 2011, the military plays a significant role. For a revolution to succeed, the military must either remain neutral or side with the protestors. However, there is no indication that this is the case. In some videos images show security forces joining protesters, indicating that the police are accompanying the protesters for security reasons.

Finally, for a revolution to take place, there must be nationwide general strikes. Strikes in the oil sector, which is the backbone of the Iranian economy, in particular, may pave the way for a revolution. There have been some developments in this direction; however, these strikes have not yet spread across the country, and it is unclear how long they will last.

Read: The Tehran Summit: What Is Next for Turkey, Russia, and Iran?

What is next for Iran?

The protests pose a threat to Iran’s establishment and shake the foundations of the system’s legitimacy. This is not ignorable because each new wave of protest turns more violent, lasts longer, and becomes more widespread.

The political elite can no longer overlook such events. They can’t just express their disdain and shut their eyes to the public’s outpouring rage, which needs serious reconsideration.

The political establishment in Iran must act quickly because if steps are not taken in a timely fashion, they may not be able to control the events. The exact threshold is difficult to define, and social movements have a tendency to get out of control, take unpredictable paths, and produce unexpected outcomes.

Also Read
China and the Middle East: Is Turkey a Gateway for a New Political Alliance?