The Queen’s passing was widely discussed on social media with popular Muslim YouTubers discussing the positive things Charles has said about Islam. 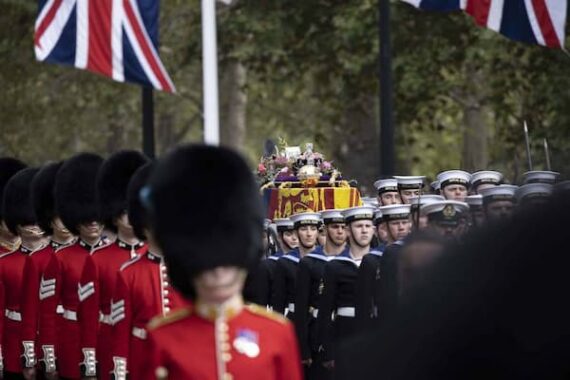 Queen Elizabeth II lived a remarkably long life and was the longest reigning monarch in the history of the country. She was considered as a symbol of stability, service and embodiment of Britishness. Her passing is a rare historic moment and while many are mourning her departure, this event has also resurfaced grievances among people in the U.K.’s former colonies as well as generating critical reactions domestically.

The death and legacy of the Queen prompted a number of national and local British Muslim organizations to offer their condolences and tributes. Well known scholar Abdal Hakim Murad devoted a Friday sermon at Cambridge Mosque to the subject of kingship, Islam and the implications of the current King being sympathetic to Islam. The Queen’s passing was widely discussed on social media with popular Muslim YouTubers such as Paul Williams discussing the positive things Charles has said about Islam.

The National Anthem was even sung in Regents Park mosque to mark the accession of the new King. Some Muslims are convinced that Charles is a secret Muslim and others have made the dubious claim that the Queen was a descendent of the Prophet. London-based researcher Muhammad Ahmedullah told Politics Today, “The idea that the symbol of British power, the Queen and the Monarchy, could somehow be related to and descendant from the founder of Islam can be deeply comforting for people experiencing powerlessness and lacking the intellectual, creative and critical tools to confront their predicament head on without relying on mythical reassurances.”

Muslims growing up in Britain in the1970s and 1980s, appear to be more sympathetic to the deceased monarch and have affection for her as an individual. They could be described as “Queenist,” while not necessarily being Monarchist. Amir Suleman, a media professional from Peterborough, noted to Politics Today he experienced a sense of personal loss, adding “The more I digest her passing, I only now begin to realise how important she was to me personally. She was always ‘there’… It was just normal to always have the Queen. I’m 48 years old and she was, like most, the only monarch we’ve ever had and there are many memories associated with her.”

For political commentator Sami Hamdi, the experience of living in a Britain with its freedoms and opportunities made him appreciate what the late monarch represented “I cannot lie… A deep sadness grips me for a Queen who (for me) was the powerful symbol of the stability of the refuge and sanctuary in which I was born and raised (and which was not, and is not, afforded to my family elsewhere),”he said to Politics Today.

Attitudes are changing, nearly a third of the public, most of whom are young people, want to abolish the monarchy, some polls suggest that less than 40 percent of people from minorities  favour keeping the institution. Underlying this sentiment is the view that the Royal Family is symbolic of privilege and inequality and the fact that the ancestors of the U.K.’s Muslims lived and died under British colonialism. The contemporary legacies of the British Empire can be seen in Africa and the Middle East and this history continues to contaminate relations between India and Pakistan in relationship to Kashmir, in addition to ongoing reverberations of Her Majesty’s Government’s mass exploitation of Indian natural resources.

Though the Queen was not personally responsible for these events – she was always silent on these matters.  Her defenders will argue that she had no political power, however, this narrative is difficult to maintain when considering evidence that indicates that she lobbied for changes in the law to hide her private wealth and that the Royals vetted more than a thousand laws through the mechanism of the Queen’s consent.

The extraordinary queuing to pay last respects to the Queen have been interpreted and exploited in a way that equates feelings of sadness about her death with joy at the unquestioned accession of Charles. Loyalty to the Crown is an implied aspect of British identity.

As Afroze F Zaidi has argued, citizenship has become conditional, for Muslim Britons in light of the U.K.’s counter-terror policy, Prevent. A recent report by the Institute of Race Relations shows that British Muslims have their citizenship reduced to “second-class” status and analysis of government data by the Muslim Council of Britain indicates that around 50% of Muslims live in poverty. This is at time when the new King has inherited his mother’s vast wealth while the public will be forced to continue subsidising their lifestyles to the tune of $33 million in the next two years.

Charles to his credit, has has a long track record of supporting charitable  causes such as the Prince’s Trust  and is  patron of the Oxford Centre for Islamic Studies, where he gave his famous 1993 speech on “Islam and the West“.  According to the author of “Charles At Seventy: Thoughts, Hopes and Dreams“, Charles opposed the Iraq war, disagreed with the burqas and niqab bans in Europe,  told ministers he has  sympathy for the Palestinians and studies the Quran. In a recent speech to faith leaders in Buckingham Palace, King Charles spoke of his personal duty:

“…to protect the diversity of our country, including by protecting the space for faith itself and its practice through the religions, cultures, traditions and beliefs to which our hearts and minds direct us as individuals.”

However, community historian Yahya Birt cautions British Muslims, “…not to be easily charmed by Charles and rush unthinkingly for the photo, career and funding opportunities and the imperial gongs at the crowning of a new Islamophilic monarch.”

Over the last decade, Charles has had 95 meetings in the Middle East and eight were with repressive monarchies. Many of these occurred just before or after  acts of repression against opposition activists, the media or religious minorities and he has played a key role in promoting £14.5-billion worth of UK arms exports to these. The arrests of protesters questioning his right to being King are not encouraging sign for a country that prides itself on the right to free speech.

Also, cancelling hospital appointments and closing food banks on the date of the funeral of the Queen are not the best way to generate good among those in difficult circumstances. As Zara Mohammed, Secretary General of the Muslim Council of Britain notes, “The reign of King Charles III, will force Britain to enter a period where difficult conversations on history, the past and the future direction of the country need to be had.”

He has become Head of State of 14 countries in addition to the UK. Some of them have already signalled that they want to become Republics, while staying as Commonwealth members. How will he navigate this and the legacies of colonialism? Will he make the Royal Family more relevant and accountable to the concerns of all British people?

Can his enthusiasm for Islam and Multiculturalism pacify the current government which is in denial about its institutional Islamophobia? Britain certainly could do with a figure head that brings communities together, who could help heal the ever widening social divides on the basis of race, religion, class and work for a more equitable society. It remains to be seen if the new monarch can play this role.

Sadek Hamid is author of Sufis, Salafis and Islamists: The Contested Ground of British Islamic Activism and co-author of British Muslims: New Directions in Islamic Thought, Creativity and Activism.