Bamenga was selected by the Dutch border police for a passport check as according to the officials his appearance matched the risk profile of a “Nigerian money smuggler.” Latife Özdemir of Politics Today interviewed Bamenga – you can read the full interview here. 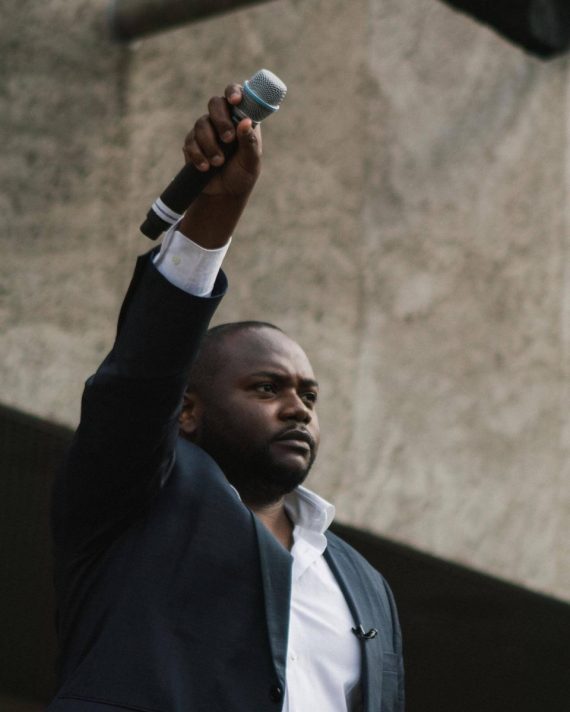 Mpanzu Bamenga is a municipal councilor in the Dutch city of Eindhoven. Photo provided by Bamenga.

Mpanzu Bamenga was eight years old when in 1994, he fled from the Congo to the Netherlands with his mother and older brother. Today, he is a municipal councilor in the Dutch city of Eindhoven and a passionate advocate for human rights. In 2016, he was elected the “Political Talent of the Year” as a councilor in the city of Eindhoven. In 2018, Bamenga arrived at the airport of his Dutch hometown after having lectured on human rights in Italy. He was selected by the border police for a passport check as according to the officials his appearance matched the risk profile of a “Nigerian money smuggler.” Latife Özdemir of Politics Today interviewed Bamenga – you can read the full interview here.

Q. What is racial profiling, and should people worry about it?

Racial profiling is a forbidden form of discrimination by the government. Yes, it is something people should worry about because racial profiling comes from the idea that someone can be judged based on their skin color, ethnicity, or nationality instead of this person’s character. It is also against the fundamental right of being treated equally. It is against human rights. It threatens what we stand for and who we are as human beings.

Q. Not long ago, we were discussing racial profiling in the Unites States, but nowadays it seems that the issue also started to appear in the Netherlands as for example in the cases of Mitch Henriquez and the 17-year-old Rishi Chandrikasing, who was fatally shot by the police in 2012. Is racial profiling of Black people and citizens with an immigrant background becoming widespread in the Netherlands?

I think that racial profiling has always been there. To fight against something, you should first make it visible. It has always been hidden. It’s been brought to light – this is a step to fight against racial profiling. The first anti-discrimination bureaus in the Netherlands were opened 30 years ago. They basically started after situations of racism. It is widespread, not only in practice but also in policy. It is institutionalized in our society and to fight against it, we should address it. It is also part of implicit biases, and we act upon it, which is wrong because it can be contrary to one’s beliefs and values. But it is even worse if you act upon it and you are an official of the government.

Q. Do you think that the situation regarding racial profiling increased after events such as 9/11 for example?

I think that these kinds of events are used as a justification. For instance, now we have people coming from several countries, Syria, Afghanistan, etc. And now we are using it as a justification to say “We have to stop illegal migration, so how can we stop it if we are not able to control passports?” Well, ethnic profiling doesn’t mean that the border police can’t control passports – they can. But the question is “How do they do this?” Do they look at someone’s skin color and assume that this person must be from Syria, Afghanistan, or Africa? Or thinking that someone must be a money smuggler, a criminal, or a terrorist based on someone’s color? This is forbidden and against human rights.

Q. You experienced a racial profiling situation three years ago, how did you feel at the time?

It is very humiliating, and it also stigmatizes because it fits within the idea that the person who is stopped is a non-white person, so there must be, or there could be, something wrong. – It fits into stigmatization, which has consequences in society. For instance, when a young person wants to apply for an internship and the employee just looks at the name (Mohammed) and that person doesn’t even get the opportunity to present themselves or to get an internship at an organization.

This is a very big issue in the Netherlands. We have a lot of labor market and housing discrimination.

This is a very big issue in the Netherlands. We have a lot of labor market and housing discrimination. There are a lot of things going on here when it comes to the idea that when someone comes from a different country, this must be “wrong.” People are not judged by their character but by certain characteristics which you can’t change. It also shouldn’t matter what your religion or your skin color is. What they do is dehumanizing and humiliating if you are the victim.

Q. Foreigners, people of color, and citizens with an immigrant background may be growingly considered potential threats. Is there any substantial, convincing evidence that shows a link between criminality and ethnic background? If not, then, is it merely a sensitivity created around ethnicity-based threat perception in order to nurture a fabricated sense of national security and national threat?

To say that there is a link between color and criminalization is wrong. Criminality was there before any non-white person entered the country. This is not something where there is any kind of monopoly on any skin color. That is being ignorant.

Q. Okay, but those who carry out racial profiling, for instance, have typical arguments and there might be statistics of certain minorities in the Netherlands which might be more active than native Dutch people when it comes to criminal activities. Is there an explanation for this?

Firstly, the root causes of criminal behavior should always be found. If the causes are poverty and low-quality education, we realize that certain groups in society are lacking possibilities, then that is the cause. It is not because someone has a Moroccan background or is from any other country. They should fight the root causes of criminal behavior because ethnicity doesn’t matter. Biologically race does not exist, we are all part of one race and that is the human race. 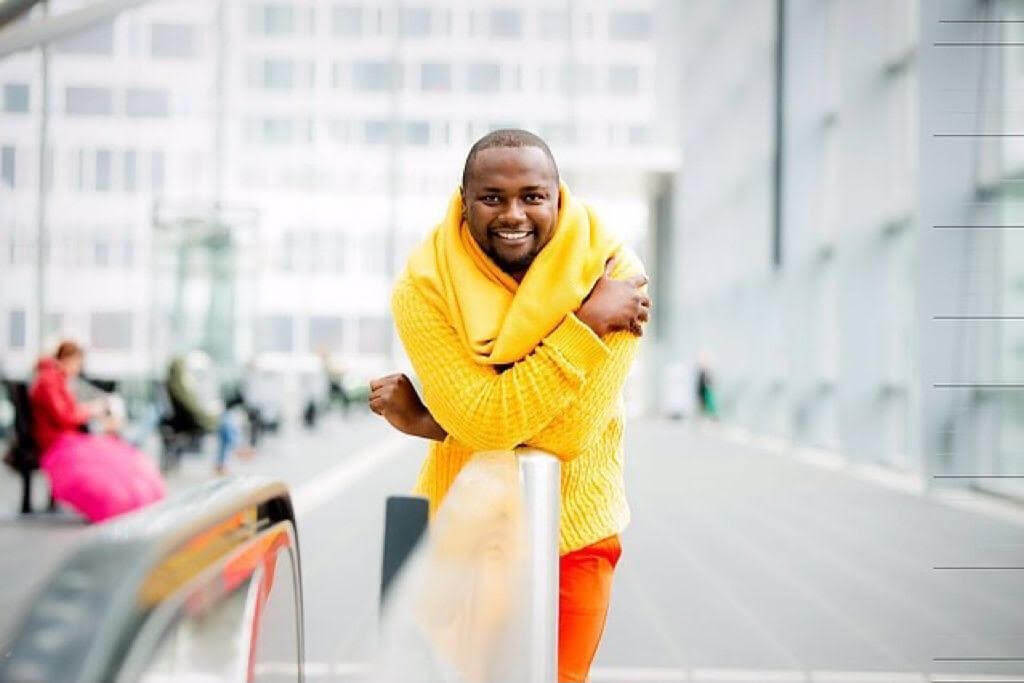 In 2018, Bamenga arrived at the airport of his Dutch hometown after having lectured on human rights in Italy. He was selected by the border police for a passport check. Photo provided by Mpanzu Bamenga.

Q. What are the legal mechanisms to face racial profiling?

Q. What are your thoughts regarding the decision of the court in your case?

The decision was not what we expected. Even though we know racial profiling is instituted, it is still a shock to hear the judge basically mentioning that it is all fine for the border police to stop someone also based on his or her skin color. It is pretty shocking that the law justifies this.  Still, our legal system gives us the possibility to go to a higher court. Especially in this case, when we talk about a fundamental issue, it is crucial and necessary to go to a higher court.

We started a petition which says “My color doesn’t say anything about my Dutch citizenship.”

Q. The decision at the higher court will be in nine months. What are you going to do until then? Are you planning to raise more awareness or to carry out any other activities?

Yes, we started a petition which says “My color doesn’t say anything about my Dutch citizenship.” We hope that we will get support and as many people as possible will sign it. I am sure that we already achieved more awareness, and that more and more people will understand what it is about and why racial profiling should be forbidden in the Netherlands. I hope the court will decide that ethnicity can never be a part of profiling,when there is no concrete suspect.

Q. As the municipal councilor in Eindhoven, what do you think about the house of representatives’ stance when it comes to racial profiling? Some argue that it’s passive. Do you agree?

At this moment, the judgement is still in the courts’ hands so the parliament must be careful about how to intervene. Therefore, I understand that some members of the parliament are hesitant to act at this point. But at the same time, a legal procedure can take up to six years, while the government is the executive body and parliament the legislative body, they can change this discriminatory situation tomorrow if they want. They don’t need a court decision for that.

Q. Do you think that the profiling and surveillance of people will become a bigger issue in Western democracies?

As long as we don’t fight racial profiling, it could be. It is simply a stupid idea to stop someone according to their looks or ethnicity. I believe that more awareness seems to be important, and especially having a mixed environment in education. We should do more in the field of education.

Q. You said during a speech three years ago that you still believe in a world which is just, inclusive, and where everyone is treated equally. Is the gap between the current situation and the ideal widening? If yes, is there still hope to achieve the world you talk about?

Of course, I believe in it with all my heart. I’m very positive and I believe that we are making important steps, and that we are in a final moment to change the world for the better. I think it is important to mention the words of Martin Luther King, “Injustice anywhere is a threat to justice everywhere.” This means that even though you are in a good situation you should think and care about other events happening in the world.