3,150 hate crimes took place in Sweden in 2020 alone, which indicates the direction the country has taken. 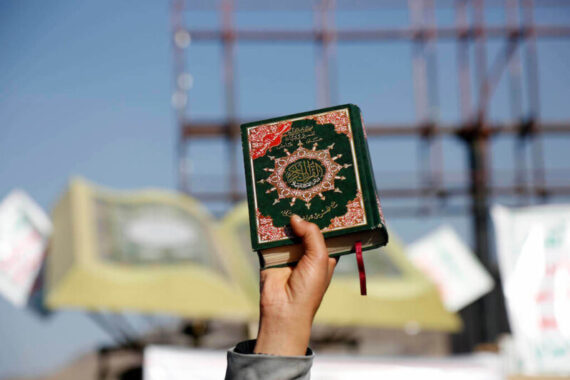 The burning of the Holy Qur'an has drawn reactions from different parts of the Muslim world. Photo by Anadolu Images.

What distinguishes the attack against the Qur’an in Sweden from other hate crimes?

First and foremost, this attack must not be treated as a random hate crime by an isolated individual. That is because Rasmus Paludan, a Danish politician who chairs the Stram Kurs (Hard Line) party in Sweden, carried out the attack, and the courts have already established that Paludan, who also has Swedish citizenship, is a racist. In 2020, he received a prison sentence in Denmark and was disbarred. Paludan’s acts of provocation have consistently been placing Muslims in Sweden and Denmark at risk. The Swedish police continues to protect the politician despite the fact that since 2017 he has committed hate crimes against Islam and undermined public order. The situation is only made more severe as these attacks have been perpetrated by a collective/political movement, have become international, and have been defended by government officials.

How do Swedish officials approach the latest attack on the Qur’an?

Last year, citing freedom of expression, the Swedish police and justice minister allowed Paludan to burn the Qur’an during the holy month of Ramadan, despite objections from the country’s Muslim minority, which constitutes approximately 8 percent of the population, and Muslim countries. Something similar occurred within the framework of the most recent attack. Despite Turkey’s warnings, Paludan burned the Qur’an near the Turkish Embassy in Stockholm with the Swedish police’s permission. In a written statement, the Swedish police stressed the importance of freedom of expression and assembly. However, an important point that Swedish and other European officials who share the same view seem to miss is that such racist behavior has hijacked the political mainstream which has been for the most part ignored.

Read: How Islamophobia Is Leading to a Teacher Shortage in Belgium

Why do hateful and insulting statements and acts, which target sacred values, not qualify as free speech?

Like many other rights and liberties, neither the freedom of expression nor the freedom of assembly are unlimited in modern democracies. One cannot enjoy such liberties in a way that violates the rights of others or undermines public order. Indeed, Article 19 of the United Nations International Covenant on Civil and Political Rights (1966) stipulates that freedom of expression may be subject to certain restrictions to ensure respect for the rights or reputation of others, or for the protection of national security, public order, public health, or morals. Moreover, Article 20 takes a more authoritative step by stating that “any advocacy of national, racial or religious hatred that constitutes incitement to discrimination, hostility or violence shall be prohibited by law.”

The European Convention on Human Rights (ECHR) features a similar regulation. Accordingly, Article 10 of the convention stipulates that freedom of expression “may be subject to such formalities, conditions, restrictions or penalties as are prescribed by law and are necessary in a democratic society, in the interests of national security, territorial integrity or public safety, for the prevention of disorder and crime [and] for the protection of the reputation or rights of others.” The United Nations International Convention on the Elimination of All Forms of Racial Discrimination (ICERD) also prohibits racist propaganda and activities.

Likewise, the European Commission for Democracy through Law (Venice Commission) stresses that hate crimes and the incitement of discrimination must be punished. Accordingly, the commission argues that such punishment would send a strong signal to all social groups that democracy does not condone any action that violates its fundamental values, including tolerance, respect for human rights, pluralism, and non-discrimination.

Freedom of expression is undoubtedly a sine qua non of liberal democracy. However, it is unacceptable for the freedom of expression to jeopardize pluralism, a fundamental goal of democracy, and peaceful co-existence. That is exactly why international norms include reasons for its restriction. It goes without saying that the true purpose of insults and attacks against Islam’s values, such as the burning of the Qur’an and defamation of Prophet Muhammad, is to target European Muslims and, by extension, pluralistic societies.

Is Sweden’s position in line with international human rights laws?

Sweden is a party to the conventions of the United Nations and the Council of Europe that have been mentioned above. Accordingly, Sweden’s decision to allow Paludan, who was convicted of undermining public order in his country last year, to engage in the same act of provocation represents an abuse of freedom of expression, and violates the rights and liberties of others and undermines public order. In this regard, Sweden’s position is not in line with its commitments under international law. At the same time, such attacks, which promote discrimination and target multiculturalism and tolerance, also place Swedish democracy at risk.

Indeed, the European Commission against Racism and Intolerance (ECRI), in its General Policy Recommendations Nos. 5 and 15, asked all member states, including Sweden, to combat and discourage hate speech in light of concerns over racist attacks and hate crimes targeting Islam. It is obvious that hurling insults at the Qur’an lays the groundwork for racist/discriminatory attacks against Muslims and aims to provoke Muslims. Consequently, permitting Paluden’s actions despite the severe and present danger they pose to public order represents a violation of international human rights laws.

What does the European Court of Human Rights’ 2018 ruling mean for attacks against religious values?

On October 25, 2018, the European Court of Human Rights (ECtHR) ruled in E.S. v. Austria that insulting sacred values was not covered by freedom of expression, citing the possibility of inciting religious intolerance. The court also held that imposing a ban on acts like the most recent attack in Sweden, which involved harassment against religious values, was legitimate and necessary for upholding a democratic public order. Moreover, the court agreed with the local courts in Austria that the defendant’s statements regarding Prophet Muhammad amounted to “harassment,” rightfully fueled anger among Muslims, and placed religious peace at risk by promoting prejudice.

All in all, the ECtHR ruling establishes that Sweden’s reference to freedom of expression cannot be considered lawful. In this sense, it is necessary for the Swedish authorities to overhaul their national laws and practives to prevent the abuse of freedom of expression in a way that threatens to eliminate the culture of tolerance and social pluralism and to undermine public order.

The Swedish government’s approach is not in line with the country’s domestic laws either, since the Swedish Constitution requires public institutions to combat religious discrimination. Moreover, individuals who humiliate a social group based on their religious beliefs and incite others against that religious community can be sentenced to up to four years in prison under the Swedish penal code.

According to official data, 3,150 hate crimes took place in Sweden in 2020 alone. The weak response of Sweden’s public institutions to the rise of Islamophobia and hate crimes, together with their failure to enforce international and national laws, is deeply worrying.

Mert H. Akgün is a law and human rights researcher at the SETA Foundation. He got his Bachelor's degree from Ankara University, Faculty of Law. He completed his Master’s degree at Hacettepe University, Department of Public Law, with his thesis titled “The Parliament’s Tools for Supervising the Executive Body after the 2017 Constitutional Amendments”. He is doing Ph.D. at Public Law at Ankara Hacı Bayram Veli University. His research interests include forms of government, democratization, new constitution studies, legislative activities, judicial reforms, and human rights.