Egypt recently announced that it would hold tender for hydrocarbon exploration efforts in the Eastern Mediterranean, acknowledging the exclusive economic zone that Turkey demarcated. 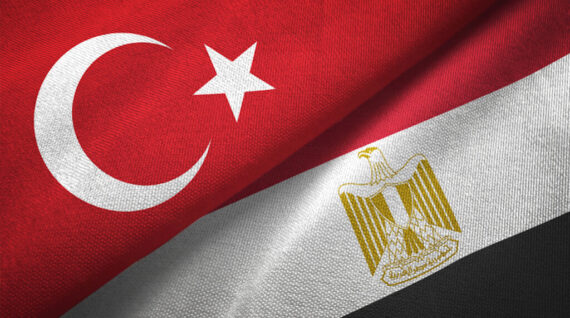 Turkey and Egypt's flags. The two countries are in talk to mend relations. Photo via Getty Images.

To understand how deep political differences between Turkey and Egypt are at the moment, one need not look further than the different reactions to the “four-finger salute” or Rabia sign in both countries. In Egypt, this gesture is treated as a political symbol of the Muslim Brotherhood and the opposition to the current Egyptian government.

In Turkey, it brings to mind then Prime Minister Recep Tayyip Erdoğan’s gesture in 2013 to express his opposition to the military coup in Egypt and his support to the democratically elected late President Mohamed Morsi.

The hand salute became a symbol of the breaking down of diplomatic relations between Egypt and Turkey in 2013, after Egyptian President Morsi was ousted by a military coup. Since then, cold diplomatic showdowns left their place to bilateral hostility and resulted in the two countries expelling each other’s ambassadors.

Politically, President Erdoğan made use of many platforms to criticize the undemocratic government in Egypt while the Egyptian government issued several statements targeting the Turkish government. Egypt also criticized Turkey for hosting members of the Muslim Brotherhood who fled Egypt due to political persecution. 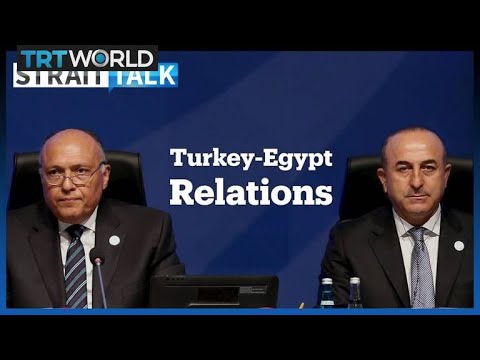 Turkey and Egypt became rivals in the region following the 2013 diplomatic standoff. When the Libyan civil war broke out, Egypt supported the Libyan National Army led by Khalifa Haftar, while Turkey backed the UN-recognized Government of National Accord in Tripoli. In the ongoing Eastern Mediterranean conflict over natural gas and maritime borders, Egypt supported Greek Cyprus against Turkey.

Egypt is considered a regional power in the Middle East and the Arab world, while Turkey is regarded as a role model for Muslim democracy in the region.

When Egypt discovered natural gas fields in the Mediterranean, it chose to cooperate with the Greek Cypriot administration. This cooperation would enhance, it was thought, the Egyptian economy, but it adversely affected Egypt’s already deteriorating relations with Turkey.

Egypt is considered a regional power in the Middle East and the Arab world, while Turkey is regarded as a role model for Muslim democracy in the region. Turkey’s increased involvement in the Middle East has had wider implications for the country. According to a report by the UNHCR in October 2020, since the beginning of the Syrian civil war, Turkey has hosted approximately 3.6 million Syrian refugees.

In early March 2021, Egypt announced that it would hold a tender for hydrocarbon exploration efforts in the Eastern Mediterranean, acknowledging the exclusive economic zone that Turkey demarcated. This move was welcomed by Ankara. On March 13, 2021, in an interview with Anadolu Agency, Turkey’s Foreign Minister Mevlut Çavuşoğlu announced that steps were taken to resume diplomatic relations between the two countries. He assured that neither country had set preconditions to proceed and in the same interview, he stated, “We have contacts with Egypt both at the intelligence and at the Foreign Ministry levels.”

The Egyptian government did not confirm this statement. An unnamed Egyptian official commented that “there is no such thing as resuming diplomatic contacts.” The official said that Egypt and Turkey have diplomatic ties already at the level of chargé d’affaires.

Egypt criticized Turkey and backed Saudi Crown Prince Mohammed bin Salman, who is widely believed to be behind the brutal murder of Khashoggi.

During the same speech, Çavuşoğlu emphasized Turkey’s interest in mending relations with the United Arab Emirates and the Kingdom of Saudi Arabia, both of which are major supporters of the Sisi regime. It seems that the hostile approach by the UAE towards Turkey results from Turkey’s support for the Muslim Brotherhood – many of its supporters and leaders are based in Turkey, where they broadcast and issue statements, a move that has always angered Egypt.

When Saudi journalist Jamal Khashoggi was murdered by Saudi operatives in Saudi Arabia’s consulate in Istanbul in 2018, Turkey revealed the facts behind the crime to the international public. Egypt criticized Turkey and backed Saudi Crown Prince Mohammed bin Salman, who is widely believed to be behind the brutal murder.

Egypt has always been a loyal ally of Saudi Arabia. In 2015, Egypt supported the Saudi-led coalition in Yemen against the Houthi rebels and boycotted Qatar in 2017 in response to the request by the Saudi-UAE political axis. Saudi Arabia has been a main actor in the Egyptian political and economic scene. Through its economic aid packages to Egypt following the military coup in 2013, Egypt’s foreign policy has come under strong Saudi influence.

Turkey is well aware of Egypt’s political importance in the Middle East. If Turkey and Egypt leave their ideological differences aside, focus on prospects of growth, and reach a reconciliation initially on their economic interests and for the stability in the region, other steps will follow suit. Turkey and Egypt can find common grounds on the Eastern Mediterranean and Libya. If the two countries normalize their relations, Turkey could be a potential importer of Egyptian natural gas through the Mediterranean.

Turkey and Egypt share the historical, centuries-long legacy of the Ottoman Empire. Whether or not they follow their mutual interests, only time can tell. Diplomatic relations between the two can’t be mended with a quick fix and ultimately actions will speak louder than words.

Read: Gulf Regional Rift Mended but Will It Extend to Turkey? 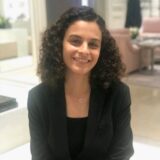