Third parties play an important role in the game and according to Turkey it is not a fair game. 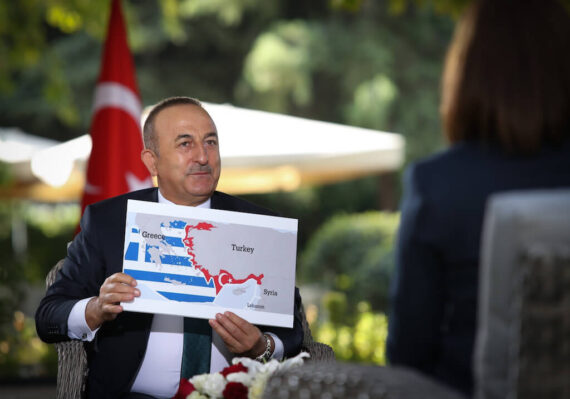 Minister of Foreign Affairs of Turkey, Mevlut Cavusoglu shows a map called the "Seville Map" during a live broadcast of NTV in Ankara, Turkey on September 14, 2020. Photo by Cem Ozdel, Anadolu Images

Turkey and Greece have many differences which gain new dimensions through regional and international incidents. It is a curious question whether there could ever be a path toward a long-term dialogue between the two nations and a sustainable solution to their differences. So far, to promote dialogue and peaceful settlement, third parties such as the EU, the U.S., and NATO have played important roles. Some observers argue that the Greek-Turkish NATO partnership has kept the bilateral problems under control, while others think that the post-World War II order and the U.S. role in Greek-Turkish disputes have worsened the situation.

A number of experts believe the EU still has the potential to push Greece and Turkey to reach a solution and others argue that the EU created further tension and turbulence by recognizing the membership of the Greek Cypriot government as representative of the whole island before a resolution to the conflict had been reached. What is certain, however, is that the role of third parties in Greek-Turkish disagreements will determine to a great extent the success of the bilateral talks. Regional and global actors will play a decisive role in the disputed matters according to their interest definitions or priorities.

Exploratory talks between Turkey and Greece started after a crisis between the two countries at the end of the 1990s. Talks and rapprochement were stimulated when Turkey’s EU initiative for accession was supported by Greece. Turkey and Greece have held 60 rounds of talks over 14 years. However, rivalry in the Eastern Mediterranean turned the Aegean crises into a larger problem premised on the delimitation of maritime borders and especially in relation to the islands near Turkey’s coast.

Bilateral relations deteriorated in the 2010s, not because of the delimitation of the maritime borders, but due to the July 15, 2016 coup attempt in Turkey and the Gülenists who sought refuge in Greece. After the coup attempt, exploratory talks were hindered by Greece’s refusal to extradite the Gülenists to Turkey. Moreover, other regional problems poisoned the bilateral disagreements, such as the Syrian civil war and the flow of immigrants to the Aegean Sea and the region of Evros in Greece.

These new problems are no longer excluded from the agenda of the bilateral relations. Greece continued the EU-ization of Greek foreign policy priorities and Turkey rejected any kind of fait accompli. In this context, Greece’s naval exercises with the inclusion of numerous third actors as a show of strength and Turkey’s exploration ships in the Eastern Mediterranean will be regarded as the continuation of previous problems and are seen as having a multilateral character.

Recently, the most prominent issue in the Eastern Mediterranean has been the drilling activities around the island of Cyprus. Officially, this is out of the frame of exploratory talks between Greece and Turkey, but there is no doubt that the issue of Cyprus has always been poisonous for Greek-Turkish relations. In 2003, the Greek Cypriot leadership signed a maritime deal with Egypt for gas exploration in the Eastern Mediterranean.

The deal aimed to create an Exclusive Economic Zone (EEZ) that complicated the Cyprus problem of how to share sovereignty between Greek and Turkish Cypriots. Greeks belittle the Cyprus problem reducing it to “occupation” in reference to the 1974 Turkish operation on the island after the brutal murders of Turkish Cypriot civilians by the Greek Cypriot militias backed by the Greek military junta with an idea of uniting the island with Greece. The real cause of the problem has been kept hidden: what will the rights of the Turkish Cypriots be?

In the 1960 constitution, Turkish Cypriots had the same rights as Greek Cypriots as constituent citizens of the Republic of Cyprus (RoC). Problems were exacerbated when the Greek side argued that the number of Greek Cypriots were higher than their Turkish counterparts, and therefore Turkish Cypriots should not have equal rights and that this should be addressed by introducing several amendments in the founding constitution.

Read: Search of Turkish Ship on the High Seas Was Illegal

Even today, this argument is still very strong in Greek Cypriot politics. Turkish Cypriots are not considered “Cypriot enough” and are regarded as Anatolian families living in Northern Cyprus. Now, the Greek Cypriots’ international recognition gives them an advantage and legitimacy at the expense of disregarding the rights of Turkish Cypriots based on the 1960 London, Zurich, and Nicosia Agreements. In this sense, this international recognition did not help the quest for a peaceful resolution to the conflict. Despite the efforts by the United Nations and the European Union, negotiations have not reached a solution.

While the Annan Plan gave hope for a probable settlement, the 2002 EU Summit confirmed that the RoC would be a member state without the resolution of the conflict. The Annan Plan’s rejection by Greek Cypriots and the RoC’s membership in the EU as a representative of the entire island took place in the short time frame of two months. Thus, the RoC’s veto of Turkey’s accession process to the EU in 2006 dissolved the exploratory talks’ main stimulator. Mounting economic problems in Greece and Cyprus in 2008 created reluctance to continue the negotiations.

Despite the existence of EU mechanisms, the exclusion of Turkey from all multilateral platforms and a maximalist insistence on using these platforms and mechanisms to achieve Greek national priorities are still the dominant attitudes in the Eastern Mediterranean. This irreconcilable attitude was reflected in the use of maps such as the Seville Map to decide the delimitation of the Exclusive Economic Zone (EEZ) in international summits – a move that triggered Turkey’s reaction.

The most recent example of Greece’s efforts to exclude and marginalize Turkey from international platforms is the Philia Forum.

In 2006, the concept of “Blue Homeland” (Mavi Vatan) which includes Turkey’s EEZ was introduced by Admiral Cem Gürdeniz. With the studies of Turkish Navy Commander Cihat Yaycı, in 2010, the concept became a doctrine (of the Turkish Republic). The first application of Blue Homeland came in 2017 when Turkey started to send seismic exploration ships to the region. The peak in the tensions in Greek-Turkish relations came when Turkey signed a delimitation agreement with Libya on November 28, 2019. Today, Turkey’s Eastern Mediterranean policy depends on the Turkey-Libya EEZ deal that challenges  the Mediterranean Energy Plan of Israel, Cyprus, and Greece.

In 2013, the EastMed pipeline project was designed under the European Commission Regulation without referring to any probable cooperation with Turkey and Turkish Cypriots. This was taken as another sign of how Greece tries to use its EU membership to its national advantage. The most recent example of Greece’s efforts to exclude and marginalize Turkey from international platforms is the Philia Forum. The Greek government aims to utilize Turkey’s tensions with several regional countries in order to delegitimize and minimize Turkey’s rightful demands and rights in the Mediterranean.

As part of this strategy, the Greek government wants to find a solution to the delimitation issue with other neighboring countries such as the agreements with Italy on June 6, and with Egypt on August 6,  2020. The Albanian-Greek EEZ border had several problems despite continuous efforts since 2009. In 2018, the Tsipras government tried to push the negotiations with no success. On October 20, 2020, Albanian and Greek authorities confirmed that they had reached an agreement to take the issue to The Hague.

As a result of the rising tension in the Eastern Mediterranean, NATO Secretary General Jens Stoltenberg took the initiative to reduce the risk of incidents between the Greek and Turkish navies. With the support of Germany, Turkey and Greece resumed exploratory talks in Istanbul on January 26, 2021 with the hope to create a base for bilateral negotiations after months of tensions in the Eastern Mediterranean. After a five-year break, the 61st Round of Exploratory Talks were launched in the hope of supporting the EU efforts to promote a positive agenda in Turkish-EU relations.

Turkish Deputy Foreign Minister Sedat Önal and retired Greek diplomat Pavlos Apostolidis represented their countries at the negotiation table. However, both sides approach each other reluctantly and do not act in good faith. To gain diplomatic benefits, both try to project the image of a peaceful actor towards the international community. Some analysts say diplomats know how to solve the problems in the Aegean Sea while others claim no progress is being made. However, making progress in the exploratory talks is now a matter of a deeper question.

The relations between Greece and Turkey are part of the EU-Turkey relations. Greek officials state it clearly, and believe that the European Union can provide a solid victory for Greece by implementing sanctions against Turkey. On the other hand, Turkey wants a positive agenda – but the question is at what expense. Turkey accuses the EU countries of being unjust but is equally aware that the solution will come through an international meeting which must include all actors in the Eastern Mediterranean. So, the lack of trust and the existence of many different actors with a range of different priorities make the exploratory talks less promising in terms of reaching a comprehensive resolution in the near future.

Third parties play an important role in the game and according to Turkey it is not a fair game. This is the main reason why Turkey is active in the field with military exercises that manifest its decisiveness to preserve its maritime borders. However, the beginning of the exploratory talks shows that both Greece and Turkey do not want to increase the tension further. This creates a motivation to back the dialogue channels. To this day, the only reliable method to solve the existing problems between Turkey and Greece is peaceful negotiations through fair international summits with the participation of all relevant actors.

Zuhal Mert Uzuner is Associate Professor at the Department of Political Science and International Relations and vice-dean of the Faculty of Political Science, Marmara University. She has degrees from Marmara University and Democritus University of Thrace-Greece. Uzuner is an expert on foreign policy making, Greek foreign policy, Turkish foreign policy, Greek Turkish relations, Balkans and Mediterranean politics. She is also author of Ellines kai Tourkoi: Avapofeuktoi Syntrofoin (2016-Epikentro) and editor of Role of Image in Greek Turkish Relations (2018- Peter Lang).