Turkey is heading for a systemic transformation towards the “Presidential Government System” under such difficult global conditions. But it is exactly these difficult conditions that make Turkey’s systemic transition more important and inevitable. 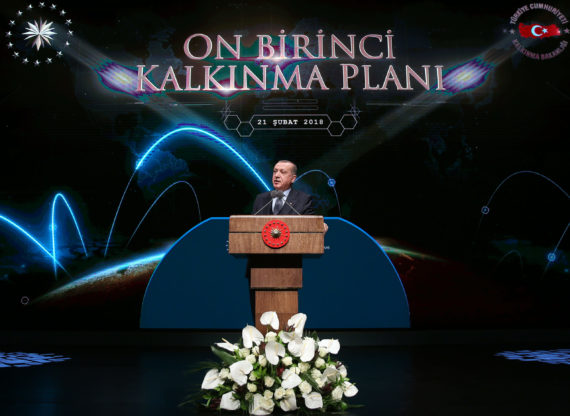 President of Turkey Recep Tayyip Erdogan addresses during Publicity Meeting of the 11th Development Plan at the Bestepe National Congress and Culture Center in Ankara, Turkey on February 21, 2018. Anadolu Images

Since the onset of the global economic crisis political, economic and technological competition among the global and emerging powers acquired increased pace and tenacity. While the U.S., Russia and China experience geo-political tensions with increasing frequency and face the possibility of direct confrontation beyond proxy-wars; liberal economics and free trade approaches rapidly lose their proponents in the world economy.

The political backing behind the liberal international trading system represented by institutions such as the World Trade Organization is fading, while neo-protectionism gains ground along with rising economic nationalism. Triggered by the Trump administration in the U.S. and the rising tide of nationalist/neo-populist parties in Europe and elsewhere, trade wars, currency wars, cyber-space wars, economic sanctions and accusations of technological theft are also increasing.

A fierce conflict for sustained global economic hegemony, or to use Organski’s words, to prevent a “power transition,” openly takes place between the U.S. and China. All these developments constitute crucial challenges for the political and economic authorities of emerging powers and developing countries. There is an ever-increasing pressure on decision-making communities in these countries to monitor global developments closely and formulate effective and timely responses.

Turkey is heading for a systemic transformation towards the “Presidential Government System” under such difficult global conditions. But it is exactly these difficult conditions that make Turkey’s systemic transition more important and inevitable. As such, the systemic reform that will take place in Turkey following the June 24 elections shall be conceptualized not only as a legal and political reform that will restructure the separation of powers among the executive, judiciary and the legislative branches of the government. On the contrary, it should be construed as a structural reform that would transform the macroeconomic governance architecture and socio-economic development strategy with comprehensive institutional changes.

While embarking on major institutional reform in macroeconomic governance, there are several common features that need to be taken into account from the successful development experiences across the globe:

Therefore, Turkey’s initiative for institutional reform shall proceed in a way to enable smooth progress on all these accounts. When we look at the historical record of previous AK Party governments for institutional reform, it is clear that significant reforms were made to institutionalize a “regulatory state” in the first decade of the 2000s. Consequently, fiscal discipline was permanently established and the financial structure became resilient against severe international shocks.

Several institutional reforms in line with the “Post-Washington Consensus” style of prudent financial and macroeconomic regulation were successfully accomplished. Instrumental independence of the Central Bank to conduct monetary policy and autonomy of key regulatory agencies responsible for the supervision of regulation of finance, capital markets and other services were secured. This robust regulatory framework was extremely effective in constraining the negative repercussions of the global economic crisis on Turkey.

But there was one major structural problem with the overall macroeconomic management approach in that it favored the inflow of international funds to sponsor the booming construction, finance and service industries; rather than industrial production and technological know-how.

Over the course of the years following the global economic crisis Turkey tried to realize a paradigmatic transition to a more production and real economy oriented growth model with no avail. In order to precipitate a transition to a more industry-technology and export oriented growth strategy various inventories and reports were prepared, sectorial goals were determined and subsidies were released. Yet the path dependency, which remained from Turkey’s stabilization program during the early 2000s with an emphasis on fiscal discipline and the service sector, could not be broken.

Social and political volatilities from the Gezi Park protests in 2013 to the failed coup on 15 July 2016 also exerted a negative impact on the projected strategic transition. As did the hesitant attitude of the AK Party leadership on taking a leading role for industrial-technological upgrading through public-private partnership schemes since these were seen contrary to the principles of economic liberalism.

When we came to 2018, the global atmosphere concerning strategic public involvement in key industries and neo-protectionism are globally accepted practices and there is a relative sea change in terms of the public-private balances in macroeconomic management. Therefore, the political leadership in Turkey has more leeway to exert strategic activism when it comes to achieving prioritized sectorial growth objectives.

In order to follow global developments leading to the so-called Fourth Industrial Revolution, Turkey needs to radically restructure both the philosophy and institutional manifestations of macroeconomic management in order to keep up with the pace of ever-fastening global competition among global and emerging powers.

Concretely speaking, the following institutional changes could be made in the existing macroeconomic governance architecture: