Walia’s book focuses on the plight of refugees and asylum seekers as they are forced to abandon conflict-ridden countries and homes affected by natural disasters and climate change. 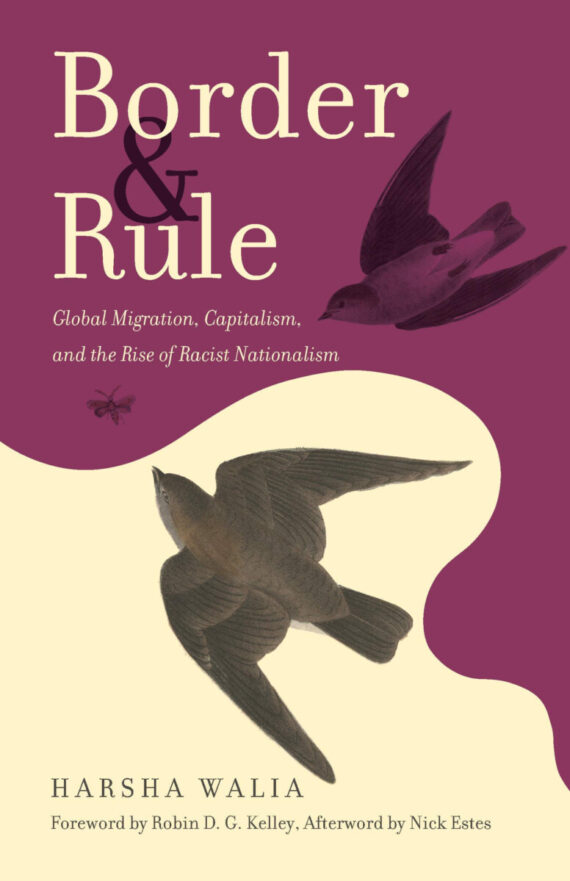 Harsha Walia’s Border and Rule, published by Haymarket Books in 2021, bulldozes through political partisanship to present a critical perspective of both sides, reminding us that the Left and the Right may seem different on the surface, but that paying close attention to the vernacular used by adherents would reveal how they are one and the same, and how embroiled both factions are in looking upon the world and its resources as worthy of exploitation.

Walia directs us to the concerted efforts of not just the US but the rest of the world in their move towards perfecting immigration policy in the optic of ‘displacing, immobilizing, criminalizing, exploiting, and expelling migrants and refugees’. (2) She goes on to point out that the US attracts only 1 percent of the global population of migrants—a fact that may surprise many, given the extensive publicity of how it promotes itself as migrant and refugee-friendly. (160) She believes that border politics should be rephrased in terms of ‘border imperialism’, and encourages moves towards ‘restitution, reparations, and responsibility’, rather than ‘charity and humanitarianism’. (3)

She views ‘anti-migrant xenophobia, immigration enforcement, detention centers, migration controls, and border securitization’ as symptoms of a more fundamental policy at play: ‘the rule of racist, nationalist borders.’ Along these lines, it makes sense that she finally advocates a ‘leftist politics of no borders’ (213) which implies an abolition of the concept of citizenship in order to allow a free movement of people across countries.

Walia’s book focuses on the plight of refugees and asylum seekers as they are forced to abandon conflict-ridden countries and homes affected by natural disasters and climate change.

Walia’s book focuses on the plight of refugees and asylum seekers as they are forced to abandon conflict-ridden countries and homes affected by natural disasters and climate change. She retraces the hardships endured in the course of these travels, commenting especially on the process-burdened entry they face, and eventual acceptance into host countries. But entering the host country is only the beginning of the ordeal of migration, she avers. Delay in issuing work permits or in processing applications for permanent residency or citizenship subjects them in the interim to harsh working and living conditions, as they are turned into an unregulated pool of exploitable manpower.

But there is some respite too, as Walia discusses the success of grassroot level strategies that now allow migrants to be welcomed into countries together with their families, or have even led to the abolition of the live-in requirement for caregivers in countries like Canada. Previously the live-in policy subjected workers to a variety of abuses so that the Filipino Women’s Organisation in Quebec reported how caregivers ‘could not use fans or the internet, lock their rooms, entertain visitors, or leave the home when not working.’ (165-66)

But citizens also turn into refugees and asylum seekers for other reasons than conflict or climate change. Walia broaches the duplicity involved as higher authorities mask their own abuses of power, discussing the history of the US southern border formation where land was seized and citizens turned into ‘illegals’ overnight. This would be more of a case of people not exactly crossing borders, but rather being crossed by them, she says. (23)

The breadth and scope of Walia’s study covers not just first-world countries in their treatment of refugees and asylum seekers, but also bears upon ongoings in the Gulf Cooperation Council (GCC) States, the UAE,  India, Brazil and the Philippines, among others. Walia explains how leaders and capital owners of third-world countries work in cahoots with those of first-world ones to perpetuate a cycle of exploitation: thus in resistance to these policies, the African People’s Land Grab Declaration states, ‘African leaders give foreign countries and companies the most productive land and forcefully remove us, Africans, from our lands.

With our ancestral lands talen away, we become refugees in our own land.’ (71) Moreover Walia explains how the ‘Bidoon’ (a term used in GCC States to mean ‘stateless’), for whom it is quasi impossible to obtain citizenship, are denied the benefits of welfare nationalism and all accompanying political rights, including the ability to own property. In Kuwait, the ‘bidoon’ have been barred since 2012 from participating in marches. (193)

In India, the rise of Hindutva ideology, embraced by Modi and his government, has stoked resentment against Muslim migrants so that among other policies of exclusion, compulsory registration in Assam in the National Register of Citizens (NCR) has turned Muslim Indians of Bengali origin into noncitizens, although they were born and lived there for generations. (159-160)

Walia also explores the effects of the COVID19 pandemic explaining how it provided excuses to tighten border control and impose further injustices on refugees and asylum seekers. Thus the government of Malta abandoned passengers on a boat in its seas so that some of them perished from dehydration and drowning, and later arranged for the remainder to return forcibly to Libya. (11)

Walia also explores the effects of the COVID19 pandemic explaining how it provided excuses to tighten border control and impose further injustices on refugees and asylum seekers.

Moreover in Australia, detained refugees in onshore and offshore centers were among the most vulnerable as they were forced to live in close proximity and many already suffered from health issues. (99) The pandemic also allowed authorities in Lebanon and China to impose stricter regulations on refugees from Syria and Africa respectively, and indulge in discriminatory practices where local citizens were made to adhere to a different set of precautionary rules. (11) In such times, refugees, asylum seekers and/or new migrants were also easily shunned and marked out as ‘vectors of diseases’. (196)

While Walia proposes a solution to remedy the global migration crisis—that is, ‘a leftist politics of no borders’—her war appears to be more ambitious than that. Arguably it may be looked upon as utopian, as she advocates a complete revamp of the capitalist system in place.

‘Empires crumble,’ she says, ‘capitalism is not inevitable, gender is not biology, whiteness is not immutable, prisons are not escapable, and borders are not natural law.’ (215) Her insistence and resilience are both contagious, and it is easy to be drawn by the bigger parentheses of this book that appeal to us to look upon a refugee not as a stranger, an outsider, or chattel, but a human being.

Sabah Carrim has a PhD in Genocide Studies and Prevention with a focus on the Khmer Rouge era. She has also authored two novels, Humeirah and Semi-Apes, and short stories that have been selected and published in various international short story writing competitions. She sits on the Advisory Board of the International Association of Genocide Scholars (IAGS) as Emerging Scholars Representative. Sabah is currently recipient of the W. Morgan and Lou Claire Rose Scholarship for a MFA in Creative Writing in Texas State University in the United States.

Also Read
Calling out the UK: Pushbacks of Asylum Seekers Cannot Be Normalized