Although Vietnam’s arms imports from Russia are on the decline, it still relies on Russia, accounting for around 85% of its total arms imports. 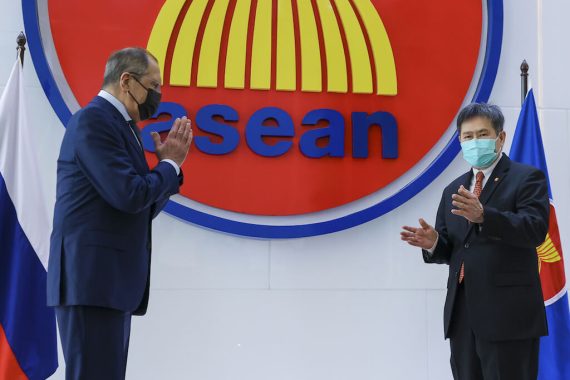 In the past two decades, Russia has become the largest supplier of weapons to Southeast Asia in an attempt to balance China with Russian arms exports to Southeast Asia totaling more than $10.8 billion. What makes Russia a suitable supplier of arms to certain Southeast Asian countries is that it offers cheaper equipment, barter as a payment alternative, and does not consider human rights records unlike Europe and the United States. Nevertheless, there is a decline in the region’s arms imports from Russia, mainly due to the drop of imports by Vietnam, but also a regionwide decrease of arms imports overall.

Although applied selectively, a factor that caused the recent decline of the regional arms trade with Russia is the wariness of sanctions associated with the U.S. Countering America’s Adversaries Through Sanctions Act (CAATSA). However, for countries such as Myanmar which are already criticized by the U.S., or for countries with long-lasting historical ties to Russia, the benefits outweigh the costs.

Myanmar has long been riddled by conflict between armed militias and repressive regimes. The country underwent regime change in February 2021 with a military coup. Russia has since shown support to the junta regime as seen in the participation of Russian officials in the 2021 military ceremony for the Armed Forces Day on March 27; the supply of arms to the junta; and the June 2021 visit of Min Aung Hlaing, the junta leader who is now the prime minister of Myanmar, to Moscow, at the invitation of the Kremlin.

China is Myanmar’s top arms supplier, but it also provides support to armed militia groups along its border, and therefore Russia allows the Myanmar military to balance its reliance on China. According to the Stockholm International Peace Research Institute (SIPRI), over the past 20 years, Myanmar purchased $1.686 billion worth of arms. The arm purchases in the last decade include R-73 air-to-air missiles, BRDM-2 armored vehicles, Yak-130 and Su-30MK aircraft, 57E6 surface-to-air missiles, 96K9 Pantsir-S1 missile systems, and Orlan-10E drones.

Although Vietnam’s arms imports from Russia are on the decline, it still mainly relies on Russia, accounting for around 85% of its total arms imports. In the past 20 years, Russia has sold $6.542 billion worth of weapons to the Southeast Asian country. Apart from a tightening military budget causing the decline, past procurement issues caused by sanctions towards Russia during the annexation of Crimea have pushed Hanoi to attempt to diversify its suppliers.

Following Vietnam, Laos is the second-most reliant country on Russia in terms of arms supplies making up 44% of its total arms imports. Russia and Laos have historical ties since the Cold War era. Between 2018 and 2021, Laos increased its purchase of weapons from Russia, spending $104 million, an outstanding amount considering it spent $130 million in total in the past two decades.

In 2021, Indonesia announced that it had abandoned a 2018 deal with Russia to buy Su-35 fighter jets due to the prolonged acquisition process and fear of U.S. sanctions. Instead it considered U.S.-made F-15EX or French-made Dassault Rafale alternatives, confirmed by recent deals. Indonesia currently seeks to improve its aging military equipment with the Minimum Essential Force plan to maintain its maritime security, being an archipelago nation made up of 17,508 islands.

From 2015 to 2020, there were no reported acquisitions of Russian arms by Indonesia. The most recent deliveries were in 2021 as part of a $170 million deal that included 22 BMP-3 infantry fighting vehicles and 21 BT-3F armored personnel carriers.

Russian arms imports made up 33% of Malaysia’s total arms imports in the past two decades. However, recently, the country does not seem to be interested in buying arms from Russia. Between 2007 and 2013, Russia exported approximately $1.2 billion worth of arms to Malaysia. However, after 2013, there is no reported purchase of Russian arms by Malaysia; the country has been looking to reduce its reliance on Russian arms and seems to be moving further away from Russia even with existing contracts.

The newcomers and infrequent buyers

Cambodia and the Philippines are newcomers to the Russian arms market. Cambodia only recently, in 2021, bought two secondhand Mi-8MT/Mi-17 transport helicopters. The Philippines has sought to modernize its military throughout the years, but has struggled with financial strains. The Philippines is traditionally a U.S. ally and did not buy major weapons from Russia until 2021, despite the fluctuating relations with the U.S. over human rights concerns during President Rodrigo Duterte’s war on drugs. However, it turned to Russia in an effort to diversify its market.

In 2016. the U.S. Senate blocked a sale of 20,000 assault rifles to the Philippines. Russia later donated 5,000 Kalashnikov rifles, 5,000 steel helmets, about a million rounds of rifle ammunition, and 20 army trucks to the country. Russia even offered a “no political condition” weapon production deal in 2019 and started negotiations for selling helicopters and submarines.

The Philippines signed a $249 million contract in November 2021 with Russia to buy 17 Mi-17 transport helicopters projected to be delivered in a little over two years. As for the submarines, the countries have yet to make a decision.

Another potential market for Russia to increase its arms supplies is Thailand. The Royal Thai Armed Forces acquired 10 Mi-8MT/Mi-17 transport helicopters intermittently over the years 2008, 2015, 2018, and 2021. In 2008, they also bought 36 Igla-S portable surface-to-air missiles. Since 2017, Thailand and Russia have seen an increased cooperation with the military-technology collaboration agreement that has been reached between the two countries.

Myanmar, Laos, and Vietnam remain Russia’s most outstanding arms customers in Southeast Asia. Regarding Laos and Myanmar, Russian verbal support of their authoritarian regimes is also observable. While markets such as Indonesia, Cambodia, and the Philippines may pose potential opportunities, the Russian invasion of Ukraine could have detrimental implications on these openings considering the possibility of international backlash on the aforementioned countries.