Central Asian countries are using the cover of official state neutrality to escape the ire of parties involved in the ongoing war. 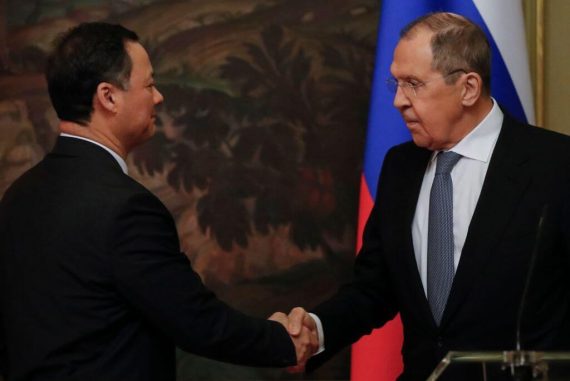 The Haydar Aliyev Centre for Eurasian Studies at Ibn Haldun University in Turkey held a webinar on the impact of the war in Ukraine on Central Asia on March 30, 2022. The webinar included Prof. Luca Anceschi, an expert on Eurasian studies who teaches at the University of Glasgow, UK; Akbota Zholdasbekova, an associate professor at L.N Gumilyov Eurasian National University, Nur-Sultan, Kazakhstan; Emil Dzhuraev, co-founder and fellow at Crossroads-Central Asia, Bishkek, Kyrgyzstan; and Prof. Yaşar Sarı from Ibn Haldun University, Istanbul, Turkey.

Response from state and civil society in Central Asia

Speaking of Turkmenistan’s official position, which is unclear at present on the Russia-Ukraine war, Luca Anceschi noted that Turkmenistan “is a country where war is not debated in the public press. Whatever the news makes internationally, doesn’t make it in Turkmenistan because the government decides what goes and what doesn’t go into the news. The country has been engaged very publicly in the presidential transition as well.”

He added, “This is a very inwards-looking country; it’s a country that only cares about themselves, not because the people are like that but because the regime forced them to do so.”

Read: Where Does Central Asia Stand on Russia’s War in Ukraine?

One can also see the evolution in these neutral positions when countries like Uzbekistan and Kazakhstan have showcased their greater sympathy towards Ukraine. “However, that doesn’t mean an open condemnation of the aggressive actions by Russia,” said Dzhuraev.

While addressing the response of civil society in Kyrgyzstan, Dzhuraev said, “There have been public protests and demonstrations in support of both countries [Russia and Ukraine],” but “there is a lack of information, if not ignorance about what the matter really is” among the people. Because of the strong presence of Russian state-controlled media from which a large part of Kyrgyz population gets their daily news, “there is an urgent need for countries [Kyrgyzstan and Kazakhstan] to consider their information security question.”

Dzhuraev argued there is a prevailing division of allegiance between young and older Kyrgyz. According to Dzhuraev, old generation Kyrgyz are pro-Russian due to the “imprint of many years in close affinity with Russia under the Soviet Union.” He also noted the role of Russia’s “propaganda campaign that has been working successfully with Putin in the center in Kyrgyzstan.”

The young generation and civil society are standing with the cause of Ukraine. Dzhuraev believes the reason that has led young Kyrgyz to side with Ukraine is the nationalist perspective. Dzhuraev argued that the fact that young Kyrgyz favor Ukraine “doesn’t mean that they are siding with the U.S. or the West”—they are doing so because “Ukraine is seen as very similar to Kyrgyzstan.”

The economic impact of the war on Central Asian countries

While addressing the trade relations of Central Asian countries in general and Kazakhstan in particular, Anceschi pointed to the limitation of trade that Bishkek is facing following the Russia-Ukraine war. In his words, “The age of Eurasian globalization as we know it is over.”

Anceschi further noted that “we are not going to have the same amounts of exchanges that we have had so far, mainly because Russia is so big that every kind of exchange we have seen has to go inevitably through Russia.” Hence, “The dynamics that were prevailing in continental Eurasia across the last ten years are gone.”

The biggest worry for Kyrgyzstan is the plight of immigrant laborers working in Russia. According to a World Bank report, Kyrgyzstan and Tajikistan are two of the most migrant-dependent countries in the world. In Kyrgyzstan, remittances were equivalent to 31.3% of the GDP in 2020. In Tajikistan, the figure was 26.7%.

In this regard, Dzhuraev stated that the “lump-sum value of remittances has come down during the COVID19 restrictions to 20%, which is less than normal.” He added that during the Russia-Ukraine crisis, “one could expect even a sharper decline in remittances.” He further stressed the debates which are emerging in Kazakhstan around Kyrgyz migrants in Russia and the fear of their possible recruitment in the war against Ukraine.

A large number of goods that Kyrgyzstan receives from EU markets and other countries apparently come through Russia. Dzhuraev put emphasis on revisiting the “question of whether Kyrgyzstan can refigure its supply routes for imports of essential goods such as medicine, food items, technology, etc.”

Countries in Central Asia are maintaining the position of neutrality. An Uzbek Ministry of Foreign Affairs spokesperson clarified that Uzbekistan maintained neutrality regarding the war in Ukraine. Uzbekistan hasn’t recognized the pro-Russian separatist-controlled districts in Ukraine’s Donbas, known as the Donetsk and Luhansk People’s Republics. The same is the case with Turkmenistan, which maintains a position it calls “positive neutrality.”

Turkmenistan seems to uphold its long-standing principle of “permanent neutrality” by avoiding all public comments on the Russia-Ukraine war. Kyrgyzstan’s foreign minister reiterated the country’s commitment to the principle of territorial integrity.

Dzhuraev concluded that “the Central Asian positions of neutrality should be read actually as covers for stances against the war. Central Asian countries have appealed to resolve the crisis on the basis of international law, and there is no doubt that international law would certainly be on the side of Ukraine and condemning Russia.”

According to Dzhuraev, “Neutrality should be read as the timid signs of siding with Ukraine as far as these countries can afford.”

While speaking on the relations of Kazakhstan with Russia and Ukraine, Zholdasbekova maintained that they “will be coming to more neutrality.” She further stated that “we believe in a bright future, and we believe that our great principle of multivectorism will still serve us after Russia’s aggression.”

Dzhuraev pointed out Russia’s tendency to “write Kyrgyzstan into a position of support of Russian actions by Russian sources.” It happened when Kyrgyzstani president Sadyr Japarov talked with Russian president Putin over the phone. After the call, Russia’s media agency reported that the Kyrgyz president supports Russia’s actions in Ukraine. However, as Dzhuraev said, “From Kyrgyzstan, there was no such word, not even close to that.”

Many cases are also coming to the surface regarding the declining press freedom in the Central Asian countries, particularly Kazakhstan and Kyrgyzstan. Recently, Kyrgyzstan authorities raided the broadcaster Next TV and detained its director over their published posts covering claims by a former head of Kazakhstan’s intelligence agency that Kyrgyzstan has secretly agreed to provide military support to Russia’s invasion of Ukraine.

“These kinds of troubling signs are there in Kyrgyzstan, but the press and civil society are fighting for their freedom and rights every day while dealing with numerous trials/changes against them,” said Dzhuraev.

Speaking of the existence of free press in Kyrgyzstan, Zholdasbekova gave the examples of a few instances where news channels were banned because of content. According to Zholdasbekova, “There is no limitation to what you are watching, but sometimes when channels become too aggressive, they somehow might be closed without any explanation.”