If a worst-case scenario pans out, the Russian invasion of Ukraine is likely to bring Beijing, Moscow and Pyongyang closer together. 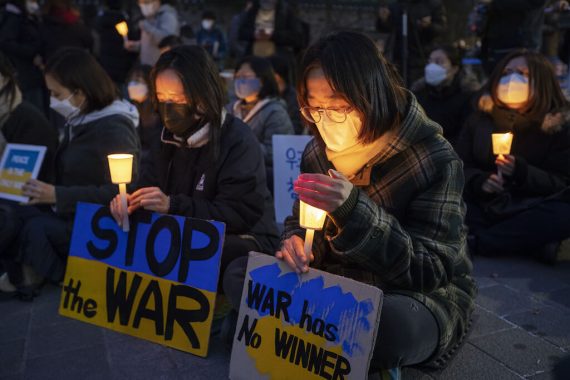 The Russian invasion of Ukraine, in conjunction with the backdrop of growing U.S. tensions with China, portend the likelihood of a new Cold War between the U.S. and its allies against China and Russia, which have a shared strategic interest in seeking to upend the post-1945 rules-based order in favor of their own autocratic systems of governance.

The room for maneuver in formulating policy for both South Korea and North Korea is further complicated by the range of outcomes that may arise from the conflict in Ukraine.

Accordingly, I outline the best and worst possible outcomes that may arise from the Russian invasion of Ukraine (bearing in mind that, in most best-and-worst case scenarios, the most likely outcome is usually somewhere in between), in response to which Seoul and Pyongyang might develop their policy responses.

In the best-case scenario, the tenacity of the Ukrainian people, in combination with increasing military aid from the international community, and growing numbers of fighting personnel (from the Ukrainian diaspora as well as foreign volunteers), enables Ukraine to fight Russia to a standstill, and possibly retake parts of its territory.

Optimistic hopes aside, two ‘worst-case scenarios’ are also plausible, and underscore the need for cool-headed diplomacy and planning.

The first concerns the possibility that Putin escalates the conflict even further and relies on overwhelming firepower to overrun Kyiv, enabling the establishment of a puppet state in control of central and eastern Ukraine.

However, a Ukrainian resistance movement will emerge in western Ukraine, and, with U.S. and EU military aid and covert assistance, undertake an insurgency to regain Ukraine’s sovereignty. Such an outcome would be comparable to the various proxy wars during the Cold War.

Combined with the impact of sanctions on Russia and growing anti-war sentiment in the Russian public, this would damage the credibility of Putin’s regime, possibly leading to an internal coup or a peoples’ uprising against Putin’s regime, a situation analogous to the downfall of the Ceaușescu and Milosevic regimes.

Read: Where Belarus and Belarusians Stand on the War in Ukraine

A second ‘worst-case scenario’ may arise in the event that nuclear weapons are used. This might result from a Russian decision to use nuclear weapons to force a Ukrainian surrender, or alternatively, in the event that a strengthened Ukrainian military begins counterattacks to regain its pre-2022 or pre-2014 borders, causing Putin to fear that his failed invasion attempt will spell the end of his regime, leading to a last-ditch effort to annihilate Ukraine.

Although NATO has no obligation to extend its nuclear umbrella over Ukraine, the moral outrage over a Russian nuclear attack on Ukraine – which had voluntarily given up its nuclear arsenal during the 1990s – could lead to a NATO nuclear response.

Another possibility is if public opinion in the transatlantic community swells and leads to NATO enforcing a ‘No-Fly Zone’, leading to armed conflict between NATO and Russia. All of these nuclear-related scenarios would be tantamount to the outbreak of World War Three.

Such a range of developments underscore the difficult balancing acts that both Seoul and Pyongyang face in their relations with Russia. Prior to Russia’s invasion of Ukraine, Seoul had sought closer relations with Moscow, partly in the hopes of finding a new partner to minimize the ROK’s reliance on Beijing to leverage diplomatic restraint on Pyongyang, and also as a Eurasian bridge for linking the ROK’s factories to European markets.

Since Russia’s invasion, Moon Jae-In has acted in concert with the international community in condemning Russia’s actions and imposing sanctions on Russia. Yet, with Yoon Suk-Yeol from the conservative People Power Party emerging victorious from the 2022 South Korean Presidential Elections, the new administration in Seoul is likely to take a more coercive line towards Pyongyang, whilst aligning itself more closely to the U.S.

The challenges facing Moon are significant. On the one hand, the ROK is faced with the lack of progress in seeking North Korea’s denuclearization; at the same time, the ROK’s declining birthrate is impacting its available pool of military manpower.

The U.S. failure deter the Russian invasion of Ukraine underscores the need for the ROK to be clear-eyed in ensuring its national security. Under President Park Chung-Hee, the ROK had attempted to develop an independent nuclear arsenal during the 1970s, and was only dissuaded from doing so by affirmation of the U.S. alliance commitment.

Yet, the debacle of the US withdrawal from Afghanistan underscores a longstanding concern for ROK defense planners – the possibility that the U.S. may lose its will to maintain the alliance. This is further compounded by the possibility that Russia is likely to align itself more closely to North Korea, as discussed below.

In particular, as the aforementioned worst-case scenarios arising from the war in Ukraine might mean the Pentagon’s prioritization of its assets for Europe’s security over the short-to-medium term, it may strain the U.S.’ longstanding ‘two-war capacity’ until the White House is able to adopt a significantly increased defense budget.

It is notable that a poll held shortly before the Russian invasion of Ukraine found that 71% of South Koreans were in favor of developing an independent nuclear arsenal. The possibility of a new nuclear arms race in the Indo-Pacific underscores the need for the Biden Administration to ensure that the US security commitments to its allies in both Europe and Asia remain strong, whilst working in close partnership with its allies to address any further provocation by China and Russia, and their regional allies.

Conversely, in order to ensure that the U.S. does not see the ROK as ‘free-riding’ on the U.S. security commitment, it might be necessary for Seoul to take an increased share of the defense burden of the U.S. in the Indo-Pacific, including contingencies in the Taiwan Strait and the South China Sea. Given the overall downturn in Sino-ROK relations in recent years, it is not likely that the ROK will baulk at the prospect of distancing itself from China.

For North Korea, the Russian invasion underscores how Ukraine’s voluntary dismantlement of its nuclear arsenal during the1990s led to its unilateral vulnerability to foreign invasion. Moreover, given the U.S. reluctance to risk war with Russia by militarily intervening in Ukraine, it further reinforces to the North Korean leadership the importance of an independent nuclear arsenal as the surest instrument to ensure regime survival. (That said, Pyongyang had likely come to this conclusion even before the invasion of Ukraine, and did not need the latter event to crystalize such a view).

In the event that either of the aforementioned worst-case scenarios pan out, the Russian invasion of Ukraine is likely to bring Beijing, Moscow and Pyongyang closer together. The combination of international sanctions and isolation will inflict severe damage to the Russian economy.

Given the refusal of China and North Korea to condemn the Russian invasion of Ukraine (both Beijing and Pyongyang went so far as to claim that it was the U.S. that provoked the invasion of Ukraine in the first place), the current crisis is likely to reinforce Putin, Xi Jinping and Kim Jong-Un in their shared interests in working together to counter their common adversary, the U.S.

Faced with isolation by most of the international community, it is likely that Russia will attempt to mitigate the impact to its economy by offering increased arms transfers to North Korea as barter trade for access to North Korea’s untapped mineral wealth, hence portending the likelihood of North Korea acquiring a more modern conventional arsenal that the ROK will have to take seriously in light of its declining fertility rate.

Both developments will take time, due to the need to upgrade both North Korea’s largely antiquated arsenal as well as its dilapidated mining infrastructure; nonetheless, the prospect of a re-armed and more industrialized North Korea is a contingency that Seoul must plan for.

The third implication, however, stems from the possibility that Putin’s gamble in Ukraine backfires on his regime which collapses, in which case both Koreas would do well to contemplate the implications of a post-Putin Russia.

In the event that the post-Putin period sees a renewal of democracy in Russia, it would be in Seoul’s interests to assist in the consolidation of democracy and socio-economic stability by encouraging investment in the Siberia and Russian Far East, in order to forestall the type of public disillusionment and nationalist discontent that Putin had exploited in his rise to political power that began in 1999.

Conversely, in the event that the invasion of Ukraine leads to Putin’s downfall, such an outcome would likely force North Korea to rely even more so on China’s patronage for its regime survival.