Turkey’s stakes in the Russia-Ukraine war are not only about geopolitics. 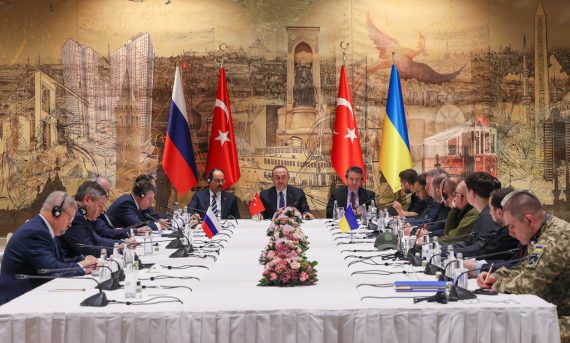 Turkish Foreign Minister Mevlut Cavusoglu (C) gives a thank you speech during the peace talks between delegations from Russia and Ukraine at Dolmabahce Presidential Office in Istanbul, Turkiye on March 29, 2022. Photo by Cem Özdel. Anadolu Images.

On March 28-30, Turkey provided good offices to Russian and Ukrainian delegates in Istanbul. No doubt, one meeting is not enough to yield any tangible results such as a long-term ceasefire or a permanent peace agreement. Such developments in negotiations require more than a series of meetings between the parties of the conflict.

However, it is important for the two sides to talk while the war is ongoing, also given the fact that there is no other hope to end the war. Another factor is the existence of a third party to bring Russia and Ukraine together, and Ankara has earned this role.

It comes as no surprise that Turkey can mediate, facilitate, and provide good venues between Russia and Ukraine given its mutual trust-based relationship with both countries. While Turkey enjoys a long-term, high-level defense cooperation in engine and drone technology with Ukraine, it also enjoys long-term strategic energy cooperation with Russia in the oil, gas, and nuclear sectors. Turkey’s relations with Russia and Ukraine also cover the areas of trade, tourism, and other investments.

Turkey has carefully crafted a unique neutrality in the Russia-Ukraine war, and gained the confidence of both countries. While President Erdoğan called on NATO to take concrete action instead of merely uttering words to deter the Russian aggression, he also criticized practices such as firing a Russian conductor in Germany and banning Russian literary works in Italy in the name of sanctions against Russia.

Likewise, despite condemning the Russian invasion of Ukraine in strong terms, which was perfectly in line with Turkey’s long-held position on the annexation of Crimea, Ankara did not join in the chorus of imposing sanctions against Russia as a matter of principle. When the war started, instead of jumping on the bandwagon of the U.S.-led Western campaign to hurt Russia, and despite being a NATO member and under pressure from its allies, Turkey made its own way.

Even at the expense of paying a price, Turkey strives to adhere to its principle-based position for the sake of preserving its consistency in foreign policy and the trust it enjoys with its partners. Over the years, Turkey’s approach to sanctions against Russia has been a case in point. Furthermore, one of the central issues surrounding the Black Sea security and the war in Ukraine is the role of the Turkish Straits. As expected, Turkey remained committed to the Montreux Convention by blocking the passage of four Russian warships.

Despite the hurtful nature of this move for Russia, it did not anger the latter; on the contrary, Russian officials expressed their respect for Turkey’s decision as the hallmark of its neutrality and principle-based position. In fact, Turkey’s neutrality is consistently in line with its calls preceding the war—a war that Turkey did its best to prevent.

Not just for love

Turkey’s consistency in its neutrality is also related to its high stakes in the war. In all scenarios, Turkey arguably stands to lose the most from a prolongation of the war. The annexation of Crimea was a geopolitical loss for Turkey in 2014—Russia created a huge A2/AD (anti-access/area denial) bubble by deploying S-400 systems in the Crimean Peninsula covering the airspace of almost the whole Black Sea and northern parts of Turkey. A Russian advance further along the Black Sea coast would be the last thing Turkey wants to see with the Ukraine war.

The direction of the Russian invasion that has focused on southern Ukrainian cities such as Kherson and Melitopol, where Russians made their greatest advance, thanks to the springboard function of Crimea, and Mariupol with an eye on Odessa, proved Turkey’s concern to be correct.

Turkey’s stakes in the Russia-Ukraine war are not only about geopolitics. As an importer of staple food products from both Ukraine and Russia, such as wheat and sunflower oil, Turkey is susceptible to an interruption of the flow of these products. This would be a big problem given the direct impact on Turkish households and public.

In fact, even a rumor in Turkey about a shortage of sunflower oil caused temporary panic buying. Since Turkey is struggling with high-level of inflation, the issue became sensitive enough that it had to negotiate the release of Turkish commercial ships carrying sunflower oil that had been stuck in the Sea of Azov.

The Russia-Ukraine war is hitting Turkey where it hurts most: the economy. The war has already driven up energy prices and this means a greater current deficit for Turkey as an energy-dependent country, as well as across the board price increases. For the fiscal year 2022, both lower energy prices and a huge tourism turnout are vital for the Turkish economy, which is in need of a vast amount of foreign currency.

Tourism is one of the leading sources of foreign currency for Turkey, and both Russian and Ukrainian tourists contribute immensely to the Turkish tourism sector. It is obvious that it would be a luxury for people whose countries are at war to travel for leisure. Thus, Turkey badly needs the war to end.

Because of its neutrality, credibility, and its extremely high stakes in the war, Turkey is well-positioned to pave the way for peace in Ukraine. That’s why relatively considerable advancements have occurred in Turkey such as the first direct meeting between Lavrov and Kuleba in Antalya, and the Russian decision to scale back military engagement in Kyiv and Chernihiv as a result of the talks in Istanbul.

It is certain that the Russian move to downscale its military engagement in Ukraine is nothing more than a tactical step; however, even the declaration of such a gesture is a success for Turkey, given the level of humility it takes from an extremely proud man like Putin.

Whether he is aware of it or not, what Putin urgently needs is an “honourable exit” as offered by Erdoğan—and Putin knows no one who is more reliable and trustworthy than Erdoğan. If one day, the Russia-Ukraine war ends with a declaration made in Turkey, it shouldn’t be surprising.