What does President Erdoğan calculate to gain from the diplomatic efforts in the Russia-Ukraine war? 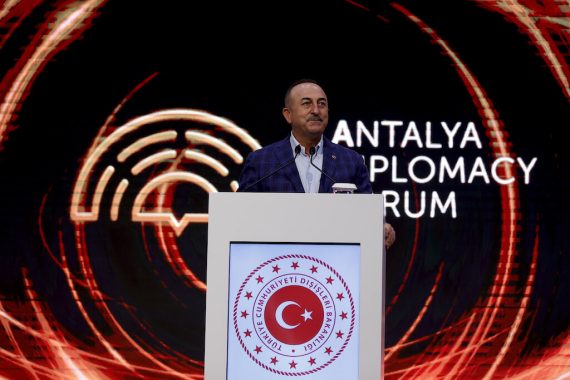 The Russia-Ukraine war has revealed the thin and fragile line between the West and Russia in the guise of a new geopolitical power struggle. During and after the Cold War, the two blocs have been waging a power struggle over different countries/regions instead of directly engaging in a hot war. Cuba, Vietnam, Afghanistan, Yugoslavia, and finally Syria have been theaters of this struggle.

The Ukraine crisis which emerged over the Russian annexation of Crimea in 2014 and continued with the de facto situation in the Donbass region until last year, has now reached a new phase. There is a new geopolitical showdown between Russia and the U.S.-led Western bloc unfolding before our eyes. But this time, there are some differences from the Cold War era.

Although a common and harsh sanction policy against Russia has begun, one big question is whether the West, as a unified bloc, can walk the same political and strategic line as it did during the Cold War. Principally, there exists the energy issue for members of NATO that are in the European Union (especially Germany), worrying Europe due to lingering uncertainties. And there is not any serious sign that the U.S. has a concrete projection to convince its European allies to replace Russian gas at this point.

What is more, foresight of an intra-European leadership struggle that is likely to emerge between Germany and France in the near future, after Germany’s declaration that it would increase its military power with a large defense budget, suggests that it is possible to talk about multiple scenarios regarding the future architecture of the Transatlantic bloc.

Turkey and the War in Ukraine

Another important aspect of the Ukraine war is the exceptional position of Turkey, which has NATO’s second-largest military and whose role in regional issues significantly increased in recent years. President Erdoğan was able to strengthen both Turkey’s effectiveness and diplomatic power in many regional issues such as northern Syria, Libya, the Eastern Mediterranean, and the Southern Caucasus.

What does President Erdoğan calculate to gain from the diplomatic efforts in the Russia-Ukraine war?

Turkey’s ability both to follow independent policies that occasionally conflicted with Russia and to develop joint initiatives with it explains Turkey’s adaptation to the multipolar world order. Now, there is the Ukraine crisis.

So, what does President Erdoğan calculate to gain from the diplomatic efforts in the Russia-Ukraine war? As a political leader who seems to be one of the few leaders of a NATO country with relatively good access to Putin, what could be the advantages and drawbacks of his leadership in diplomacy means?

Turkey’s deepening relations with Russia in the last ten years started with cooperation in the fields of energy, trade, tourism, and bilateral investments; cooperation in the defense industry; and building joint initiatives on specific regional/geopolitical issues. However, it is a relationship that works like a double-edged sword.

Namely, we saw different perspectives from Russia and Turkey on the Middle East–particularly over Syria–on the Southern Caucasus, the Black Sea, and the Eastern Mediterranean, due to the overlap in the foreign policy agendas of the two countries.

At the same time, we need to remember two concrete and major tests that the relationship has overcome in recent history: Turkey’s shooting down of the Russian fighter jet at the end of 2015, and the murder of Russia’s ambassador to Ankara, Andrei Karlov, in front of cameras, just a few months after the atmosphere settled after a long period of tensions and mutual moves.

But in spite of all of this, we see that the two countries stayed away from any serious conflict. For example, while Turkey did not recognize Russia’s annexation of Crimea and now the invasion of Ukraine, and has clearly stated its own position in support of Ukraine’s territorial integrity and the right of sovereignty on the basis of international law and legitimacy, it has also declared since 2014 that it would not be a part of any sanction against Russia.

Turkey also avoids a confrontation with Russia along with the Western bloc and adopts a strategy of not taking a categorical position, i.e., not joining the sanctions campaign.

Turkey wants to minimize tension that may arise from conflicting interests through immediate and timely intervention and reaching a middle ground with mutual trade-offs when necessary.

Turkey approaches Russia differently than all the other members of the Western bloc, while also insisting on its principal position, i.e., the objection to the annexation of Crimea and to the invasion of Ukraine. Turkey also avoids a confrontation with Russia along with the Western bloc and adopts a strategy of not taking a categorical position, i.e., not joining the sanctions campaign.

This has recently served to open up a diplomatic space for Turkey as we have seen in Syria. Again, despite various conflicts like those in Libya and in the Mediterranean, Turkey and Russia could take a joint initiative in the process leading up to the Berlin Conference. So, can Erdoğan and Putin find a similar path in Ukraine?

It is primarily important to look at the approaches of the two leaders in times of crisis.

There are two basic elements present in Erdoğan and Putin’s relationship that most leaders do not have in their bilateral relations: timely intervention and playing their cards face up. The main point here is that the two leaders intervene immediately, especially in times of heated tension in the relationship, and open the option of negotiations transparently.

These two aspects helped to ease and settle serious crises in bilateral relations and regional conflicts in the last six years, and helped to find a solution without facing greater catastrophes.

This is, of course, not an alliance relationship. Both leaders could sustain their relationship through dialogue and a search for common ground as they approach each other with politically realistic, flexible, and viable options. Pragmatism lies at the heart of this flexible cooperation, which is more beneficial than conflict for both sides.

Russia is well aware of the costs of a global economic, financial, technological, and social isolation, and the mid- and long-term risks to itself of the prolongation of the war. It is quite possible at this point that Russia has an exit strategy that it plans to use in the process of dialogue with regional or global actors towards the peace negotiations.

Ukrainian President Zelenskiy describes his relationship with Erdoğan with the words of trust. Turkey’s clear emphasis on Ukraine’s territorial integrity and its right of sovereignty for years, its fair approach to Ukraine in the international diplomacy arena, and the bilateral trade and military relations developed recently are the main reasons behind Zelensky’s positive assessment of Turkey.

Zelensky, just like Putin, approaches the issue from a realpolitik and pragmatic point of view. He is well aware that from the first moment the crisis escalated, no leader of any NATO country has had any engagement with Putin that had any potential of concrete and realistic results. As a matter of fact, for Zelensky, the Russian government’s official approval of a list of countries that commit “unfriendly actions” against it confirms the importance of Turkey’s presence at the diplomacy table as the only NATO member that is not on this “unfriendly countries” list and which still has not broken relations with Russia.

Abdurrahman Babacan is currently a faculty member at the Faculty of Humanities and Social Sciences at Istanbul Medipol University. His research interests are Turkish political life, Turkish foreign policy, political theory and global politics. In addition to national and international articles and book chapters, his books published on these topics are September 11: Analysis of Historical Transformation (2011), End of the Millennium: February 28 (2012), A Society in Purgatory: Arakan (2013), From the Age of Suspicion to Civilized Barbarism (2014), July 15: Past, Future (2018) and The Market Mindset and Neoconservative Morality (2018).