Turkey has officially confirmed that the warships of both countries would not be allowed to pass through the Turkish Straits. 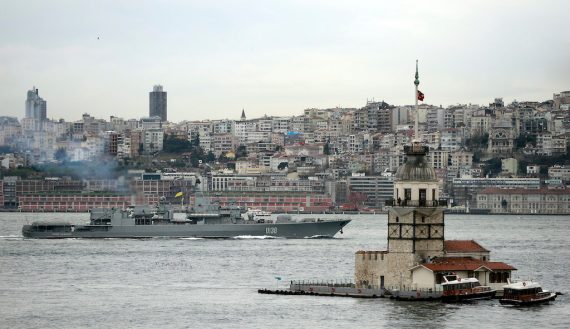 A Ukrainian warship "Hetman sahaidachny" passes through the Bosphorus to enter the Black Sea in Istanbul, Turkey. Photo by Anadolu Images

The seas, and especially narrow sea passages, are critical to ensuring maritime transport and preventing possible threats. One such significant maritime passages is the Turkish Straits, formed by the Çanakkale Strait, the Sea of Marmara, and Istanbul Strait. The Turkish Straits constitute the sole connection of the Black Sea to the rest of the world.

The convention does not only relate to the “passage” of ships, but also to the “security” of Turkey and the Black Sea countries. The regime it established is once again on the agenda following the military attack launched by Russia on Ukraine on February 24, 2022.

The initial discussion relates to whether warships of Russia and Ukraine will be allowed to pass through the Turkish Straits. A second important question is whether the passage of future warships will be allowed in the event of possible international military measures against Russia.

General outlines of the regime introduced by the Montreux Convention

The Montreux Convention brings some assurances that reduce the security concerns of both Turkey and other Black Sea littoral countries arising from foreign warships; the convention uses the concept of warship instead of “military ship.”

The first group of measures is to ensure Turkey’s security in the straits’ region during peace time in which, civilian ships can pass freely, depending on the convention’s basic principle of the freedom of passage of ships of all states – whether they have a coast on the Black Sea or not.

Therefore, military ships have the same right to free passage. However, they are subjected to some significant limitations. Warships of all countries are under the obligation to notify Turkey prior to their passage, except for auxiliary ships specially built for the transport of fuel (Article 9).

Moreover, the highest (ceiling) total tonnage of all foreign naval forces that can transit through the straits, whether they have a coast to the Black Sea or not, will not exceed 15,000 tons. Apart from this tonnage limitation, the total number of ships passing through the straits at once cannot be more than nine (Article 14).

Some relative advantages are provided to the Black Sea countries, whose warships can pass with a tonnage not greater than 15,000 tons through the straits alone. They can be accompanied by at most two torpedoes (Article 11).

The Montreux Convention brings much wider guarantees for Turkey both in the cases where Turkey considers itself to be threatened with imminent danger of war and in cases where Turkey is a belligerent side. In these two situations, Turkey is free to regulate the passages of warships however it wishes (Articles 20, 21).

If Turkey is not a belligerent state, just as in the present situation of a conflict between Russia and Ukraine, warships of all states enjoy the freedom of passage by complying with the number and tonnage limitations as described above. The significant exemption here is that Turkey should not allow the passage of warships of belligerent states. Vessels of war belonging to belligerent powers will not pass through the straits (Article 19).

The second exception states that warships can pass in the case of assistance rendered to a state that is the victim of aggression by virtue of a treaty of mutual assistance binding Turkey, concluded within the framework of the “Covenant of the League of Nations” (Charter of the United Nations).

Although the convention stipulates that the Turkish government will designate airlines, except for the prohibited areas of the straits, in order to ensure the passage of civilian aircraft between the Mediterranean (Aegean) and the Black Sea (Article 23), there is no such freedom for military aircraft.

Russia’s military attack on Ukraine and the Montreux Convention

In order for the provisions of the Montreux Convention to go into effect, especially for Turkey to start using its powers and responsibilities, a “war” situation must exist.

In the context of the ongoing Russia-Ukraine War, Russia officially declared that it launched a “special military operation” against Ukraine on the morning of February 24, 2022, referring to some “justifications.” Whatever its name, this declaration is the official declaration of the start of a comprehensive military operation against another state.

Russia’s military attacks, in particular, involve the extensive use of land, sea, and air forces. Moreover, Ukraine has declared that Russia has launched a comprehensive military attack against it and that they are also defending their country, that is, carrying out military operations.

Recently, Turkey officially stated that there is a state of war at present, triggering the application of the relevant articles of the Montreux Convention. The statements of many other states and officials of numerous international organizations, including the Secretary General of the UN, confirm that Russia has launched a comprehensive military attack perhaps even with the intention of a full-scale occupation of Ukraine. This concrete evidence shows that there is a state of war between the two countries.

Article 19 of the Montreux Convention provides that if Turkey is not at war in a time of a war situation, warships of any warring state will be prohibited from passing through the straits

The second significant point now is whether these two warring countries are able to access the Turkish Straits with their warships during this war. Is Turkey legally obliged to allow them passage?

There are, however, some exceptions to this ban: the ban should not block Turkey or any other member of the United Nations (League of Nations at the time) from complying with the obligations that may arise from any binding decisions of the UN Security Council (Council of the League of Nations Convention at the time).

In the case that the UN Security Council takes a decision that envisages aid to Ukraine or measures against Russia, Turkey has to allow warships to pass through the straits in this context, and has to comply with this decision.

At the same time, it would not be illegal if Turkey allowed them to pass as these measures are designed to protect the very fundamental tenets of the international community – peace and stability.

The final exception is that Turkey should allow the warships of Ukraine and Russia to pass the straits to return to their respective base ports in the Black Sea. Paragraph 4 of Article 19 states that “vessels of war belonging to belligerent Powers, whether they are Black Sea Powers or not, which have become separated from their bases, may return thereto.”

Therefore, especially Russia, with its intense overseas military activities, may request such warships currently in the Mediterranean or other sea areas to return to their bases in the Black Sea.

In fact, Mevlüt Çavuşoğlu, the foreign minister of Turkey, revealed that such a request had come from Russia, but three of the four warships were overturned as their home ports were not in the Black Sea.