Russia's invasion of Ukraine is compelling European countries to rethink their defense spending and security strategies. 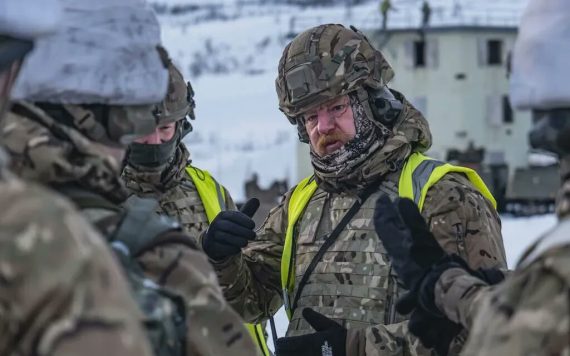 UK Royal Marines attend the winter warfare training ahead of the Cold Response 2022, near Bardufoss, Norway on March 17, 2022. Photo by NATO, Pool via Anadolu Images

World military spending rose to almost $2 trillion in 2020, according to Stockholm International Peace Research Institute (SIPRI) report. The Russia-Ukraine war will prompt many countries to increase their annual defense spending. Against the backdrop of the ongoing war, it would be no surprise to expect an exponential rise in world defense payout in 2022.

Russia’s invasion of Ukraine is compelling European countries to rethink their defense spending and security strategies. Many European Union countries including Germany, Sweden, Belgium, Poland, Lithuania, Romania, Denmark, France, Latvia, and the Netherlands, have declared their intention to increase their annual defense expenditures.

During a special session of the Bundestag, Scholz further emphasized the importance of “more security to protect freedom and democracy in Germany.” However, it is interesting to note that for many years, Germany has resisted the pressure from the U.S. and other countries to raise its defense spending to 2% of the GDP, which is the guideline and expected target for all NATO members. The recent increase in defense spending manifests a major shift in Germany’s pacifist doctrine.

In Sweden, the security threat created by Russia led the Swedish government to announce a significant boost in their military spending to 2% of the GDP. Sweden used to spend almost 4% of its GDP on its defense budget during the Cold War era. After the disintegration of the USSR and the subsequent end of the Cold War, Sweden’s defense budget was drastically reduced to about 1%.

The recent defense budgets enlargements in Europe are taken in response to the deteriorating security situation in Ukraine. Swedish Prime Minister, Magdalena Andersson, said in a news conference, “Today, we present a new initiative with a clear message to the Swedish people and to the world around us. Sweden’s defense capability must be greatly strengthened.”

Eyebrows are raised in Brussels as well. Belgium’s defense minister, Ludivine Dedonder, has recently called for more funding of Belgium’s armed forces. This is said to be done in addition to the €10 billion that the federal government decided to invest in Belgium’s military forces in the coming years.

Like Sweden and Germany, Belgium also falls far short of NATO’s target. Considering the escalating conflict between Russia and Ukraine, in the coming days, Belgium is expected to announce an increase of its defense budget as well.

Poland, which has followed NATO’s 2% defense spending guideline, has also decided to raise the spending on its armed forces more than planned as the emerging security threat leads Poland to reconfigure its plans.

While addressing the lower house of the parliament, Jaroslaw Kaczyński, the leader of the Polish ruling nationalist Law and Justice party, stated, “There will be an amendment (to the defense plan): 3% of GDP on defense next year, then we will increase it.”

Seimas, the unicameral parliament of Lithuania, voted unanimously to increase the defense spending by €300 million. The country’s defense minister, Arvydas Anušauskas, said “Lithuania’s defense budget increase will allow us to get arms earlier than planned before, which are needed for strengthening Lithuanian’s army and, additionally, to host NATO troops coming to Lithuania.”

In a similar vein, Denmark’s prime minister Mette Frederiksen has also announced an increase in the country’s defense budget. Under an agreement between parliamentary parties in Denmark, it was decided that defense spending will reach 2% of the GDP by 2033. This is equivalent to an increase of 18 billion Danish crowns ($2.65 billion).

Frederiksen called this move the “largest investment in Danish defense in recent times.”

After Russia’s invasion of Ukraine, President Klaus Iohannis also raised the need to increase the defense spending to 2.5% of the GDP from the current mark of 2%.

In addition, there are other countries that are contemplating an increase in their defense expenditure. Boris Johnson could increase the UK’s defense budget amid fears of the growing Ukraine crisis. The Canadian defense minister also said his country is considering “aggressive options to increase Canada’s military budget.”

The rising defense budget trend all over Europe has also become a source of inspiration for Japan. Japanese Prime Minister Fumio Kishida talked about the formulation of the National Security Strategy (NSS) to ensure the protection of Japanese people’s lives.

China also announced it plans to spend 7.1% more on defense in the year 2022. It is clear that Beijing is considering challenges that have emerged from several fronts ranging from U.S. naval and air missions in the South China sea, the issue of Taiwan, and a prolonged border dispute with India.

Increasing defense spending: what does it mean?

Since the advent of Russia’s military attack on Ukraine, countries from Germany to China are bluntly increasing their defense budgets. Meanwhile, many countries have experienced decades of underfunding, and political and systematic neglect of their defense portfolio.

The chief of the German army Lt. Gen. Alfons Mais criticized the German government over “long running neglect of military readiness in the country.” He further stated that “his forces are more less powerless.”

The critical question, therefore, seems to be the following: Would a sudden leap in countries’ defense budgets lead to sudden improvements in their defense capabilities.

Also Read
What Can the F-35 Crisis Further Lead To?