Should Sweden or Finland actually join NATO, it would with no doubt change Russia’s security calculations. 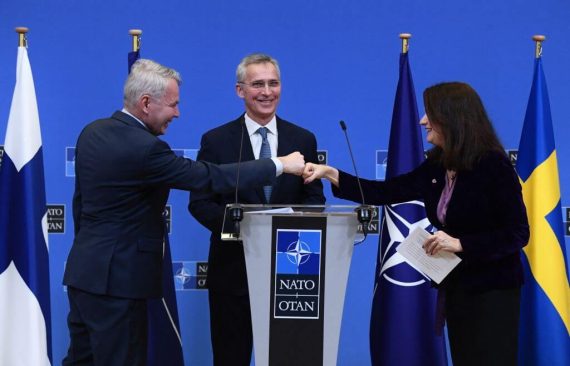 The current and latest waves of upheaval in international relations and the global order that have been precipitated by the Russian military operations in Ukraine in the latest iteration of the Ukrainian crisis are likely to have significant implications, even if the war is not yet over. The situation creates a lot of rumors and speculations regarding what will stem from these events in the wider world, beyond the war zone.

How will the Russia-Ukraine War affect the stance of countries that have historically followed a non-aligned or neutral status? Past political and military tensions with Russia have been used to open public discussion in Finland and Sweden, and to lobby for the idea of breaking with the past security identity policy and join NATO.

Sweden and Finland have a rhetorical tradition of neutrality or at least non-alignment in times of armed conflict. Sweden has adopted this stance after a disastrous series of wars with Russia in the 18th and 19th centuries, culminating in the loss of Finland during the Napoleonic Wars. Finland adopted the non-aligned strategy as a national survival mechanism in the wake of the struggles and challenges of being caught between the geopolitical ambitions of the Soviet Union and Nazi Germany during World War II (known as the Winter War of 1939-1940 and the Continuation War of 1941-44). The Swedish stance has evolved over time and circumstances, driven by mainstream establishment politics.

Historically, Sweden has walked a very fine line that defies its claim to neutrality or non-alignment, for example sending arms to Finland during the Winter War, Swedish volunteers serving in the Nazi SS (Protection Squadron), or deporting Baltic civilians and soldiers back to the waiting Soviet NKVD, the predecessor to the KGB. In the wake of the Cold War, Sweden undertook large defence cuts to a self-sufficient military structure created to deter either side, but also drew closer to NATO cooperation.

The Swedish government’s political rhetoric in the 21st century began to move away from the word “neutral” and even downplayed non-alignment as a policy. Conflict events occurring elsewhere were used to try to gauge and manipulate public opinion to be more positive towards NATO membership. The events in Crimea in 2014 were used to shift public opinion, though unsuccessfully. What did shift public opinion was the story of a “Russian submarine” in the Stockholm Archipelago.

Although, the Swedish political elite favors NATO membership, the population is less enthusiastic.

Although, the Swedish political elite favors NATO membership, the population is less enthusiastic. Finland has also faced dilemmas, especially concerning the historical legacy of the country and its attitude towards neutrality or at least non-alignment. There have been periods of NATO lobbying Finland and Sweden to join the alliance, for example, in the wake of the alleged “Russian” submarine sightings near Stockholm and Helsinki (Helsinki – the two countries are the only non-NATO members in the Baltic Sea other than Russia).

The avoidable tragedy that has unfolded in Ukraine in February 2022 has reignited a new mass hysteria that comes fresh after the mass hysteria of the COVID19 pandemic. A new source of fear and loathing has replaced the virus: Russia and President Vladimir Putin, seen as its ultimate personification. The context of this latest conflict has been used as a pretext to reignite the NATO debate in both countries.

This fear of Russia has been used as a policy instrument in the past, intended to engineer public consent by presenting a picture of the so-called Russian threat and asserting or assuming that this threat may apply to Finland and Sweden which are not capable of withstanding such an attack and therefore must submit to the notion of collective defence. All this, even if no sound reasoning is offered as to why Russia would want to attack either country.

There have been numerous public protests against the war and Russia’s invasion of Ukraine in Sweden and Finland. How has this affected their political calculus? One of the constraints for the Finnish and Swedish governments is public opinion and collective public memory from historical legacy. This leaves the Swedish and Finnish governments, for now, in the position of making symbolic public statements that condemn Russia and support Ukraine, and of pledging support and cooperation with NATO.

But, for now, the issue of NATO membership is still off the table as the countries’ governments lack sufficient parliamentary and public support to push through such a “controversial” security proposal.

Rather, there is the understanding that the Russia-Ukraine War provides the basis for spurring a broader debate. Meanwhile, Finland has adopted what it calls the “NATO option provision,” whereby if it feels that NATO membership is required for ensuring Finnish security, it will begin the membership application process.

The general opinion and consensus of various non-partisan observers on the two countries’ attitude and prospects towards joining NATO is that there is currently limited likelihood of this happening in the immediate future. In spite of the external and foreign environment and pressures that create an increasingly closer relationship between these countries and NATO, there are sufficient divisions and constraints in domestic politics that hinder the pursuit of such a move.

Possible Consequences of the Different Scenarios

Finland and Sweden’s neutrality/non-alignment status has long been used as a means of regulating and managing their geopolitical security, and to navigate the pitfalls and traps of getting actively involved in the wars of larger belligerent powers. These national foreign policy identities have been successful for both countries in preventing undue foreign interference and manipulation from the time of the Cold War onwards.

Read: The Search for a Third Way

The identity of being neutral or at least non-aligned has signaled an independence from what Russia in the last two decades has seen as an increasing threat from NATO. Although there are differences and strains in the diplomatic relations between the two Nordic countries and Russia, the relations are on the basis of what can be classified as a “cold friendship.” Should Sweden or Finland actually join NATO, it would without a doubt change Russia’s security calculations concerning both countries pushing them to an enemy or adversary status.

Consequently, the notion of collective security by joining NATO is likely to have the opposite effect through increasing the collective insecurity of the two countries based on the new relationship that will result from their sovereign choice. It becomes a matter of achieving a harmony between freedom of action and a reasoned security perception that avoids the geopolitical traps experienced by both Finland and Sweden in their respective national histories.