The modus operandi of international organizations depends on the changing global power dynamics. 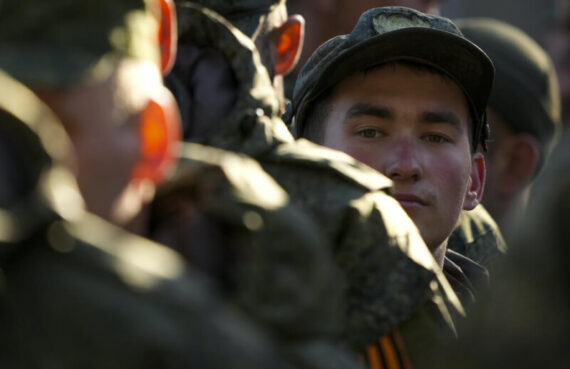 Russian citizens drafted during the partial mobilization are seen being dispatched to combat coordination areas after a military call-up for the Russia-Ukraine war in Moscow, Russia on October 10, 2022. Photo by Stringer via Anadolu Images

he war in Ukraine has escalated after Putin’s official endorsement of the referendums in Donetsk, Luhansk, Kherson and Zaporizhzhia and their subsequent annexation. These regions amount to approximately 15% of total Ukrainian territories. With this decision, the favorable climate that emerged with the grain corridor deal has all but dissipated.

UN Secretary-General António Guterres criticized the decision as it grossly violates international law and the UN Charter. European countries and the U.S. ascribed the referendums as “shams”, declaring that they would not recognise them. The Turkish foreign ministry released a statement indicating that referendums are unacceptable since they breach international law. From his end, Ukrainian President Volodymyr Zelenskyy announced a quick bid for NATO membership, a move that NATO Secretary General Jens Stoltenberg appreciated.

Popular will versus power politics

First, Russia has instrumentally used and abused the concept of popular will. From Moscow’s standpoint, the referendum was the only way to legitimize its actions amidst widespread international distrust. The same tactic was also used in 2014 when Russia annexed Crimea. Although the Russian media frequently quoted observers it deemed independent, most commentators viewed the five-day voting process as unconstitutional and lacking independent monitoring.

The referendums were initially scheduled for November but moved to an earlier date. This schedule change seems to be a tactical response to Russia’s military backlash. The recent retreats of Russian troops from several regions due to the Ukrainian counteroffensives reflect these difficulties. Furthermore, the partial mobilization of 300,000 individuals is another sign of the lacklustre Russian military performance.

Moreover, the narrative of the popular will (embodied in the sham referendum) is a strategic move that lays the foundations of a new casus belli. Such a selective and distorted approach to popular will aims to impede the growing positive attitude of the Ukrainian public towards EU and NATO membership.

According to a recent national survey by Rating, 86% and 83% of the respondents would support Ukraine’s accession to the European Union and NATO, respectively. In contrast, Russian public attitudes towards the war are not part of this narrative. Focus is solely applied to the separatist regions whose peoples have been allegedly “oppressed” by Kyiv.

The rhetoric of “divided nation” and “oppressed people”, together with the initial aims of “demilitarization” and “denazification”, remain the central pillars of Russia’s pretext for invasion.

Russia’s repeated emphasis on popularity seems to give lip service to national interests while diverting public attention from the irritating problems experienced by Russian troops in the field.

Meanwhile, President Zelenskyy’s quick bid for NATO membership and hope for a fast-track process would probably represent another futile attempt. The Ukrainian bids for NATO -and the EU- is reminiscent of an episode from Thucydides’s book The Peloponnesian War. In the part of the Melian Dialogue, the people of Melos naively trusted in Lacedaemonians (Spartans) that they would come to save them. On their way to subjugate Melos, the Athenians stated: “An intending ally looks not to the goodwill of those who invoke his aid but to marked superiority of real power, and of none is this truer than of the Lacedaemonians.”

China’s Abstention and the Fate of the UNSC

China abstained in the UN Security Council vote on Russia’s annexation of Ukraine. Similarly, India, Brazil, and Gabon abstained. Given that Russia has veto power as a permanent member, the UNSC draft resolution put forward by the U.S. was doomed to fail. Nevertheless, China’s behaviour, which has vowed to pursue “friendship with no limits” with Russia before the Russian invasion, deserves further scrutiny.

Abstaining from the UNSC vote is the conventional pattern followed by China on many occasions. Beijing’s standpoint is based on its constitutional foreign policy wisdom of “Five Principles of Peaceful Coexistence”, namely, mutual respect for sovereignty and territorial integrity, mutual non-aggression, non-interference in each other’s internal affairs, equality and mutual benefit, and peaceful coexistence.

Beijing’s attitude essentially aims to maintain consistency in its foreign policy decisions. Therefore, the UNSC constitutes a strategic venue for China to keep its discourse of neutrality while calling for restraint from Russia and Ukraine.

In addition, three states also abstained from voting, including Brazil and India, which are members of the BRICS, a rising economic alliance that challenges the predominantly Western-led economic order. India did the same for the UNSC Resolution 2623 immediately after the Russian invasion of Ukraine. Its “neutrality” vis-à-vis anti-Moscow resolutions is a message that New Delhi refrains from adopting a clear-cut position, especially when the international balance of power is shifting. As regional power structures will solidify with time, and India’s national security concerns will be gradually relieved, different voting behavior patterns for India will probably occur.

Increasing national security concerns with the re-escalation of the Sino-Indian border conflict under Xi Jinping makes India a cautious actor emphasizing neutrality in times of uncertainty. It has become an actor that does not want to alienate the West while maintaining its non-Western alignments within the BRICS and the SCO.

Some may see the abstention of China and India as a silver lining since both capitals did not openly take Russia’s side. However, taking the half-full glass approach in international power politics could be misleading. China and India know well that Russia will unequivocally use its veto power. Therefore, given the uncertainties of global power politics, they opted for some nuance. They avoided offending Moscow and Washington at the same time.

China’s conventional stance can bring important conclusions about the UNSC. On the one hand, there are no legally binding implications of a UNSC draft in forcing countries to act against any aggressor. The only consolation is that it sometimes represents a window of opportunity to determine some reputational costs for nations taking decisions detrimental to world peace.

Due to international power politics and the bipolar nature of the Cold War, the UNSC has proven ineffective as long as one of the superpowers held veto power. The world is now shifting to a multipolar structure, paving the way for the rise of some regional powers. The current uncertainties in the global balance of power represent an opportunity to step outside the archaic UNSC structure consisting of five permanent members and ten non-permanent members that change every two years.

“It is also a fact that in time the United Nations moved away from the capacity to meet the expectations of humanity for peace and welfare. In particular, the Security Council has taken such a form, only serving the interests of its five permanent members holding veto rights, but standing idle to the oppressions in other parts of the world,” President Erdoğan underlined, as he has repeatedly emphasized the utmost necessity of reforming the UNSC.

The UN Security Council, which claims to play a crucial role in ensuring global peace, has turned into an old-fashioned organization in which certain countries cannot go beyond expressing statements to condemn certain governments. Since the UNSC process is skewed, no effective actions are expected from this council anytime soon.

The argument “easy to build and hard to demolish” often made about international institutions will also be true for the UNSC. Although there have been brief moments of consensus in the past, for example, the UNSC Resolution 678 during the first Gulf War, in which China abstained, but the other four permanent members voted yes, this scenario is hard to be replicated in the future.

Considering all this, it would not be a logical scenario for Russia to be condemned or excluded from the UNSC for its aggression against Ukraine. Meanwhile, Moscow is likely to continue playing the hymns of popular will to justify its actions. One of the easiest ways to frame one’s interests is to say, “because the people wanted it that way”. The great power politics will predominate the actor behavior, and the modus operandi of international organizations will continue to depend on the changing global power dynamics, as has been the case before.

Burak Elmalı is a Deputy Researcher at TRT World Research Centre. He received his Bachelor of Arts degree in Political Science and International Relations from Boğaziçi University. He is currently a MA student at Boğaziçi University in the same department. His research areas are as follows: International Regimes and Institutions, Turkish Foreign Policy, Environmental Politics.