While Russia currently provides India with 49 percent of its military imports, its closer ties with Pakistan, along with China’s increasing hostility towards India promise to reset future arms deals between the two countries. 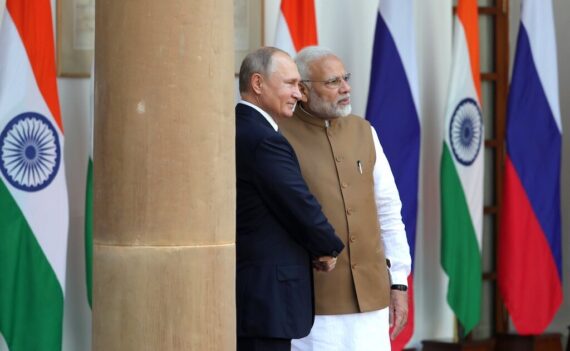 During the Cold War era, the Soviet Union was a staunch ally of India, with Moscow viewing the sub-continent nation as a bulwark against China and a cornerstone to expanding its empire into the Asia Pacific region, where the U.S. achieved unrivaled dominance at the conclusion of the Second World War.

When the Soviet Union collapsed in 1991, President Boris Yeltsin reiterated Moscow’s commitment to New Delhi by declaring Kashmir an integral part of India, while describing his country as a “Euro-Asian power” and admitting “the earlier [Soviet] relationship with India was seen in Moscow as a counterweight to the United States and China.”

In 2002, President Vladimir Putin reaffirmed this position by calling for a “triangle” alliance between India and China, arguing that “by strengthening the defense of India and that of China, we strengthen Russian security,” and in 2015 Russia’s Maritime Doctrine identified “strengthening relations with India” as one of its six regional priorities in the Indian Ocean.

Barely five years later, however, Russia’s policy towards India and South Asia has taken a 180-degree turn, as has India’s relationship with Russia and the United States, with New Delhi now firmly in the corner of Washington DC in what has been described as “Cold War 2.0” between the U.S. and China in Asia Pacific

When U.S. President Barack Obama announced his “pivot to Asia” in 2012 as U.S. military commitments in Iraq and Afghanistan drew down, it signaled the start of new contest for primary and hegemony in the region, pitting China’s regional ambitions against a United States that sees itself as the hegemon of a unipolar world, thus rubbing against Russia, which sees itself as one of a handful of dominant powers in a multipolar world.

Read: India and the S-400: US CAATSA Sanctions or a Waiver at the Door?

U.S. imposed sanctions against Russia for its invasion of Ukraine and annexation of Crimea in 2014, along with growing antipathy between Beijing and Washington DC has created a new and unshakable bond between Russia and China. In other words, as the U.S. pivoted to Asia, Russia pivoted to China.

“With China and Russia each locked in antagonistic trade and economic relations with the United States, the two partners have pursued policies intended to reduce Washington’s role as the preeminent actor in global trade and finance as well as its ability to use its leading position as an economic weapon,” observes Eugene Rumer, a former national intelligence officer for Russia and Eurasia at the U.S. National Intelligence Council.

Read: The Most Dangerous Place in the World and Its Ongoing Border Disputes

With Russia’s military and diplomatic efforts focused more on Europe, where it sees itself locked in a struggle to coerce and cajole former Soviet states into resisting NATO and European Union expansionism, Moscow has signaled that it’s willing to be a “hostage to China’s behavior,” according to Rumer, who says China’s policy in Asia is now essentially Russia’s policy, with Putin not allowing anyone or anything to put distance between himself and Chinese Communist Party Chairman Xi Jinping.

“No relationship matters more to the Kremlin,” argues Bobo Low for The Lowy Institute.

“China is much more than a bilateral partner; it is crucial to Putin’s grand enterprise of positioning Russia at the forefront of global affairs, the great middle power between the United States and China. For Moscow, the partnership is a force multiplier for Russian influence and status around the world, and is in large part the reason Russia enjoys an international prominence not seen since the fall of the Soviet Union.”

“The Russian amity offering a ‘blank cheque’, and geo-economic cooperation are unprecedented. The scope of the visit spanned economy, trade, energy, counter-terrorism, security/defence, education, and people-to-people exchanges,” he writes.

While Russia currently provides India with 49 percent of its military imports, its closer ties with Pakistan, along with China’s increasing hostility towards India promise to reset future arms deals between the two countries, as noted by former Indian National Security Advisor Shivshankar Menon, who warned last week that the India-China relationship will be marked by “hard times” over the next five to ten years, particularly because of India’s move to join the Quadrilateral Security Dialogue (QUAD), a fledgling or potential NATO like security agreement between it and the US, Japan and Australia.

These ever-evolving relations promise to change the way in which Russia views the dispute over Kashmir, given China’s recent military clash with Indian security forces in the Ladakh region during the past six months, but more importantly the ever-closer relationship between Islamabad and Beijing, particularly in Pakistan Administered Kashmir.

Parjanya Bhatt, a research fellow at Observer Research Foundation, Mumbai, rightly notes that while China and Pakistan do not share land borders, their “military and diplomatic collusion against India,” along with China’s geopolitical priorities in the region, “have brought them together” against India’s claims to Jammu and Kashmir.

Given these realities, and Russia’s reluctance to put any distance between it and China, it’s hard to imagine Putin or future Russian leaders reinterring the country’s earlier stated views on Kashmir, insofar as the disputed territory being an “integral part of India.”

With Russia’s military and diplomatic focus in Europe and the Middle East, as conflicts in Syria and Ukraine continue to strain its energy and resources, and with Moscow happy to outsource its foreign policy in South Asia to Beijing, it’s actions in the region will be confined to the sale of its natural resources and weapons on a bilateral and transactional basis, with India importing $11 billion per year in Russian energy and arms, and Pakistan recently executing a $10 billion oil pipeline deal with Russia in 2019.