The people of Jammu&Kashmir do not engage in border disputes with each other. They wait for a plebiscite, promised by the international community, so they are able to decide their sovereignty. 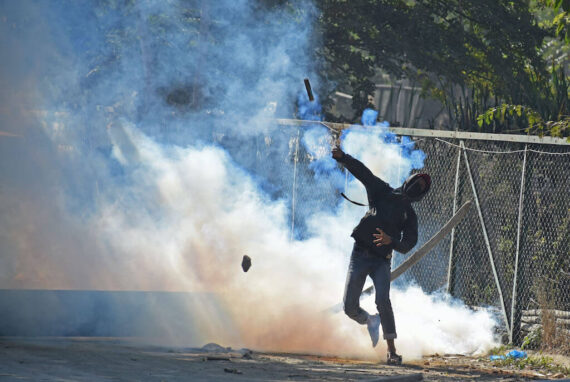 A protester returns a tear gas canister fired by Indian police near the gun-battle site in Barzulla area of Srinagar, Kashmir, India on October 12, 2020. Photo by Faisal Khan, Anadolu Images

In many respects, border disputes are a feature of the modern nation state. At the end of the colonial period, the formation of international boundaries often cut across historically connected communities with shared heritage and common culture.

The division of natural terrain by cartographers, using a pencil and ruler to draw straight lines on a map for the redistribution of territories led to – at best resentment by the traditional custodians of such lands, and at worst – outright wars over the sovereignty of territories.

In some cases, borders have been created within erstwhile states – as seen with the division of Ireland, Palestine and the case study here – Jammu & Kashmir (J&K).

Furthermore, in discussing contemporary cross border tensions, Rongxing Guo reminds us that many boundaries are in fact “fuzzy”, in other words, lack coordinates or quantifiable demarcations on the ground, leaving room for claims over the rightful ownership of land – and thus conflict. Guo summarizes the main factors contributing to the escalation of border disputes between nation states as; “resource scarcity, locational feature [or characteristics], domestic politics, geopolitical competition and cultural difference”.

Using these factors as reference points, this article adds important context to the long-standing border conflicts between nuclear powers – India and China and India and Pakistan, in the disputed territory of J&K.

Until 1947 J&K was an autonomous state ruled by a monarch, who was instructed by the British to merge with either India or Pakistan. This led to military interventions by India and Pakistan, resulting in both taking control of parts of the state and three subsequent wars. In 1962, India and China also went to war over a portion of the territory.

It was due to the magnitude of the territorial dispute that Bill Clinton referred to J&K as the most dangerous place in the world. The military standoffs between India and Pakistan on one of J&K’s borders or ceasefire lines – known as the Line of Control (LoC), frequently make international headlines reporting deaths of army personnel and civilians.

Whoever controls J&K controls the source of the water so desperately required by both states for consumption, agriculture and more pressingly, the generation of electricity through hydropower projects (or dams).

India and China clashed on J&K’s eastern border, known as the Line of Actual Control (LAC) several times during 2020, with incidents in June resulting in 20 Indian deaths, and in September, firing from both sides reported.

J&K is resource rich, with minerals, precious gems, forests and, significantly, water. When the snow on its mountains melts, it flows into the rivers providing a lifeline to both neighboring India and Pakistan. Whoever controls J&K controls the source of the water so desperately required by both states for consumption, agriculture and more pressingly, the generation of electricity through hydropower projects (or dams).

Characteristics of the border location

When Indian and Chinese troops clashed at the Galwan Valley in June 2020 some reports claimed it was a result of natural processes common within the location, such as the aforementioned melting of snow and changes to rivers and lakes, which led to the faceoff of soldiers along the poorly defined 3,440km border. The border along the LoC is also highly problematic due to cutting across rivers, villages and high peaks.

The repatriation of two sisters who mistakenly wandered into the Indian controlled side of the LoC was reported as a good news story; however, fatalities along the border can occur on a weekly if not daily basis during periods of tension from cross-border shelling and landmines.

Family members of the youth killed in Lawaypora stage a protest in Srinagar on January 04, 2021, demanding the bodies of their relatives. Photo by Faisal Khan, Anadolu Images

Border skirmishes between troops can distract from larger regional issues often hidden behind episodes of aggression, such as geopolitical competition and economic allying. The building of infrastructure in the form of highways and rail tracks along the LAC by India was reported to trigger concerns by China.

Yet China has been engaged in an ambitious project with India’s rival Pakistan for a number of years. The China-Pakistan Economic Corridor (CPEC) has built roads through Gilgit Baltistan, in Pakistani controlled J&K, which India lays claim to (along with the rest of the divided J&K).

CPEC allows China to access the Arabian Sea to export goods, via Pakistani administered J&K and into mainland Pakistan, where it has built a port in Gwadar. China and Pakistan’s diplomatic relations have been strengthened by the endeavor, with the former becoming an even more important ally for the latter in its own border dispute with India.

In February 2019, a suicide bomb killed 49 police officers in Palwama, Indian Controlled J&K. India’s ruling Bharatiya Janata Party (BJP) blamed Pakistan for the attack as an act of state sponsored terrorism and declared threats of war in retaliation. Yet Pakistan fervently denied any involvement, with one media outlet claiming that the “Palwama drama” was “a conspiracy”. As bizarre as it may sound, many within India believed the attack was in fact a way for the BJP to flex its political muscle by standing up to Pakistan in order to boost electoral advantage.

Creating friction with Pakistan, in this view, was merely a political strategy. Theorist such as Ariel Zellman describe how democratic leaders can gain credibility with their electorates through “extreme policy positions” regarding international disputes. This can entail reigniting a dispute and/or emphasising threats to national security. In other words, border disputes can be useful for domestic political gain.

Guo describes how cultural differences between hostile nations can exacerbate border disputes. He writes, “race, ethnicity, language and religion have divided states into separate political entities as much as physical terrain, political fiat or conquest.”

In the case of Indo-Pak relations, religion is the differentiator, given the partition of British India and creation of Pakistan was to provide a homeland for the Muslim minority. The fact that J&K is a Muslim majority state under Hindu majority control has been the core rationale for Pakistan’s claim over the territory.

In 2014, the aforementioned BJP gained power with their right wing ideology known as Hindutva, which emphasises Hindu superiority. Collective identities like national identities are bolstered against a perceived ‘other’ – in this case, the Muslim minority within the Indian boundaries, as well as the Muslim neighbor with which the country shares a border dispute.

This is of course a trend noted in other parts of the world with the rise of nationalism, which has consequences for state minorities as well as regional and even global relations.

Read: The rise of BJP in India coincides with the rise of Hindu nationalism

What is glaring in this particular discussion of border disputes is that the main stakeholders – namely the people of J&K, whose territory is fought over and homeland has become a battleground for neighboring nuclear powers – have been removed from formal international processes for dispute resolution.

The people of J&K do not engage in border disputes with each other. On the contrary, they wait for a plebiscite, promised by the international community, so they are able to decide their sovereignty. Only when the dispute is resolved, will divided families across the enforced borders be able to meet, historical links be re-established and the constant threat of death and destruction be removed.

Serena Hussain is a Sociologist and Human Geographer. She is currently an Associate Professor at the Centre for Trust, Peace and Social Relations. Serena has worked as an expert consultant for a number of British government departments, with organisations such as Ipsos MORI and the BBC World Service; and INGOs, like Islamic Relief Worldwide.
Her recent book, Society and Politics of Jammu and Kashmir, published by Palgrave was described as 'one of the most meaningful endeavors toward moving the conversation forward' by the High Representative to the United Nations Alliance of Civilizations.