Many Russians have been excluded from international events because of their nationality, and many Russian businesses have been attacked. 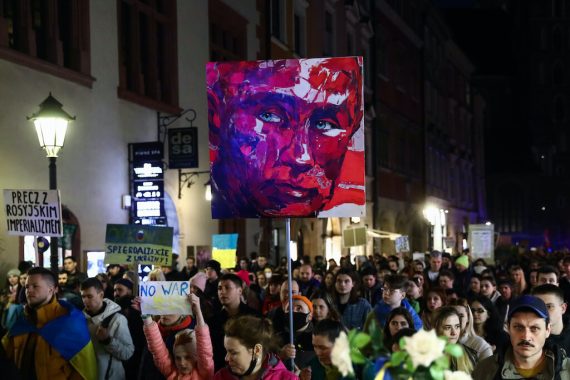 People take part in a march to protest against Russian attacks on Ukraine, on March 24, 2022 in Krakow, Poland. Photo by Stringer. Anadolu Images.

In Switzerland, people filed a petition calling for the deportation of Olympic gymnast Alina Kabaeva, Putin’s alleged mistress and mother of four of his children, drawing 70,828 signatures as of Sunday, March 26, 2022. The petition reads, “It is time to reunite Eva Braun with him,” in reference to Putin.

Kabaeva responded to the petition with dismay and anger, describing it as embarrassing and adding that “there has never been a more shameful page in the history of world sports.”

Kabaeva is the latest victim, among countless others, of rising Russophobia. Thousands of Russian art workers, businesses, and businesspeople face pressure either from Russia or from countries that oppose the Russian invasion of Ukraine. It’s not only businesses under pressure but also Russian culture.

Shortly after the Russian occupation of Ukraine, anti-Russian opposition began to rise in the Czech Republic. Attacks targeted Russians in the country. Some social media users went too far and made statements such as “It would be nice to somehow mark Russian citizens with a red star.”

Russians were stigmatized and attacked just because they spoke their language. Martin Dlouhý, a professor at the Prague University of Economics and Business, wrote on Facebook on February 24, 2022, that he would not conduct, test, or correct the final thesis of Russian students “due to conscience and moral principles.” Dlouhý deleted the tweet after the backlash.

Czech hotels refused to host Russians. Russian children were attacked in schools, and a woman was kicked out of a taxi just for speaking Russian. Maison de la Poutine restaurant said it received insults and threats after Russia invaded Ukraine—this was because the restaurant is exactly pronounced the same as Putin (Poutine).

Read: Where Does Central Asia Stand on Russia’s War in Ukraine?

Russia’s star conductor Valery Gergiev was forced to speak out against the Russian invasion of Ukraine, given a deadline and threatened with being fired from the Munich Philharmonic. When the deadline expired and Gergiev did not condemn Vladimir Putin, he was replaced for three weekend performances by the Vienna Philharmonic at Carnegie Hall, which also canceled two performances where Gergiev would lead the Mariinsky Orchestra in May. He was also removed from two Vienna Philharmonic performances in Naples, Florida.

Denmark’s Municipality of Aarhus canceled the Russian opera singer Anna Netrebko’s concert, citing her support for Putin. The Metropolitan Opera announced that anyone who supports Putin will not be able to take part in the opera forcing Netrebko to withdraw from her performance.

The Cardiff Philharmonic Orchestra followed, announcing on March 9 that it will not play the work of Russian composer Tchaikovsky due to the conflict in Ukraine.

Read: Intelligence in the Russia-Ukraine War

Performances by Russian pianist Alexander Malofeev were canceled. His condemnation of the war in Ukraine did not help prevent the cancellation of concerts in both Montreal and Vancouver.

The University of Milano-Bicocca in Italy responded to the Russian invasion of Ukraine by canceling a lecture on Russian novelist Fyodor Dostoevsky. In response, a street artist painted an image of Dostoevsky on a university wall in protest.

Kirill Sokolov, a filmmaker of Ukrainian roots, was excluded from the Glasgow Film Festival despite his anti-war stance because his film has received Russian state funding, according to a spokesperson of the festival.

Many Russians have been excluded from international events because of their nationality, and many Russian businesses have been attacked.

In Tokyo, the Russian shop “Aka no Hiroba” was the target of vandalism. Despite promoting peace since the beginning of the war, it did not escape hate attacks.

Not only Russians but also animals living in Russia got their share of sanctions. The Fédération Internationale Féline, an international federation of cat registries founded in France banned Russian cats from participating in its events due to the war.

Cyberspace and technology became a part of the anti-Russia campaign as well. The Organized Crime and Corruption Reporting Project launched the “Russian Asset Tracker,” a database to track the assets of prominent Russians with ties to Vladimir Putin.

Social media giant Meta allowed users to engage in hate speech against Putin and Russian forces. A Meta spokesperson said, “As a result of the Russian invasion of Ukraine we have temporarily made allowances for forms of political expression that would normally violate our rules like violent speech such as death to the Russian invaders. We still won’t allow credible calls for violence against Russian civilians.”

Hate speech and acts of vandalism are only harmful

With the Russia-Ukraine war, Cold War-like hatred of Russia has reignited and spread to many countries, which could lead to biased politics and prejudiced. Many institutions and organizations are softening the enforcement of laws against hate speech targeting Russians. Although some people in Russia say that they are against the Ukrainian war, they cannot avoid being excluded from many international events simply because they are Russian.

There is a danger that the acts of vandalism and attacks on Russian culture could cause more hatred and make Russians more nationalist. Attacking a person or institution because it is Russian or looks Russian does not mean solidarity with Ukraine: it is a form of Russophobia. It also does not fall under freedom of expression.

Hicran Çokyaman holds an undergraduate degree in International Relations from the Erciyes University and an MA degree in the same field from Çukuruva University. She is currently continuing her PhD at Sakarya University. Her areas of interest are International Politics, Globalization, Conflict Resolution, Gender and Migration.