China is the likeliest beneficiary of Russia’s isolation. In Central Asia, Beijing’s regional presence will increase even further. 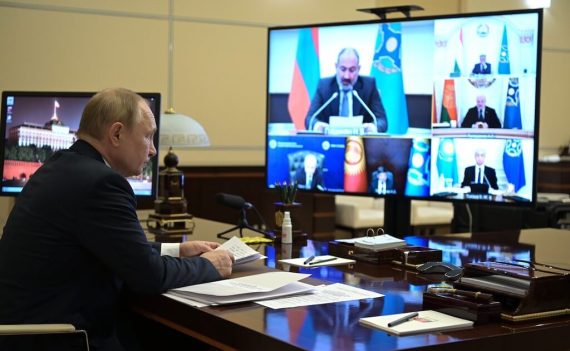 The Extraordinary online meeting of Collective Security Treaty Organization (CSTO) held regarding the unrest in Kazakhstan, on January 10, 2022 in Moscow, Russia. Photo by Kremlin Press Office via Anadolu Images

On February 24, in the morning, following Russian President Vladimir Putin’s public address to the nation, Russia launched its so-called special military operation, which has proven to be a full-scale invasion and war, never officially declared as such by Moscow.

On a declarative level, the “special military operation” had three main goals. First, the protection of the self-proclaimed People’s Republics of Luhansk and Donetsk, which were formally recognized by Russia on February 21, as the two manufactured breakaway entities that formally asked Moscow for military assistance.

Second, the de-militarization of Ukraine, which, de-facto meant erasing Ukraine’s military potential which has grown after 2014. Third, the so-called de-Nazification of the country, not clearly explained in Russian sources, which arguably means “cleansing” the country of allegedly anti-Russian political and intellectual forces.

In reality, however, in launching its military offensive against Ukraine, Russia’s strategic goal should be viewed as follows: further dismemberment of the country—ideally breaking it up into two separate and, perhaps, loosely connected entities based on geographic and ethnic-linguistic principles—and the restoration of a pro-Russian puppet government, potentially led by Ukraine’s former president Viktor Yanukovych who fled to Russia in 2014, which will be completely subordinate to the Kremlin’s will. If Russian goals and objectives with regards to Ukraine are to be accomplished, the country is likely to cease to exist.

While Russian armed forces are muddling through Ukraine’s outskirts reportedly suffering unprecedentedly high military losses in Russia’s post-1991 history and the Russian economy is nearing the brink of collapse as a result of heavy economic sanctions imposed by the U.S., the EU, their allies, and regional partners, many large brands (more than 150) have walked out of the Russian market. Now, Russian political leadership is reportedly seeking ways to garner international support to legitimize its actions in Ukraine.

Aside from Belarus, which has found itself in a complete dependency on Russia both economically and politically, Russia’s seemingly best bet in terms of drumming international support could come from other members of the Collective Security Treaty Organization (CSTO) and members of the Central Asia macro-region.

Specifically, in its geopolitical game Moscow could try to approach Kazakhstan, Tajikistan, and Kyrgyzstan while given the traditionally evasive position(s) of Turkmenistan and Uzbekistan, approaching these countries would not make much sense for Moscow. Yet, despite established economic and security ties, that option might not be as easily achievable as it may seem.

Even prior to launching his military offensive against Ukraine, Putin approached President of Kazakhstan Kassym-Jomart Tokayev on February 22. While all the details remain unknown, it was reported that during their conversation, Putin reminded his foreign counterpart about the role played by the CSTO (and Russia in particular) in supressing public revolts in the country in the beginning of 2022, when Kazakh leadership had to call on the CSTO’s assistance.

Later the two presidents had yet another conversation, where issues related to “strengthening strategic partnership” and a “special military operation in Ukraine” were discussed. It was rumored among the experts that Putin might have attempted to convince Tokayev to join Russia’s aggression against Ukraine, perhaps, within the scope of a CSTO mission or in any other form.

However, Tokayev adamantly refused to send Kazakhstani troops to Ukraine. Moreover, he blamed the “refusal to follow the Minsk Agreements”—without actually pointing to the culprit—as the main source of the “developments in Ukraine.”

Apparently, Tokayev’s position was a negative surprise for Putin, who counted on a much more cooperative attitude given Russia’s role in dealing with public protests earlier this year. Thus, it is highly likely that Kazakhstan, which has been able to preserve strategic distance from all regional/global centers of power, will not become embroiled in the Russia-spurned war against Ukraine.

Moreover, Russia’s growing international isolation, which is turning the country into an international pariah and a “toxic” partner, will make the Kazakh leadership act even more cautiously, potentially, articulating its leaning toward other actors, such as China and Turkey, even stronger.

Added to this, an armed conflict against a neighboring state (Ukraine) under the guise of “protecting the Russian-speaking population,” which greatly disturbed Kazakhstani authorities back in 2014, especially in light of Russia’s rhetoric, should be a great source of uneasiness for Kazakhstan —even though this may not be publicly declared.

Tajikistan and Kyrgyzstan are other Central Asia actors on whose support Russia could theoretically count on. However, things are all but simple with these two states as well.

Tajikistan, which is also a member of the CSTO and a country dependent on Russia economically and for security, was approached by Russia shortly after the outbreak of the war. On February 27, during her visit to Dushanbe, Valentina Matviyenko, chairwoman of the Federation Council of Russia’s Federal Assembly, stated that relations between the two countries “have stepped to a new level of strategic partnership.”

Yet, following this meeting, Tajikistan cancelled all flights to a number of Russian cities, at the same time refraining from giving any further comments on Russia’s aggression against Ukraine.

Another member of the CSTO, Kyrgyzstan, which is also a member of the Russia-led Eurasian Economic Union, took an extremely reserved stance as well, distancing itself from the conflict. In regard to these two states and their reaction to the Russo-Ukrainian war, it makes sense to underscore two aspects.

First, a recent border clash in April 2021 between Tajikistan and Kyrgyzstan that resulted in dozens of casualties demonstrated both the weakness of the CSTO and the evasiveness of Russia’s position—a reality that was hailed neither by Tajikistan nor Kyrgyzstan.

Thus, most likely, the reserved reaction by both countries now might, at least in part, be owing to that. Second, the abovementioned border crisis identified yet another trend that is likely to grow:  the increasing influence of Turkey in Central Asia, especially in light of Russia’s reckless behavior in the post-Soviet space and Ankara`s extremely well-calculated and balanced approach.

Finally, analyzing the impact of the Russian aggression against Ukraine and its impact on Central Asia from a more macroregional/global prospective it makes sense to highlight yet another aspect. Russia’s embroilment in Ukraine, its political and economic isolation, and the decreasing presence of the U.S. in the region (particularly visible after its withdrawal from Afghanistan), make China the likeliest winner of this whole situation.

In addition to remaining Russia’s only strong economic partner—incidentally, Beijing is also not breaking ties with Kyiv and/or Western powers—China is the likeliest beneficiary of Russia’s isolation. For Central Asia, this also means that Beijing’s regional presence, already strong, will increase even further.