Separation in the Age of Remote and Robotic War

Automation is never automatic. It is a form of labor at the heart of which is erasing the very subject whose violent dreams machines are meant to realize. 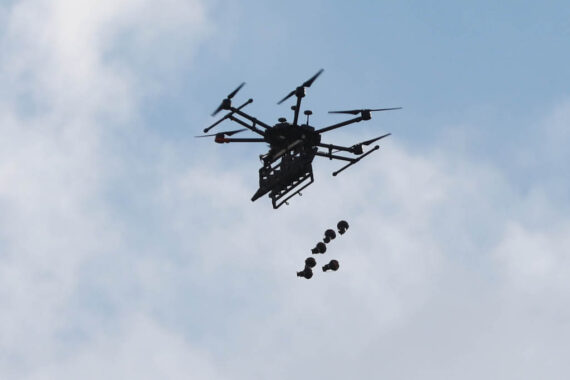 To the majority of Palestinians, the settler-colonial encounter is primarily, if not exclusively, an encounter with weapon power. That to me is one of the most inescapable philosophical provocations of what Rashid Khalidi called “the hundred years’ war on Palestine”.

Since the second decade of the Twentieth century to today, the (re)production of masses of Palestinians as the hosts and hostages of zones of encounter with arms has been the condition of Israeli existence, citizenship and sensoria, national history and spatiality.

Be it through fracturing the Palestinian body politic into occupied territories, besieged camps, and enemy entities, or fracturing Palestinianess itself into different categories of compromised existence that “magnetize” state violence—making the exercise of weapon power the sole practicable option for Jewish statehood and sovereignty has been the choice of consecutive Israeli governments whose legitimacy has been intrinsically tied to making this choice go unmarked.

That is the underwriting logic for what has passed as “politics” between the river and the sea and beyond in those hundred years which is no more than the martial art of making Palestinians available as a genre of the human that can only be accessed and expelled from view by weapons while securing the Israelis unlimited possession and use of these martial technologies.

So is the case because weapons make possible the destruction of all social and political relations except for the relation of enmity that justifies the zero-sum logic of settlement and separation according to which it is either “them or us”.

Generations of Palestinians, particularly those in the West Bank and Gaza, have and continue to experience the reinscription of this logic every time they interact with armed settlers, be they in uniform or out of uniform. The Israelis have made that this violent interaction is the rule that the “settler” as an anthropological figure appears as no less than a combination of a human-weapon assemblage in Palestine.

Nowadays however, particularly in Gaza, the inhuman character of settler colonial war has been pushed further by the introduction of remote and robotic technologies. Weeks, months, if not years can go by without an inhabitant of Gaza encountering a settler, but they are more likely to encounter a faceless machine in their day to day life. These machines can be remotely controlled from a distance by an operator or autonomously through robotic means.

Israel’s arsenal includes both types which range from the airborne all the way to the subterranean. Many are mobile like the “Black Thunder” remote-controlled bulldozer and the “Guardium” ground drone developed by Israel Aerospace Industries. Others are stationary, though movable installations, like the autonomous missile interceptor the Iron Dome, and the “Roeh Yoreh” (Sees-Fires in Hebrew)—both products of Rafael Advanced Systems. Gun boats, surveillance balloons, skunk water canons, small drones equipped with sniper rifles and smoke grenades, and subterranean robots that operate in tunnels are also part of the this growing arsenal.

In practice, most of Israel’s unmanned war operations involve automatic procedures that require little to no “human interference”. For example, a number of Israeli medium and large size aerial drones are equipped with autonomous take-off and landing capabilities, automatic piloting on pre-programmed paths, object and terrain scanning softwares for the identification of targets, as well as the use of algorithms to match targets with ordnance in order to maximize the speed and quantity of destruction.

In fact, the Israelis, like other users and developers of these machines (namely the United States), place remotely-controlled weapons on an evolutionary trajectory towards full automation, merchandizing their work of death as the inevitable conclusion to the course of technological innovation.

They index their progress according to sanitizing classifications of the human-machine interface that foretell a gradual yet linear ejection of settlers from the machinations of martial governance, progressing from “humans in the loop” where soldiers are involved in the selection and execution of targets, to the “closed-loops” of full machine autonomy where target identification and elimination is strictly an algorithmic process executed by mechanical agents.

Read: Why Did the United States Add Israel to CENTCOM?

Indeed, the official plan of the Israeli state is to increase the population of these machines and diversify them “to develop a system that fits a wide range of missions in the field …[that] can help the IDF control populated areas for extended periods of time” while minimizing the amount of training and resources required to do so. Programs to unman two-thirds of the Israeli air force, and a third of the military’s ground war machinery in the next five to ten years are put in place to carve out death-worlds “where autonomous soldiers could carry the weight in the war [my emphasis]”.

Of course, these classifications are not ontologically, ethically, or legally neutral. However, what they show more than anything is that in the robotic era of war, the Israeli mode of problematizing Palestinian-Israeli relations has so far been reducible to the question of reengineering the relation between the settler and the weapon.

Can the labor of making the Indigenous disappear be outsourced to machines? What happens when Palestinian existence is mediated (or made invisible) by robotic weapons? Can martial rule over millions of people become an autonomous architecture of the settler polity rather than a matter of political deliberation and sovereign decision-making?

These are the question that seem to be shaping a new form of mechanized apartheid which, taken to its final conclusion, would see the Palestinian as no more than an object, a digital phantom to be contained, controlled, and killed by machines but never encountered as a subject.

Like the Palestinians, together and apart, entire populations are being dragged into a droneworld that contains their existence. The new martial dream incited by these machines is no longer one where exploitation can limit the unilateral detriment and destruction to which peoples can be exposed.

Rather, the forces of separation that have taken over the contemporary world see no problem in making exploitation obsolete as long as they can automate labor and extract value from the robotic technologies of cruelty they produce. One thing to keep in mind though is that automation is never automatic. It is a form of labor at the heart of which is erasing the very subject whose violent dreams machines are meant to realize.

Ali H. Musleh is a PhD candidate and a lecturer in the Department of Political Science at the University of Hawai’i at Manoa.