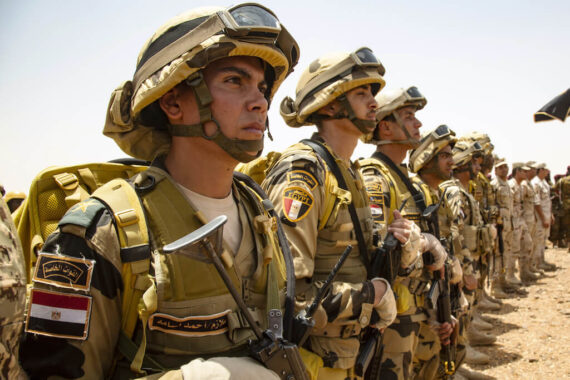 On the last weekend of May, Addis Ababa Stadium was filled with thousands of energized demonstrators, protesting foreign interference in Ethiopian internal affairs.

The event was meant to be directed at growing American pressure (including sanctions) on Ethiopia to end its war in Tigray, but Ethiopia’s Grand Ethiopian Renaissance Dam (GERD) dispute with Egypt also featured large.

Speeches were made in Arabic and posters about Ethiopia’s right to use the Nile were abundant in an event that appeared directed as much at Egypt as it was the United States.

Whilst the demonstration was ongoing, Sudan hosted a military exercise with Egypt which included the land, naval, and air forces of both countries, not so subtly dubbed “Guardians of the Nile.”

The tensions between Ethiopia and the downstream countries over the Nile have drastically increased as Sudanese officials accuse Ethiopia of beginning its second filling of the Grand Ethiopian Renaissance Dam scheduled for this month.

Sudan has said the second filling threatens its national security, with Egyptian President al-Sisi ominously warning of “unimaginable instability” if Ethiopia proceeds without an agreement.

Earlier in June, Egyptians were angered when Ethiopian Prime Minister Abiy Ahmed said his country plans to build hundreds of more dams across Ethiopia prompting a sharp verbal riposte. But Sudan and Egypt have long gone beyond limiting their responses to words.

Sudan’s civilian & military leaders appear to have adopted a twin policy of military pressure at the border in the al-Fashqa region (with Egypt’s encouragement) alongside attempts to expand the number of actors which are party to negotiations to find a solution. Sudan has however recently dialed back, signaling its openness to an interim agreement.

Egypt’s efforts, however, have been far more comprehensive. Last week the Arab League was convened by Egypt and Sudan in Doha at the ministerial level where Egyptian FM Shourky was successful in soliciting the support of Arab countries to raise the issue with the United Nations Security Council.

Just as Ethiopia mobilized its mufti’s to give religious legitimacy to its position, Egypt’s Al Azhar, one of the Muslim world’s most prestigious institutions, has also sprang into action sharply condemning Ethiopia’s policy with an argument also couched in Islamic terms.

“Depriving others from benefiting from these natural resources is an act of oppression and aggression on Allah’s provisions” said Shaykh Ahmed al Tayeb.

But whilst the clerics probe the religious legitimacy of these policies Cairo has also thrown its full weight behind re-developing political, military and humanitarian ties with Ethiopia’s neighbors in a diplomatic blitzkrieg to isolate it.

Read: All-Out-War between Ethiopia and Sudan on the Doorstep?

Following the 2013 military coup which overthrew former president Mohammed Morsi, Egypt had years of diplomatic absence in African forums and indeed the Middle East. Cairo turned inwards, generally following the lead of Abu Dhabi and Riyadh, whilst paying less attention to its own neighborhood.

Abdal Fattah al-Sisi, unlike Morsi, put more faith in negotiations with Ethiopia, initially dialing back the rhetoric. In 2015, the countries signed the Declaration of Principles of the Grand Ethiopian Renaissance Dam, which was expected to lay the foundation for a broader agreement with then Ethiopian PM Hailemariam Desalegn.

When Desalegn told al-Sisi that “the Renaissance Dam will not cause any damage to our three states and especially to the Egyptian people,” al-Sisi apparently believed him.

Faith in that promise remained despite a seismic shift in Ethiopian politics when Abiy Ahmed became prime minister in 2018. During a light-hearted press conference, shortly after he assumed office, the Egyptian president asked Ahmed to repeat the following in Arabic: “By Allah, by Allah we shall not cause any harm to Egypt’s water.”

VIDEO: Why is the Grand Ethiopian Renaissance Dam So Controversial?

That approach however didn’t appear to yield the results Cairo wanted drawing sharp criticism. Mohammed Ali, an influential Egyptian opposition figure in exile, called upon Egyptians to take to the streets in a “Nile Revolution” and overthrow Sisi’s regime for not protecting Egyptian water rights.

Outsourcing its foreign policy to countries which didn’t share Egypt’s primary security concerns left Egypt facing serious threats which it hadn’t prepared itself to manage, and ultimately forced Egypt to review its approach.

Egypt’s decision to begin normalizing relations with Turkey earlier this year was an indicator that things were beginning to change despite hiccups on that front. “Egypt is realizing it is its own man; it cannot rely on any ‘big brother’ whether it be Abu Dhabi or anyone else,” Jalel Harchaoui said.

Eritrea, a country closely allied with Egypt, signed a peace treaty with Ethiopia with which it fought a brutal war in the late 90s leading to a standoff that Ahmed overcame in a gesture which won him the Nobel Peace Prize.

In Sudan a revolution swept away the regime of Omar Bashir, with civilian rule emerging initially as a distinct possibility which Abiy Ahmed supported through mediation.

When the war in Tigray started however, the battle lines were re-drawn, and all assumed their new roles in the Horn of Africa’s new geopolitical matrix.

Ethiopia’s goodwill with Sudan went up in embers when Sudan moved its troops into the farmland of the al-Fashqa region, ejecting Ethiopian Amhara militiamen & farmers whilst it adopted a more assertive posture on its issues with Ethiopia’s dam.

The Egyptian military exercises with Sudan in May were the second since November last year, with Mohamed Farid, Egypt’s chief of staff, commenting on the high combat readiness of both countries to face what he ominously called “shared threats.”

In late May, Egypt’s chief of staff went to Nairobi where he signed a technical agreement on defence cooperation with Kenya, the fourth such agreement between Egypt and East African countries.

Read: Sudan and the Nile Spring: Raptures of Hope and the Uncertain Road Ahead

In early April, the Egyptians signed an intelligence sharing agreement with Uganda explicitly referencing the challenges in the Nile. In the same month, Egypt also signed a military protocol with Burundi. Egypt and Sudan deepened their military cooperation in March this year.

Egypt’s charm offensive hasn’t just been in the military domain, however. In late May, al-Sisi visited Djibouti, the first visit of an Egyptian head of state to the country, following which Egypt sent medicine, medical supplies and food aid. After the meeting Djibouti’s president called for a “fair and binding legal agreement” on the Nile dispute, an Egyptian demand that Ethiopia has rejected.

Egyptian aid packages have also been regularly delivered to South Sudan, which al-Sisi visited in November last year with his head of intelligence to meet his counterpart Salva Kiir. That was also a first for an Egyptian head of state.

An unverified report quickly denied by South Sudan’s government also said Egypt intended to establish a military base in a South Sudanese town near the Ethiopian border.

Whilst President Biden has attempted to adopt a more constructive and balanced approach than his predecessor, Egypt’s efforts to broker a ceasefire between Hamas and Israel will almost certainly endear al-Sisi to Washington.

Ethiopia on the other hand appears increasingly isolated. This comes at a time where relations between Washington & Addis Ababa have sharply deteriorated because of the violence of the Tigray war & American sanctions on Ethiopian officials.

VIDEO: Ethiopia Dam Dispute: How to solve it?

Talks to find an amicable solution to how these countries will share the Nile have gone on for over a decade without a workable solution. Egypt and Sudan want a legally binding agreement which protects their share of the Nile, whilst Ethiopia argues that such an agreement would infringe on its sovereignty.

How the talks are to be conducted have also been subject to dispute. Sudan and Egypt want outside powers to take part including the EU, the UN & the U.S., whilst the Ethiopians prefer the African Union umbrella.

The Biden administration has appointed Jeffrey Feltman as its special envoy to the Horn of Africa, and solving GERD is one of his top priorities as he shuttles between the region’s capitals to lobby and build consensus for a path forward. If he can succeed where others have failed is yet to be seen.

Whether he does or doesn’t however, one fact is becoming increasingly difficult to ignore. Egypt is no longer likely to sit idly as its water interests are threatened and is taking matters into its own hands.

Faisal Ali is an Istanbul based multimedia journalist & writer focussed on East African politics. You can follow him on Twitter @fromadic92