Even if Iran and Saudi Arabia reach a peaceful settlement in their regional conflicts, the deep mistrust between them is likely to continue. 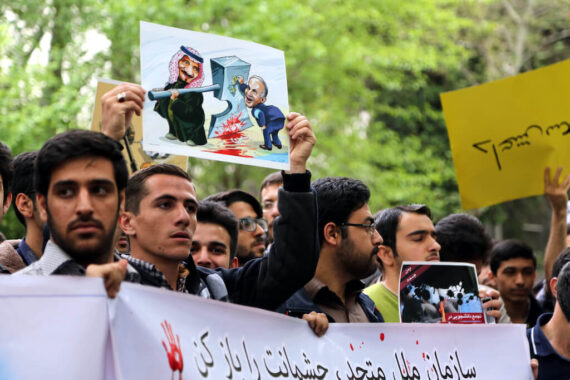 A group of people, including mostly Yemeni and Iranian Student gather outside the United Nation's office building during a protest against Saudi-led operations against Houthis in Yemen, on April 16, 2015 in Tehran Iran. Photo by Fatemeh Bahrami, Anadolu Images

On April 18, news of Iran-Saudi Arabia talks to re-establish relations was reported in the media. Aside from the veracity of the news, recently there have been bilateral signs of softening. Both countries have their reasons that drive them to the negotiation table.

The Saudi-Iranian relations, although improved for a short period in the 1990s, cooled off with the geopolitical shift in the Middle East following the U.S. invasion of Iraq in 2003. The rise of pro-Iranian politicians in “new” Iraq increased Iran’s role in the country’s turbulent politics, an influence that gradually expanded with the U.S. withdrawal from Iraq in 2011.

However, the Arab Spring has put Iran and Saudi Arabia in a paradoxical situation. While considering the protests in Tunisia, Egypt, Yemen, Bahrain, and Libya as a phenomenon inspired by its Islamic Revolution of 1979, Iran regarded the mass protests in Syria and Iraq as a conspiracy initiated by its enemies: the Zionists, the West, and their regional allies like Saudi Arabia and the UAE.

On the other hand, Saudi Arabia tried to seize the opportunity and, in an obvious contradiction, perceived the Syrian revolution as the people’s democratic right while considered the protests and events in Yemen, Bahrain, and Lebanon a result of Iranian intervention. Thus, the fierce proxy war between the two sides became inevitable.

It is clear that the hostile policies between Iran and Saudi Arabia are due to their pragmatic thinking. The two countries have always tried to prevent each other from acquiring more power by giving money and weapons to their governmental and non-governmental allies. The war in Syria caused the two to enter into a fierce proxy war; however, as the war entered an erosive stage, military spending on both sides increased sharply.

Iran tried to keep the Saudis busy by expanding the scope of the conflict to other areas like Yemen.

Iran tried to keep the Saudis busy by expanding the scope of the conflict to other areas like Yemen. There were even large-scale demonstrations and clashes in the Eastern Province of Saudi Arabia, which Saudi officials perceived as a result of foreign intervention, implicitly accusing Iran. Eventually, the Saudi influence in the Syrian war gradually declined after 2015 as they became heavily involved in the war in Yemen against the Houthi group, which maintains close ties with Iran.

The continuation of hostilities between Iran and Saudi Arabia has led to unpleasant results. The humanitarian crisis in Yemen has tarnished Saudi Arabia’s prestige. After six years of intense conflict in Yemen, Saudi Arabia has faced severe international pressure in addition to not being able to achieve its desired results.

The heavy cost of the war in Yemen and the increase in military spending, along with falling oil prices and the COVID19 pandemic, have led to a downturn in the Saudi economy and a budget deficit. Additionally, the competition with Iran has caused the latter to make its influence in the Middle East persistent by forming proxy groups, while the main goal of Saudi Arabia was to eliminate Iran’s influence.

Although Iranians have gained a lot of experience in fighting regional rivals, the overall consequences haven’t been favorable for the country. Iran sees the wars in the region as a conspiracy to curb its influence in the Middle East, and as a result, believes that groups such as Daesh (ISIS) and Jabhat al-Nusra were formed by Saudi Arabia and its regional and international allies. Therefore, Iran has to defeat its enemies in erosive battles outside its borders.

However, the outcome of the bloody wars has shown that this policy isn’t sustainable for either country. Increasing Iranian influence has led neighboring Arab countries to seek refuge in Iran’s number one enemy, Israel. In addition, Saudi Arabia, due to its influence in the Arab world, has been able to seriously disrupt Iran’s relations with other Arab countries.

For example, after the attack on the Saudi embassy in Tehran in 2016, Saudi Arabia encouraged Arab countries to close down their embassies in Tehran. Coinciding with the former U.S. President Donald Trump taking office in the United States, international pressure and sanctions on Iran increased to a high level and Saudi Arabia encouraged the United States and other Western countries to intensify pressure on the country.

The possibility of the formalization of Saudi Arabia’s relations with Israel poses a double threat to Iran.

Further efforts were made to re-establish relations between Iran and Saudi Arabia following an attack on a Saudi Aramco facility in September 2019. Even before this attack, the Iranian foreign minister had signaled that a “non-aggression pact” with Saudi Arabia and its allies was offered. The attack on Aramco showed the ability of Iran’s allies to reach the depths of Saudi territories.

However, after the attack, which put the two countries at risk of direct confrontation, Iran softened its approach towards Saudi Arabia. It is even said that General Soleimani, who was assassinated in Baghdad by the U.S. military, was carrying a message to Saudi officials during his visit to Iraq.

Saudi Arabia seems to have softened its stance as a result of the Houthis in Yemen targeting of its infrastructures almost daily. The purpose of these tactical attacks, which seem to have been somewhat successful, is to force Saudi Arabia to stop attacks on Yemen and to negotiate with Iran. Along with this, the pressure by the Biden administration on Saudi Arabia has made Saudi officials more flexible with Iran.

Today, with the resumption of Iran’s talks with the P5+1 group, there is a possibility that with the return of Iran and the U.S. to the nuclear deal, Iran will offer more support to the Houthis, who have been in control of Yemen’s northern governorates since 2014. Accordingly, the Houthis, in practice, have become an effective force vis-à-vis Saudi Arabia, and Iran can use them to pressure the Saudis.

Houthi missile and drone attacks have repeatedly closed Saudi Arabia’s airports, terminals, and other vital infrastructure. Therefore, it is not an exaggeration to claim that Yemen’s Houthis have become the second most powerful quasi-governmental force in the region after Lebanon’s Hezbollah, both of which are close to Iran. Meanwhile, Saudi Arabia does not have such a leverage.

At the same time, Iran is softening its approach and trying to put an end to the endless conflicts in the region. The problem is that Hassan Rouhani’s government was willing to cooperate with Saudi Arabia from the beginning; however, lobbying groups in Iranian politics have blocked these efforts and tried to thwart Rouhani’s soft policy with provocations such as the attack on the Saudi embassy.

Today, as Rouhani’s term in office draws to an end, he is trying to bring the Saudi case to a conclusion. If the secret talks between Iran and Saudi Arabia mediated by Iraq are successful, the region can see relative stability as the path to peace in the region appears to pass through Tehran and Riyadh. Undoubtedly, even if Iran and Saudi Arabia reach a peaceful settlement in their regional conflicts at present, the deep mistrust between them is likely to continue.

Sayyad Sadri Alibabalu holds a PhD from the Department of Middle Eastern Studies at Sakarya University, Turkey. His studies focus on the foreign policy of regional actors, security, and terrorism in the Middle East. His Twitter account is @SayyadSadri.